Westport Reopens: The View From Vogue

Nina Sankovitch is a talented researcher and gifted writer. Her most recent book — American Rebels: How the Hancock, Adams, and Quincy Families Fanned the Flames of Revolution — is a deep dive into our nation’s fascinating 18th-century founding.

She is also a keen observer of her longtime home town, 21st-century style.

Yesterday, Vogue Daily published her “Letter From Westport: Together Again, But Still at a Distance.”

Sankovitch headed downtown on Friday, the first day many stores were allowed to reopen.

The doors to Anthropologie were open; she did not venture in. She chatted with bespoke clothier Stephen Kempson — outside.

And she checked out Mitchells, where “a deluxe hand-sanitizing-and-mask-station welcomed shoppers.” A host of store personnel greeted her with what she “assumed to be smiles behind their masks.”

But, she wonders, “is a new shirt worth putting on a face mask for?”

Compo Beach is usually a favorite spot for locals, but right now the beach cannot give us what we, as a community, need: a place for us to gather as a community. To watch sunsets, grill dinners, throw frisbees, play pickle ball, basketball, baseball, and softball, hold book groups and hands and beers, all together.

Westport will truly be open when the library flings its doors wide, when the Levitt Pavilion starts holding free concerts again, when restaurant and café tables are filled, when the Senior Center is hopping, when I’m dancing with my fellow aqua-fitters in the Y pool. When we can once again come together as a community—together, yes, even if it means doing so at a safe distance.

This is what Nina Sankovitch is waitingi for.

Posted in Downtown, Local business, Pic of the Day

Do You Hear What I Hear?

In the holiday spirit, there was music a-plenty downtown today.

The Staples High School Orphenians sang outside the Pop’TArt gallery … 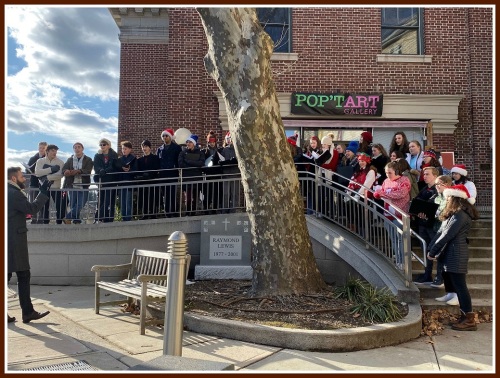 … while across Main Street, the Suzuki School of Music played in front of Anthropologie. 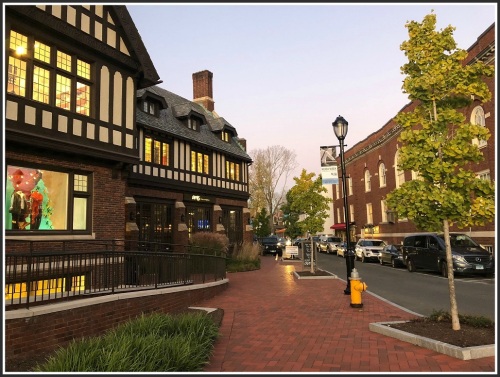 Posted in Downtown, Pic of the Day

Elvira Mae’s opened last week. It took exactly that long for them to jump into their first great help-a-community-member fundraiser.

Lisa Laudico is a Westporter with stage 4 metastatic breast cancer. She’s fighting the disease — and fighting to help others. With the Southport-based Cancer Couch Foundation, she co-founded the #Reason4FreezinMBC social media challenge.

It’s simple: Video yourself eating anything cold hands-free. Nominate 4 people, and donate to MBC research. 100% of all proceeds go to researchers at Memorial Sloan Kettering in New York, and Dana Farber in Boston.

The campaign launched earlier this month on the “Today Show.” Al Roker — and Westport’s own Craig Melvin — challenged other celebrities. Among them: Westporter Jane Green, who nominated Elin Hildebrand and Robin Roberts.

That’s where Elvira Mae’s comes in.

Today (Saturday, July 13, 11 a.m. to 3 p.m.), volunteers will sit outside the Old Mill deli. They’ll hand out flyers, and offer to video anyone doing the challenge. Elvira Mae’s is donating a portion of all ice cream sales to the campaign.

Anhtropologie is helping too. Volunteers will be outside the Church Lane store, doing the same. They’ll hand out popsicles too.

There’s no solicitation of money or checks. Donations can be texted (“freezembc”) to 44321.

Elvira Mae’s and Anthropologie picked a great day to help. This weekend, a challenge grant — in Lisa’s honor — means that every dollar raised becomes $4.

See you at Elvira Mae’s. Or Anthropologie. 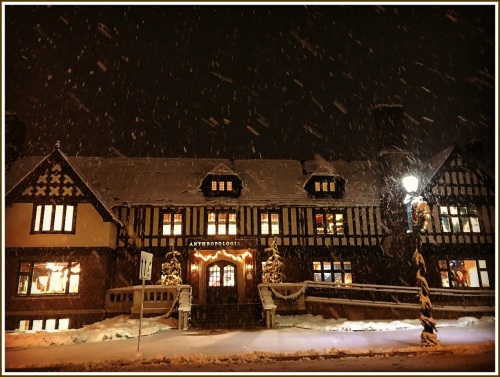 Posted in Downtown, Local business, Pic of the Day, religion

Seen around Westport late this afternoon: 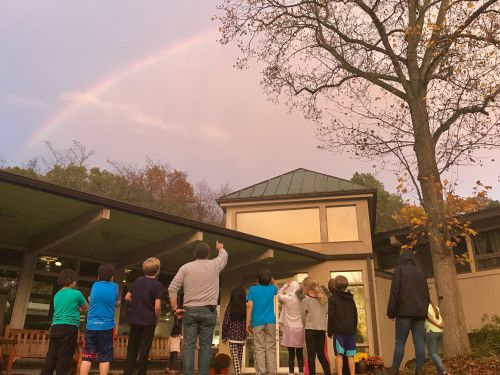 The Story Beneath Bedford Square

The glass-half-full crowd loves Bedford Square: Its retro-yet-fresh look. Its new tenants, including retail, restaurants and residential. Its re-imagining of the entire downtown.

The glass-half-empty folks moan: But there’s no parking!

And — even closer — there’s a garage with up to 120 spaces. In fact, it’s so close it’s right underneath Bedford Square. The entrance is on Elm Street, next to Villa del Sol restaurant. 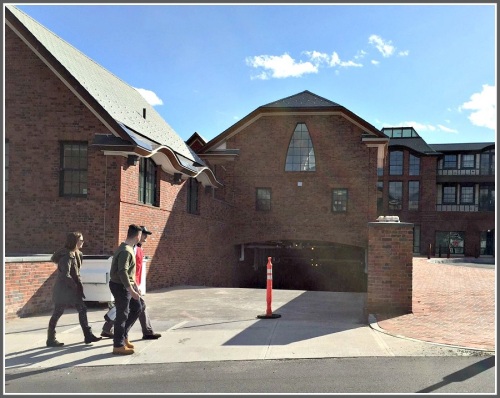 The entrance to the Bedford Square parking garage.

Some spots are reserved for residents and senior employees. But the rest are open to the public.

Right now there’s a valet system, with a drop-off on Church Lane near Amis Trattoria. A 2nd drop-off may be added on Elm Street.

Valet parking is still a work in progress. Developers and Anthropologie are figuring out the best way to use the garage.

But to all the nay-sayers: There are lots more parking spots than you realize.

Now find something else to bitch about.

PS: Meanwhile, Westporters who did not go to the beach this afternoon found a new spot to hang out: the Bedford Square plaza. Here’s the scene, a couple of hours ago: 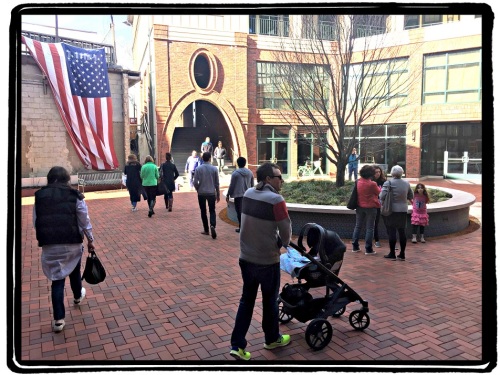 Guests of Anthropologie and Amis restaurant enjoyed a sneak preview tonight of the new Bedford Square.

I’m not in the market for a wedding gown — or most of the rest of what Anthropologie sells. But plenty of folks will be. Judging by the creative and stylish way they’ve repurposed the old YMCA, the 40,000-square foot store will do exactly what an anchor tenant should: draw plenty of shoppers to the entire complex.

And based on what I’ve seen and tasted of Amis, it too will be an instant hit. It takes full advantage of its Church Lane/Post Road/interior alley location — it is a true “trattoria.”

The 2nd floor of Anthropologie. If the view across the Post Road looks familiar, it should: For 30 years, this was the cardio fitness center for the YMCA. 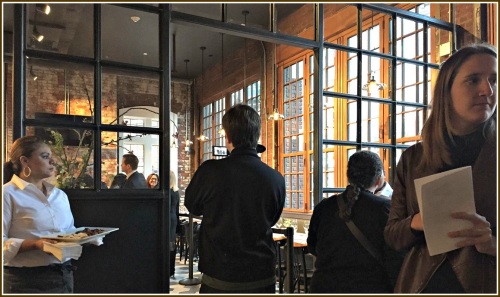 Amis Trattoria. The windows actually open. As soon as the weather warms up, the downtown street scene will be rejuvenated. 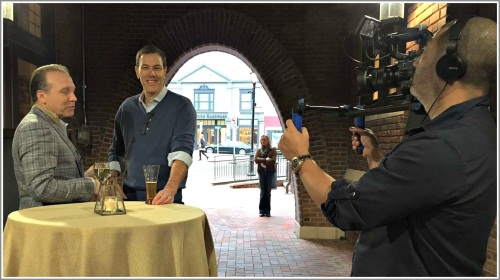 Bedford Square developer David Waldman (center) and lifestyle guru Mar Jennings are interviewed for a TV special. They’re standing in one of the alleyways. Restoration Hardware is visible in the background. 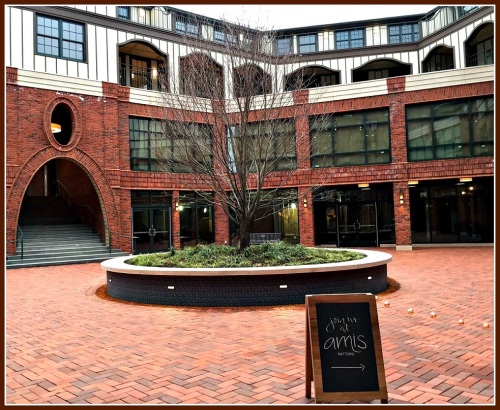 A fountain is the centerpiece of Bedford Square’s courtyard. Shops and restaurants will occupy the first 2 floors; rental apartments are on the 3rd. 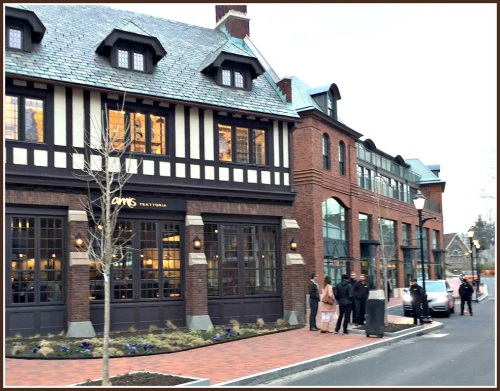 Amis Trattoria occupies what was once the firehouse, and later became part of the YMCA (left). Bedford Square also includes the former site of the Y’s Weeks Pavilion (right), off Church Lane. Seabury Center is in the background.

Changing Of The Guard

As he promised, David Waldman retained the facade of the old Westport YMCA Bedford building.

But as his Bedford Square project nears completion — it’s slated to open this spring — changes are evident. 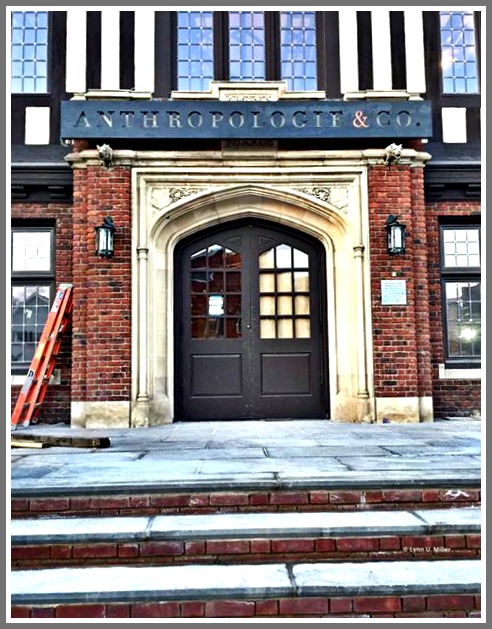 After 94 years, the lintel no longer says “YMCA.”