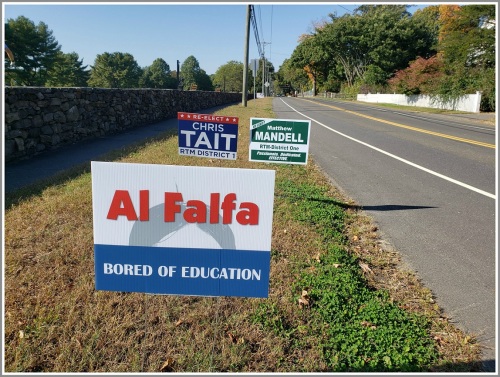 Finally! A candidate we can all agree on. (Photo/Luke Garvey)

Posted in Local politics, Longshore, Pic of the Day

Signing Off On The ’19 Election

As election season heats up, Planning & Zoning Commission member Chip Stephens sent this email to all political parties in town: Democrats, Republicans, Save Westport Now and the Coalition for Westport.

“Let’s see if it works,” he says hopefully.

As P & Z enforcement officers, Al Gratrix and I have worked hard to keep illegal signs at bay. We try our best to keep legal signs, like campaign signs, in proper and legal places, and hope to keep campaign signs away from restricted areas.

Here are the simple rules we hope all will respect:

NOTE : P & Z will not remove campaign signs. Please don’t call the office; it was not us. 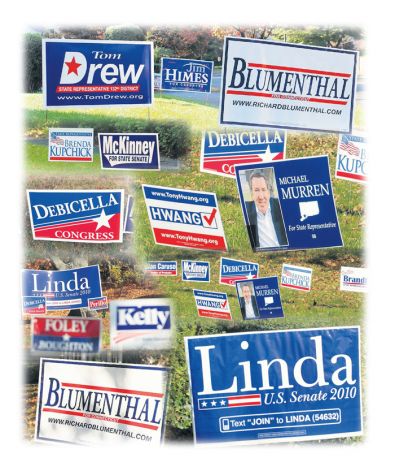 Every year, a few people who don’t like signs or are just bad apples take signs down

Look around where a missing sign was. Often you will find it lying nearby. If state crews removed the sign, you may find it in the sand shed in the state truck property across from Sherwood Diner. (You are allowed to reclaim your signs if they are there.)

Please use common sense, as if it was your property. It is your town, so please try to follow the rules.

Thanks, and good luck to all,

I can’t tell whether he’s a Republican, Democrat or from Mars. It has me intrigued, but I’m not going to vote for him.

He is also quite prolific with his sign placement — though every corner is a bit much.

Earlier today, I posted Amy Ancel’s story about the theft of legal signs for non-profit events. Here’s a re-post from 2017, courtesy of the Westport Police Department:

Unfortunately we have experienced vandalism and theft regarding temporary signs in the past. This type of behavior will not be tolerated. These crimes may lead to criminal charges such as trespassing, criminal mischief and/or larceny.

The following policy has been established by town officials, in order to provide coordination for the placement of temporary signs by Westport non-profit organizations wishing to advertise one-time-only charitable events.  Signs placed on public property advertising a private business or company will be removed. (Bold italics are mine!)

The sign in the foreground is illegal. (Photo/John Karrel)

General Guidelines for ALL Temporary Signs

There are rules for advertising charitable events.

The placement and locations of temporary signs on Town property for the purpose of advertising a charitable event requires review and approval by the Westport police chief, director of Planning and Zoning, and director of Parks & Recreation, or their designated representatives. Qualifying organizations (i.e. local non-profits) may send the attached request, including proposed locations, for the placement of temporary signs to: Selectman’s Office, Westport Town Hall, 110 Myrtle Avenue, Westport, CT 06880 or selectman@westportct.gov.

The following conditions will apply to charitable events:

Please note that this press release pertains to Town of Westport roads, and not state roads, like Route 1, Route 33, Route 57 and Route 136.

Political signs are considered an expression of free speech and are allowed on public property. The General Guidelines noted above apply to temporary signs for political purposes.

Effective immediately, those signs — and all those others crowding town-owned roads, traffic islands and rights-of-way — will be removed.

That’s the promise of the Planning and Zoning Department, according to a press release sent earlier today. It reiterates regulations that have been in place since at least 2002.

Temporary signs advertising charitable events may be placed on town property. They require approval by the chief of police, P&Z director and Parks and Recreation director (or their “designated representatives”). Qualifying organizations (“i.e., local non-profits”) must fill out a request form — including proposed locations.

There’s a maximum of 15 signs for each event. They can’t be placed more than 2 weeks before the event, and must be removed within 2 days. Maximum size is 2 feet by 3 feet.

In addition, signs cannot be placed on school property without permission of the superintendent’s office; or “within the interior of Compo Beach or Longshore”; or on Town Hall property, trees or utility poles, or in any way that interferes with traffic visibility.

Political signs are considered “an expression of free speech,” and are allowed on public property. But the guidelines above — amazingly — also refer to “temporary signs for political purposes.”

Signs on private property require owner’s approval. It is “suggested” that they be removed within 2 days after the publicized event or election.

The town does not control — and is not responsible for — signs on state property. Town guidelines say, “It is not advisable” to place signs on property, rights of way and islands on Route 1, 136, 57, 33 and the Sherwood Island Connector, or the I-95 and Merritt Parkway ramps.

All that info was announced today. Let’s see how much better the town looks tomorrow.

Hey, they did say “effective immediately.”

A Sensible Solution To So Many Signs

Voters are not the only Westporters turned off by political signs.

In fact, they dislike them so much — the expense, the putting-up-and-taking-down, the “arms race” feeling they engender and the animus they create — that one local politician proposes a solution:

Get rid of them entirely.

The idea comes from an RTM candidate. He (or she) agreed not to be named, because the goal here is sanity and a less visually polluted streetscape, not self-promotion.

But here is his (or her) plan:

In the next election cycle, give candidates the option to donate the money they’d otherwise spend on signs to a fund that would create a website. The site would include pertinent information about all candidates who participate, with a link to their own personal web pages.

There would be plenty of publicity, so voters would know which candidates are voluntarily forgoing yard signs, in favor of the website. Each candidate’s financial contribution would be posted on the site.

Each candidate would design their own page. They could write or post as much information as they’d like, including videos.

In addition, each RTM district could hold candidates debates — perhaps at the library. They’d be videotaped, and posted on the website too.

Part of the funds used for signs could instead help rent commercial space downtown. (There’s no shortage of empty stores!) Candidates could have “office hours,” when voters would drop in and ask questions.

Parents could bring their children, to learn about the political process. (After which, they’d all go shopping downtown.) 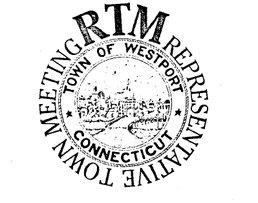 The RTM candidate who suggests this has his (or her) own website. But he (or she) has to walk door to door, and post on social media, to let voters know about it. (Mailing out flyers is prohibitive.)

“I’ve been chased by people and bitten by 3 dogs, among other things,” the candidate says.

“And I can’t blame homeowners. I don’t like it when people come to my door either.

“An opt-in, robust central information repository, and ‘office hours’ for the public to talk to each candidate, just makes more sense to me.”

Hot on the heels of another torrid “06880” discussion, the Westport Police Department notes that they have received “a number of phone calls” regarding the theft of campaign signs. They remind Westporters that this is not exactly legal.

Chief Dale Call says: “The taking of campaign signs from either private or public property that their presence is allowed on will not be tolerated, and is subject to a criminal arrest.”

He offers this alternative: “A better way to indicate a person’s voting preference is at the polls.”