Coronavirus Takes A Toll On The Merritt 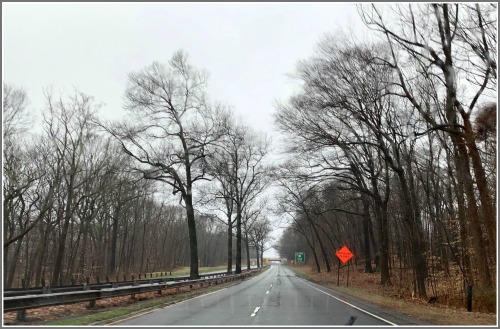 The debate over tolls on Connecticut highways is far from over.

If we ever get them — for all vehicles, trucks only, whatever — they will be the modern, E-ZPass transponder type.

They won’t look anything like the old toll booths that jammed up traffic every few miles on I-95. There was one on the Westport-Norwalk line, just west of Exit 17.

The West Haven tolls, near Exit 43.

They certainly won’t look anything like the rustic toll booths on the Merritt Parkway.

The Greenwich tollbooth, on the Merritt Parkway.

And they definitely will look nothing like the tollbooth that once stood on the east side of the Post Road bridge, in downtown Westport. 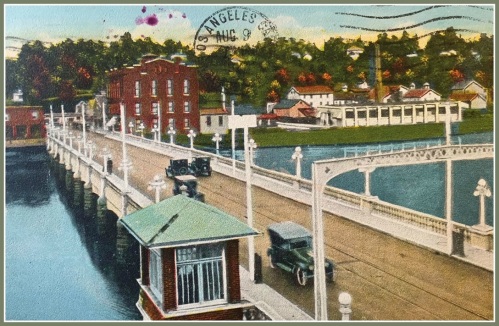 Yes, that really was a thing. The tollbooth was no longer operative, in this 1930s postcard from the collection of Jack Whittle. But at one point — decades (centuries?) earlier — people ponied up to cross the bridge.

In 2016, the state Department of Transportation warned of an urgent need to fix the Newtown Turnpike Merritt Parkway bridge.

Deterioration could lead to capstone and fascia falling hazards, an engineer said. 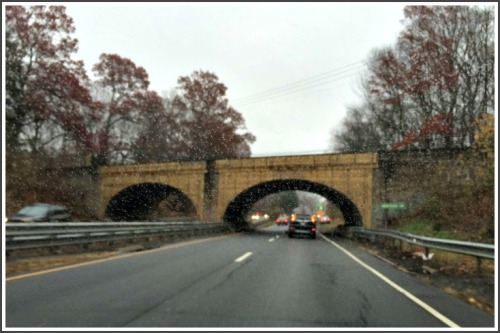 Beginning “on or about June 24,” Newtown Turnpike will be closed between Wilton Road and Crawford Road.

Drivers coming from the south (Norwalk) will be detoured to Cranbury Road, Chestnut Hill Road and Wilton Road. They’ll connect back to Newtown Turnpike north of the Merritt.

Drivers coming from the north will do the reverse, getting back on Newtown Turnpike south of the parkway.

Work is expected to be completed by August 27.

It’s a pain, sure. But so is getting conked on the roof by falling debris.

And it’s better than Greenwich. A similar project there — work on the Lake Avenue Merritt Parkway bridge — will result in a detour of 8 1/2 miles.

Here’s Why North Avenue Is Closed — And The Merritt Will Be, Soon

One of the most treacherous situations is on North Avenue, at the Merritt Parkway overpass. A large tree dangles over the parkway. 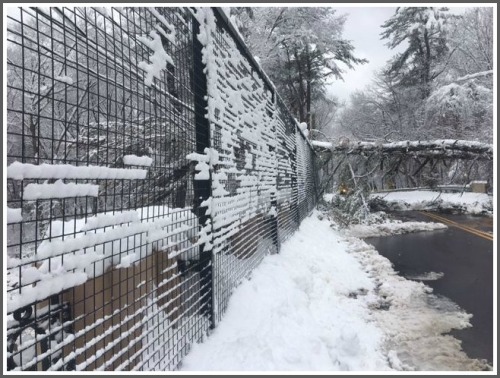 Nearby resident Tommy Greenwald spoke to an Eversource crew. They told him that power would “definitely” be back today.

However, the Merritt was about to be shut down, to clear the tree.

If you’ve got snow photos or stories to share, email dwoog@optonline.net

This morning’s commute on the Merritt Parkway.

Oh, yeah: There were downed train wires in East Norwalk too. 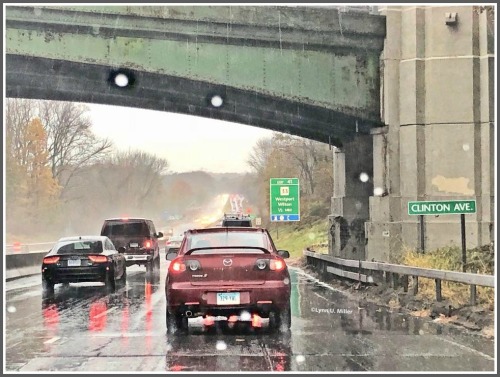 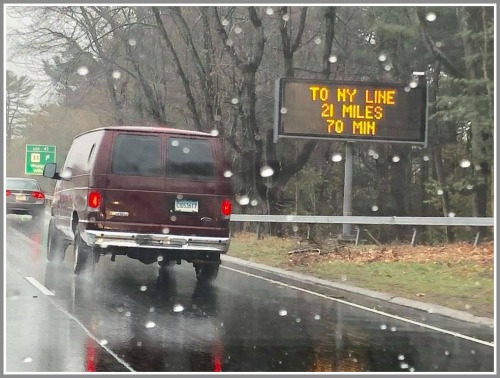 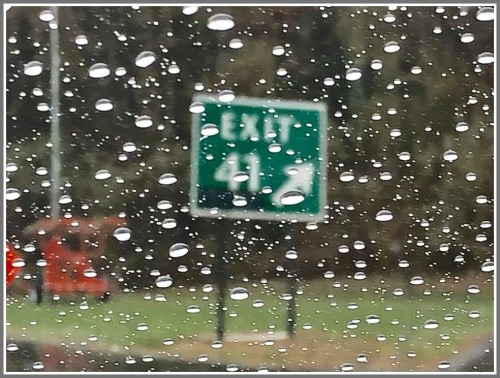 Posted in Pic of the Day, Transportation

Sadly, This Einstein Did Not Stick Around Long Enough To Pick Up His “Driver Of The Year” Award

(You can tell it’s the Merritt, because there’s a fairly large “No Commercial Vehicles” sign.) 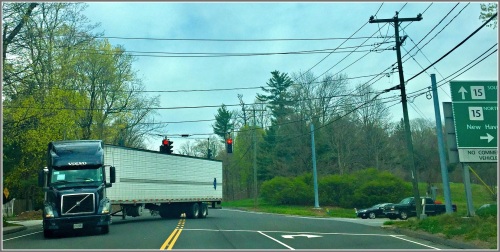 The truck tried getting onto the parkway northbound, when people began to cut it off and blowing their horns. He decided to keep trying for Truck Driver of the Year award for a while. Finally he made a U-turn to go back towards town.

Let’s hope right now he is far, far away.

The good news: The state Department of Transportation is “rehabilitating” 5 miles of the Merritt Parkway — in each direction — in Westport and Fairfield. That means “upgrades” to pavements, guardrails, drainage and “historic concrete.”

Semi-good news: The work will be done “largely” at night. Lane closures will be limited to between 7 p.m. and 8 a.m.

Really bad news: The project will last until August.

No, not this August. Or even next.

One final fun fact: The $56.7 million project is being handled by Manafort Brothers, Inc. 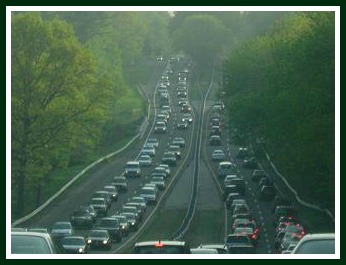 Tolls on Connecticut highways are one step closer to reality. The legislature’s Transportation Committee recently gave the “green light” to the state Department of Transportation to begin the 4-year process of planning to reintroduce the controversial devices.

Tolls were phased out over 30 years ago on I-95 and the Merritt Parkway, following a deadly accident at the Stratford turnpike plaza. New tolls would be electronic.

Toll plazas were a familiar scene on I-95 more than 30 years ago. A proposed bill would establish electronic (E-Z Pass) tolls.

In their previous incarnation, there were tollbooths on I-95 near the Westport-Norwalk border. But they were not the first in the area.

In 1806 the state General Assembly granted a charter to the Connecticut Turnpike Company. They ran the road from Fairfield to Greenwich — today known as the Post Road.

In return for keeping the thoroughfare in “good repair,” they were allowed to establish 4 turnpike gates. One was at the Saugatuck River crossing — now known as the Ruth Steinkraus Cohen Bridge.

The narrow, wooden Post Road bridge, in an early 1900s postcard from Jack Whittle’s collection. Relics of the toll collection system can be seen at the bottom (east bank of the Saugatuck River.

The state granted exemptions for people traveling to attend public worship, funerals, town or freemen’s meetings; those obliged to do military duty; “persons going to and from grist mills with grists”; people living within 1 mile of the toll gates, and “farmers attending their ordinary farming business.”

However — for reasons that are unclear — those exemptions applied only to the 3 other toll gates. The Saugatuck River bridge was not included.

Astonishingly, the toll for automobiles over 150 years later was still 25 cents.

I bet that won’t be the base rate when the new tolls are installed.

For as long as the Red Barn has been on Wilton Road — maybe longer — a sign for the Rotary Club of Westport stood on the side of the road.

Made of handsome cast iron, with a blue background, it noted when and where the club met.

Rick Benson — longtime Rotary member, and the guy you call on whenever something needs doing — had the chains replaced in 1994, and the sign repainted. 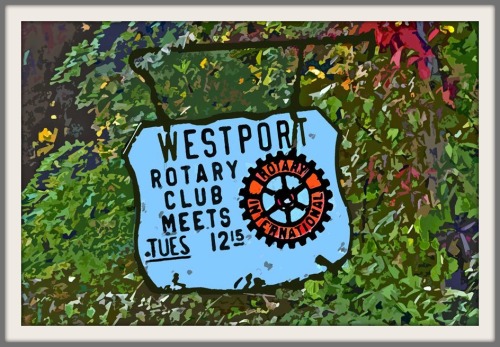 The Rotary Club sign. (Photo and artwork/Lynn U. Miller)

The club is ready to put up new signs at 7 prominent gateways to Westport. One will be at the (former) Red Barn site.

Much to their surprise, members discovered recently that the old sign is gone. All that’s left is a vine-encrusted metal post.

Rick canvassed club members. He called a few folks who might have picked it up for themselves. He checked with the Westport Historical Society.

Because he’s that kind of guy, he even had the area scanned with a metal detector. 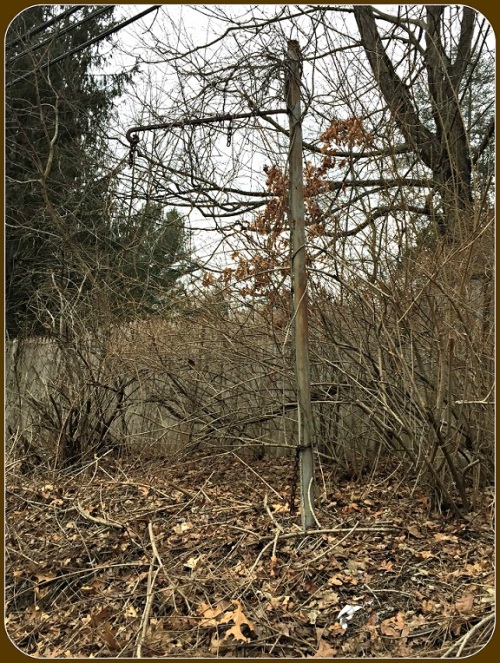 So he’s asking “06880” for help. If you — or anyone you know — has intel on the whereabouts of the Rotary Club’s old sign, email Rick: ben3rb@aol.com.

FUN FACT: The Westport Rotary Club turns 100 on March 7, 2024. That makes it more than a decade older than the Merritt Parkway, whose Exit 41 is near the old (and new) sign.

For years, the Weston Road/Easton Road/North Main Street rotary near Exit 42 — the unofficial “Welcome to Westport” landmark for everyone coming off the Merritt Parkway — was maintained, as a public service, by Daybreak Nursery.

But when financial problems caused the nearby business to close, the triangular plot grew grungy. 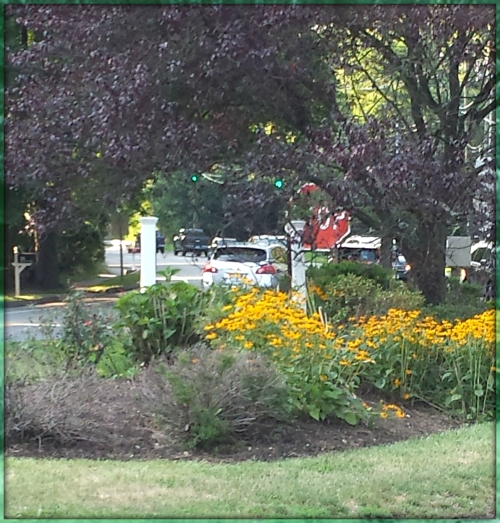 I don’t think it was a state Department of Transportation project. But huge props to whoever got it done.

Just one more reason to avoid I-95, and take the Merritt.