By The Time We Get To Westonstock

“By the time we got to Woodstock we were half a million strong …” Joni Mitchell sang.

Not quite. But a ton of people were at Yasgur’s farm, 49 years ago this month.

There won’t be quite as many at Weston’s Coley Homestead (104 Weston Road) on Saturday, September 15 (2 to 8 p.m.). They won’t get naked, sleep in the mud, and hear Jimi Hendrix, Janis Joplin and Country Joe rock America.

The festival is the finale of the Weston Historical Society’s summer-long retrospective of ’60s music. Exhibits, concerts and forums have explored the impact of rock, psychedelia, folk, Motown, soul and more on our country — and our little slice of Fairfield County.

Like Woodstock though, Westonstock is about more than just music. There’s a ’60s car show, and kids’ activities too. (Those kids are of course the grandchildren of people who were stardust, golden children of God, back in the day.)

All have long and storied musical pedigrees. They’ve played with the Rolling Stones, Buddy Miles, Jimi Hendrix (though not at Woodstock) and many more. 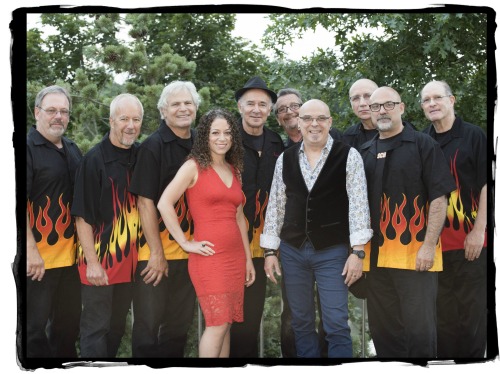 Roger Kaufman (center, with hat) and his Old School Revue.

The cars, meanwhile, will take you back to the days of listening to great music while cruising (or “watching the submarine races”). Many are on loan from Dragone Classic Motors.

Whether you recall the ’60s, can’t remember them (“if you do, you weren’t there,” Grace Slick or Timothy Leary or Robin Williams supposedly said), or were not yet born, Westonstock is for you.

All you need is a blanket, a lawn chair and some patchouli.

Carlson And Gailmor: Reunited (And It Sounds So Good!)

For anyone living in Westport in the early 1970s — or a music coffeehouse fan in New England and nearby — Carlson and Gailmor were close to gods.

Rob Carlson and Jon Gailmor were classmates (and fellow Orphenians) in Staples High School’s Class of 1966. After college (Brown and Penn, respectively), they formed a folk duo.

Their Polydor debut album — “Peaceable Kingdom” — is remains a classic for who heard it.

But before hitting the big time, the singers went their separate ways.

Gailmor moved to Vermont. Running music-writing workshops in schools, and (of course) performing, he’s became an icon. He was actually named an official “state treasure.”

Seven years ago — at their Staples 45th reunion — they sang together for the first time in decades.

They were on stage again last month, at the Weston Historical Society’s “Life in the ’60s” coffeehouse. 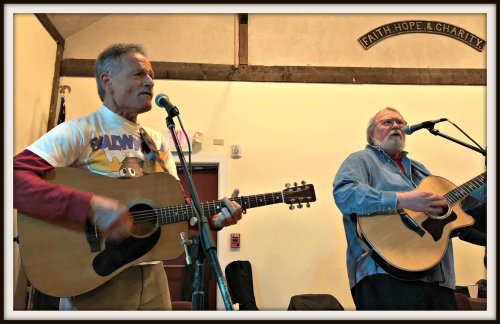 The audience loved them. Apparently, they loved it too.

The next day, Gailmor dropped by Carlson’s Fairfield studio. Backed by Paul Payton (keyboard), they laid down vocals on a ’70s song Carlson always thought they’d do well: King Harvest’s “Dancin’ in the Moonlight.”

Carlson later added Westporter Jeff Southworth’s guitar, and his own son Sam’s drums, and did the final mix.

Let’s hope there are many more ahead.

Of course you can hear it! Just click here.

Rob Carlson: From Westport To Benefit Street, And Back

In a society that celebrates specialization, Rob Carlson is a generalist.

He’s a singer-songwriter. A corporate entertainer. An author. And a lot more.

For over 50 years — even before his 1966 graduation from Staples High School — Carlson has entertained generations of fans. He’s funny and fun. He’s got a wicked eye for the absurd, and a Robin Williams-like talent for picking out a wide range of targets.

Staples played a seminal role in Carlson’s musical career. As president of Orphenians, he helped organize the elite a cappella group’s 1st-ever trip (to the Virgin Islands).

He played trombone (“a useless instrument”), but discovered guitar (“you can actually play chords”). His folk band — the Triumvirate — opened for some of the famous rock bands like the Beau Brummels and Remains who played at Staples.

At Brown University — where he majored in American Civilization — Carlson was part of a burgeoning music scene. His most famous band — Benefit Street — included Staples classmate Josh Barrett. They earned New England renown.

In 1973 Carlson joined another former Staples classmate, Jon Gailmor, in a folk duo. Their Polydor debut album — “Peaceable Kingdom” — is still considered a classic by all who heard it.

But before hitting the big time, the 2 went their separate ways. Carlson headed back to the Virgin Islands, where he fell in love with Caribbean music.

Back in this area, he had a 10-year run playing local spots like  Grassroots and the Tin Whistle.

When his son was born — and Grassroots closed — Carlson got a steady gig running an independent production company. As “Ramblin’ Bob,” he wrote and produced a weekly tune in the style and voice of Bob Dylan, about whatever was happening in the news. The delivery was dead-on.

Christine Lavin heard Carlson in Portland, Maine, and gave his career a boost. He formed the Modern Man trio, which perfected send-ups of songs by the Beach Boys, Chuck Berry and many others. After 15 years, Modern Man played its last gig in October.

Carlson describes his music — reluctantly, because he dislikes categorizing it — as “folk/rock/Americana.” It includes elements of show tunes, R&B, Caribbean — you name it.

He’s “pretty much acoustic. I like the sound of wood.”

Benefit Street has now been reconstituted — with former Westporter Beth Bradley. This month they play the Grange in Greenfield Hill. On November 12, they and Beth Bradley will be at the Westport Unitarian Church’s Voices Cafe.

Befitting an American Civilization major, Carlson spent 30 years — “on and off,” he clarifies — researching and writing “Palatine Ship,” about the legend of an 18th-century vessel lost near Block Island.

But it’s music for which Carlson is best known. His audience, he says, is “mostly boomers. Every generation is fixated on the music it liked between the ages of 13 and 25. That’s pretty much what you like for the rest of your life.”

It’s a life Rob Carlson has known — and embraced — for over half a century. Westporters have long loved his distinctive voice.

It’s a good thing he gave up that useless trombone.

Staples High School’s Class of 1966 has always been special.

Growing up in postwar Westport, then coming of age in high school as a turbulent decade picked up steam, they were an active, accomplished bunch.

The Class of ’66 included 14 National Merit semifinalists, 29 All-State musicians and 5 All-State actors. The Orphenians traveled to the Virgin Islands; student government brought the Beau Brummels and Animals to Staples, and as a gift to the school — a tradition that unfortunately has disappeared — the class donated a handsome sign for the entrance on North Avenue.

But in the 50 years since graduation, the Class of ’66 has really stepped up its game. A few years ago they paid to refurbish the exterior of the Lou Nistico Fieldhouse at Staples, and added lighting to the current North Avenue entry sign. They’ve also organized their own special scholarship fund through Staples Tuition Grants.

Over the years I’ve become friends with many of the members, who I knew only by name and legend as a kid growing up in town. They’ve accomplished amazing things — in music, the arts, journalism, religion, education, even modeling and wine importing — but for half a century they have remained tight and loving. (Very, very fun-loving too).

A number of them remain — or became — reconnected to their hometown through “06880.” I’ve been honored to be a guest at their 2 most recent reunions.

This year’s 50th was fantastic. It began Friday night at the VFW (with kick-ass music from, among others, Rob Carlson, Jon Gailmor and Roger Kaufman). It continued with a lobster dinner last night at the Westport Woman’s Club (and a moving memorial to the 65 classmates who have died). It ended this afternoon at the beach. 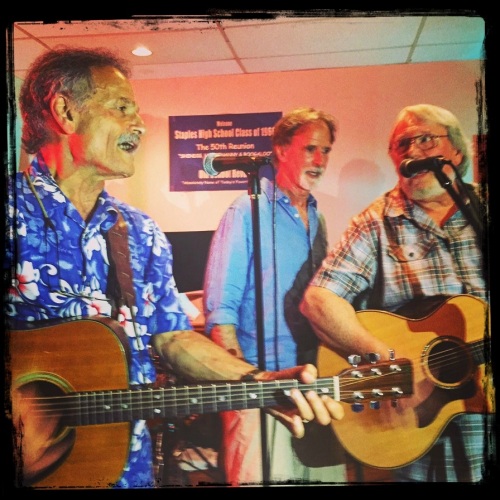 There were many highlights for me, as I mingled with so many heroes and heroines from my youth. But the coolest came as I was leaving.

Each class member received a goody bag. In every one was a stone — collected, over a long time, from Compo Beach. They were stamped “Staples High 50th reunion, Class of 1966.”

And wrapped around them were these words:

Each stone carries memories created by the gentle and loving spirit of Compo Beach — our playground, our retreat, the safe haven of our youth. Compo loves us unconditionally. It is the beautiful link that will — like each stone and echoes of friendships — last forever.

While they were growing up, the members of the Class of 1966 — like most teenagers — probably did not realize the gifts they were gaining from their school, and town. I did not realize it several years later, and kids today don’t either.

The passage of time does something powerful and good. But it takes a special group of people to actually stop, think about and honor that time.