You may not know the name Charlene Margot Girden.

But you probably knew her.

She befriended everyone she met: the hair salon staff and its patrons, restaurant owners, dry cleaners, merchants — you name it.

Charlene grew up in East Norwalk, but her roots in Westport were strong and deep.

Her grandmother lived on Compo Beach. Charlene spent her childhood there with families like the Lanes and Cunninghams.

Her father, Norman Tobin, founded Saugatuck Grain and Supply in 1911, and owned nearly the entire block of Railroad Place. She learned at a young age how to collect rents, talk to tenants and be a good landlord.

She also set up deliveries — and delivered oil — with and for her father. 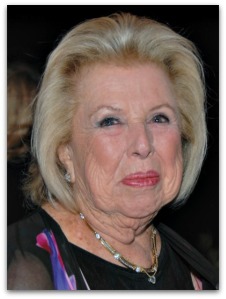 Norman died in 1992. Sophie — his wife of 62 years — took over the reins. When she died 12 years later, Charlene became president and CEO of Saugatuck Grain, Hanes Realty and several other companies.

Some of her favorite spots were Vincent Palumbo Salon, Mitchell’s, Party Hardy, Westport Hardware, Stiles Market, Final Touch Cleaners, Posh, Tutti’s, Tarantino’s and Pane e Bene. Like “Cheers,” at all those places everyone knew her name.

She supported many charities, including the American Cancer Society, American Heart Association, the Actors Fund and the Metropolitan Golf Association Caddy Scholarship. (She learned to play at Longshore in the late 1940s, and was an avid golfer for the rest of her life. She also loved tennis.)

Charlene died last week, at 83. As word spread, her children were flooded with phone calls, emails, texts and notes about her. Everyone, it seemed, had a story.

Charlene was predeceased by her husband of 53 years, Eugene Girden. She is survived by her daughter Lisa Girden-Barkan, her son Steve Girden, and her grandchildren Lindsay Girden, Alex Girden and Emelie Wittenberg.

and the American Heart Association

A pair of storefronts on Railroad Place (Photos/Betsy P. Kahn)

Posted in Local business, Pic of the Day, Saugatuck

Posted in Pic of the Day, Saugatuck

The Coalition for Westport — a non-partisan group originally formed to seek election to the Planning & Zoning Commission — commended Marpe for establishing the committee, then sent this note to co-chair Mary Young:

The time is right for the Saugatuck area to be carefully studied. It is attractive to residents, visitors and developers for a variety of reasons: It is the historical root of Westport; it provides attractive access to the river; it is a destination for foodies and perhaps most importantly, it is a primary transit hub.

What is more, many of the buildings in the area defined as Saugatuck in the Town Plan of Conservation and Development retain features of their original design and construction, despite having been repurposed.

The challenge for land use agencies and planners is a classic balancing act: What shall be saved and what replaced? Do we envision the area as a 2nd downtown? Or, as seems lost likely and most prudent, do we encourage/require a mix of controlled residential (including multi-family and affordable housing within walking distance to the train station) and commercial development which respects the scale and character of the neighborhood?

The Coalition believes that Saugatuck should retain its historical heritage and small town character. Therefore we support an expanded and enhanced neighborhood concept rather than the idea of a 2nd downtown. We come down squarely in favor of a mixed-use plan favoring residential expansion and enhanced essential services — local businesses, to cater to the requirements of the residential population that will need a pharmacy, hardware store, market and other essential services not now present in the area, which can be provided in a “mom and pop” form without competing with Main Street retail. We also foresee new retail and dining services that would attract additional visitors.

One area that can and should be developed for those types of commercial uses is Railroad Place. This can be done without sacrificing the architectural features or facades at the easterly end of the street which are deemed worth preserving. A drop-off lane could also be created for the station.

The Coalition recommends that the remainder of the square block (with the possible exception of the office building) be devoted to a mix of housing types — 1-, 2- and 3-bedroom apartments and townhouses, both rental and condos — with adequate parking and passive open space. An appropriate percentage should be truly affordable. 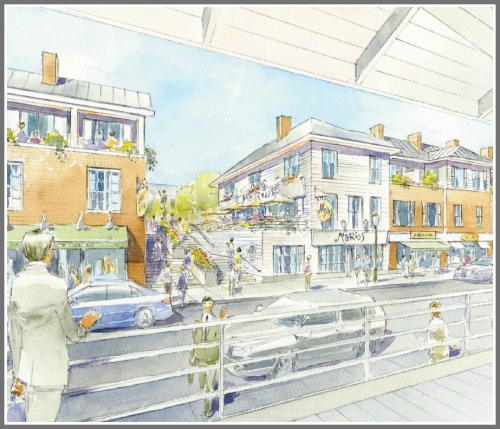 LandTech has already developed plans for a mixed-use development at a new Railroad Place. Mario’s is, of course, now Harvest restaurant.

To address the ever-present need for additional railroad parking, we urge adoption of a “Transit District” zoning regulation that provides an incentive to private developers to create parking to be administered by the town, in exchange for increased (but controlled) development density calculated in accordance with a regulatory formula.

Saugatuck residents will need relief from additional vehicular traffic. Therefore both additional visitor and commuter parking should be created — most efficiently at, above or below grade in the ordinary course of construction.

The Coalition would also support traffic flow rerouting plans that would alleviate congestion without any major construction or disruption for residents.

We encourage the new Saugatuck Steering Committee and P&Z to adopt a plan that implements these thoughts, and to coordinate efforts to arrive at a consensus to be formalized in the 2017 Town Plan of Conservation and Development.

Tonight, they give it away.

The ceremony is low-key, but warm and inspiring.

And very, very important. Contrary to myth, there is plenty of need right here in Westport.

Fred Cantor did not receive an STG grant when he graduated from Staples in 1971. He no longer has formal ties to the school; he’s just a proud alum.

But the longtime Westporter is eager to give back. Recently, he found a unique way to do so.

They’re displayed on gift items like luggage tags, coffee mugs, magnets, note cards and tote bags. They’re on sale to the public — with all profits going to the scholarship organization.

Actually, they’ll go to one specific fund: the STG award named after Chou Chou Merrill. The 1970 grad reveled in her childhood and youth here — the memories she shared, the friendships she nurtured, the opportunities she was given. She died in 2014.

A luggage tag, with an image of the Longshore entrance.

Fred says that the photos and souvenirs are a perfect way for Westporters, current and spread around the globe, to show their affection for this town. And help a great cause.

How generous of Fred — an avid “06880” reader — to think of Staples Tuition Grants in this way.

How fitting that he’s chosen Chou Chou’s scholarship to be the recipient of his generosity.

Now all you have to do is click here for a great Fred Cantor-themed/Westport-style/STG-assisting souvenir. (NOTE: More items will be added soon!) 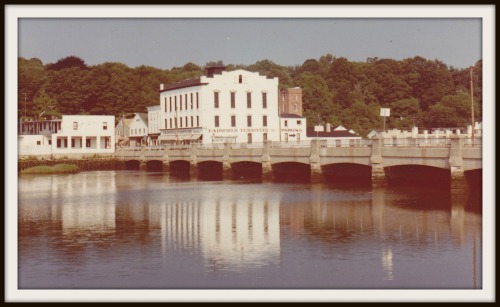 The opening of Harvest restaurant — in the former Mario’s space — has brought renewed attention to Railroad Place.

It’s also reminded people of the long-rumored Railroad Place project — a redevelopment plan for a larger area that shares the name of the small but significant street on the westbound side of the railroad station.

It’s unrelated — who’s-who-wise — to the Gault family’s Saugatuck Center work. But it’s been rumored for years, as a natural next step.

Negotiations have proceeded, in fits and starts, since 2011. In 2012, LandTech — the highly regarded engineering and planning firm headquartered on Riverside Avenue — drew up an RFP for the families who have owned the property for nearly 100 years, to seek developers.

It involved all the land bordered by Railroad Place, Charles Street and Riverside Avenue, as well as the private parking lot adjacent to Luciano Park.

All the land, that is, except the Mario’s/Harvest building, and the grim, out-of-character office building at 21 Charles Street. They have their own owners. All the rest of the property in the plan is owned by 2 families.

An aerial view of the proposed Railroad Place development. Charles Street (including the office building) is at left; the train tracks run diagonally across the top. Luciano Park is at the bottom. Click on or hover over to enlarge.

Steps next to Harvest will lead to a bluestone plaza, similar to the one between the Whelk and Saugatuck Sweets that draws musicians, sunbathers and people-watchers. 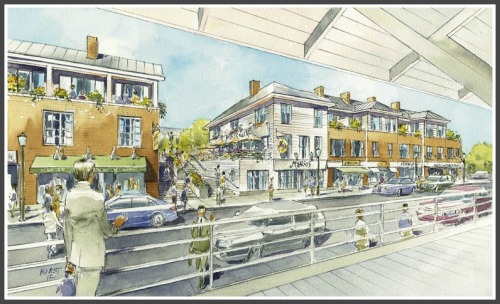 A view from the westbound train platform across Railroad Place.

Surrounding the plaza will be a mix of retail stores and apartments. There’s room for a small movie theater and boutique hotel.

A closeup of the rendering above. Mario’s is, of course, now Harvest restaurant.

It’s not a done deal, of course. The 4-story development would need a zone change, to embrace Transit-Oriented Development (programs to link transportation centers with surrounding neighborhoods). The floor area ration would require a text amendment. 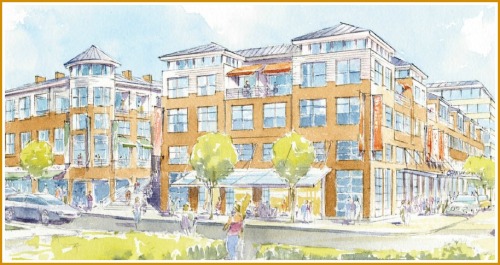 The view across Riverside Avenue, from Tutti’s. The buildings in the artist’s rendering would replace the current cleaners and adjacent buildings. The Charles Street office building is on the far right.

The project has moved very slowly, in part because of land valuation questions. No developer has yet signed on.

But Railroad Place — the property — is an unpolished gem, waiting to shine. Bordered by existing businesses and a train station — with a major highway nearby — it’s ripe for development. 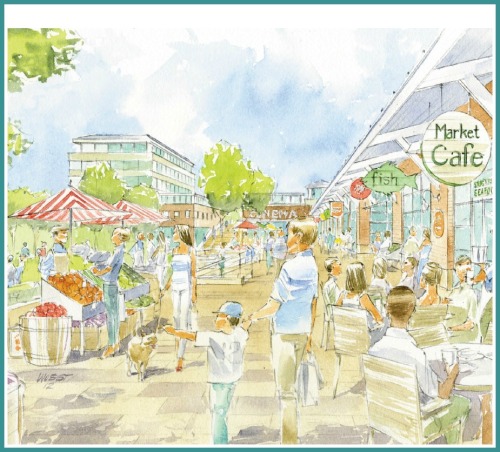 Stores and shops in the proposed Railroad Place development.

Exciting plans have been available for several years. They’ve been shopped around, creating excitement among everyone who’s seen them.

The 2 families that own most of Railroad Place have not yet agreed on the next steps. When — that is, if — they do, the future of one of Westport’s most intriguing, often-underutilized sections of town could be very, very cool.