As Westport restaurant owners get ready to reopen — outdoors only, with tables 6 feet apart and no bar service — one resident has an idea to help them succeed.

The other day, David Basich and his wife Vanessa took a walk by the train station. A daily New York commuter before COVID-19, this was his first time there in nearly 10 weeks.

That got him thinking. David says:

As I looked at the restaurants on Railroad Place — Tarantino, Harvest, Romamacci — I reflected on how tough it’s been for them (and all other restaurants around town).

I started thinking about what would put them in a position to best optimize the situation when they are able to reopen, and what would make patrons comfortable coming back. I know outdoor dining is one possible solution.

I thought it would be great if we could close down entirely the street that runs past them, and open it up entirely for outdoor seating.

Railroad Place has been closed before — for the annual Slice of Saugatuck festival.

We talked with Graziano, the owner of Romanacci, about the idea. They are the only one thus far that had carved out some small space.

Closing down the entire street would open it up even more. Restaurant-goers would feel more comfortable overall if some capacity could move outside, social distancing could be maintained more easily, and of course this would create a pretty unique al fresco dining row for Westport.

Regarding the impact on commuters, I don’t think closing this street would be too great of a hardship (at least for a while). I imagine Metro-North numbers will be down for the foreseeable future.

However, to alleviate some of the hassle, the one-way portion of Railroad Place that runs north past the parking lot off Charles Street, could be opened up to two-way traffic.

We could try this for a while — maybe through Labor Day — and readjust as things evolve.

I don’t know exactly what this would entail and how much of a hassle it would be. But I do know Westporters love our town, love dining out, and want to see these business given the best chance to survive.

“06880” readers: What do you think? Is this a good idea? Are there other places in town that could benefit from something similar? Click “Comments” below! 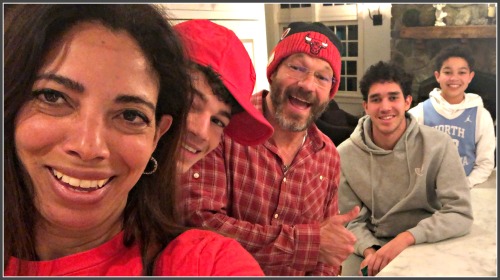 If you play the popular Westport game — “Where should we go for dinner?” — your options always change.

This week was particularly head-swiveling.

Here’s an update. NOTE: I wrote this last night, so it might not be the latest news.

Jasmine — closed since 2010 — may reopen as the Blue Parrot by October. The landmark building at the corner of Saugatuck Avenue and Charles Street — known for 44 years as the Arrow — will feature live music.

That’s a no-brainer. There’s a lack of those places in town — and the new owner is Adam Lubarsky. The 1973 Staples grad was the long-time owner of the Georgetown Saloon, one of the shit-kickingest music venues around. 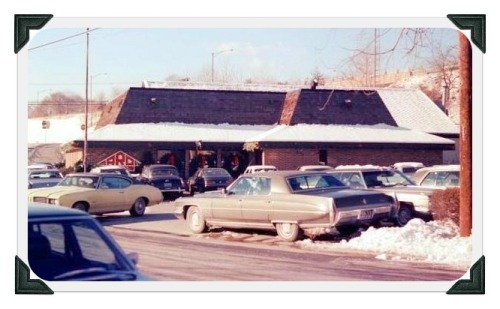 The Arrow restaurant became Jasmine. This fall, it will reopen as the Blue Parrot.

Around the corner, Saugatuck Grain and Grape — a liquor store — earned a Planning and Zoning Commission 5-space parking waiver to open a wine bar at 40 Railroad Place. The spot is currently a realty company. But the block — across from the westbound railroad station platform — is a hospitable place for eating and drinking. Mario’s and Tarantino have been there forever.

As previously reported, plans are moving ahead for 2 new places on the west bank of the Saugatuck River, near National Hall: Safita (Mid-Eastern) and Moja (Brazilian sushi).

Of course, when one (restaurant) door opens, another closes. V — a 15-year mainstay on the Post Road near Maple Avenue — closed last Sunday. The reason had nothing to do with business; it was one of Westport’s most popular basic- food-in-a-nice-atmosphere places. An old-fashioned lease dispute did V in.

Meanwhile, Energy Kitchen — a small chain offering grilled, baked or steamed items, all under 500 calories — will have to wait a bit longer before offering its “fast food, not fat food.”

The P&Z held off voting on Energy Kitchen’s application, citing parking issues in the proposed Playhouse Square location. While the restaurant’s consultant, former P&Z director Mel Barr, said there was plenty of space — he said a 14-day lunch-hour survey showed an average of 14 spots — the P&Z was not buying it.

I don’t either. I live in the condos right behind Playhouse Square, so you can accuse me of NIMFY on this. But if you’ve been in that lot lately — for the post office, the new Achorn Pharmacy, the long-established Organic Market or anyplace else — you know there are seldom 2.7 parking spaces available, let alone 27.

Finally, Terrain. The new garden shop next to the fire station has drawn much attention for its wide variety of plants and garden goods (plus its own parking problems). 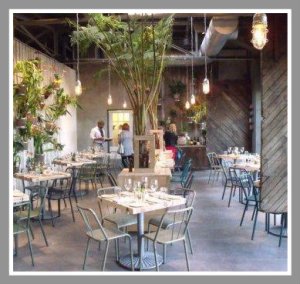 Terrain’s restaurant — before the rush.

But there’s a restaurant there too — quite a popular one, my spies say.

There are still a few kinks in the kitchen. Yet the staff works very creatively to solve them. Check out this review by interior designer Olga Adler, on her blog. (Hat tip to alert “06880” reader William Adler, for sending this along).

I was very excited about dining at Terrain, as it is run by people who support locally grown food and only use fresh and organic ingredients. I had high expectations. I wanted to see lots of vegetarian and vegan options.

We arrived on time and even though we had a reservation we were seated at a table all the way in the back and just 2 feet from the kitchen door. …After a short wait we were led outside by an unapologetic hostess. We liked the setting and got immediately lost in a conversation.

I studied (my menu), only to realize there is only one vegetarian option in entrees – the dreaded “vegetarian platter.” I ordered fish instead and moved on. William, also scared of the “platter” ordered a bunch of sides – a vegetarian’s rescue in vegetarian-unfriendly eateries.

About 20 minutes later (as I pictured my fish slowly cooking on the grill) our waitress (who saved the evening with her good sense of humor and desserts on the house) informed us that the kitchen ran out of fish. She asked me and my friend to choose a replacement, but gave us hope that the chef may find another kind of fish after all.

I wanted to find out where exactly he would go fishing at that late hour. It turned out a fish scout was sent to Whole Foods, in an attempt to save our original order. Meanwhile, we were almost done with the first bottle of wine and the situation seemed more funny than annoying.

The salads arrived and they were OK. The second bottle of wine was even better than the first (isn’t that always the case?) and finally we got the good news – the fish is here and ready!

My dish was very good, William liked his veggie combo, and by the time the free deserts arrived we were happy.