As Westporters get ready for another summer of golf, tennis, swimming, boating, sailing and dining at Longshore, it’s fascinating to look at how folks spent their days there, back in the day:

Click on or hover over to enlarge. (Photo courtesy of Paul Ehrismann)

That day was, of course, when Longshore was a private club — not a town-owned facility.

Formally dressed couples ate under umbrellas. A band played; above them, others danced. A lily pond added to the country club atmosphere.

If you remember those days — or (more likely) heard about them from others — click “Comments” below.

Don’t ask me how, but spectacularly alert reader Mary Gai spotted this ad, from the Norwalk Hour of October 27, 1948:

That’s it. I had never heard of a seaplane base — or a Sea Wings Club — ever.

A fairly thorough search did not turn up any photos, either.

Pretty amazing for an organization that was around for at least 10 years.

Inquiring minds want to know more. If you have any information about seaplanes in Westport — or can find photos — click “Comments” below. Or email dwoog@optonline.net.

Our seaplane story — with the lowest rates “in the history of aviation” — deserves to be told.

Posted in Longshore, Looking back, Transportation

That Beach At Longshore? Don’t Laugh.

Yesterday’s post — about some mis-captioned photos at Joey’s, one of which refers to Compo as “Longshore Beach” — sent Scott Smith scurrying to his files.

Four years ago, he chaired Longshore’s 50th anniversary celebration. (That’s 50 years as a town-owned facility. For 30 years before that, it was a private club.)

Scott dug up some interesting memorabilia. It shows that — once upon a time — there reaally was a “Longshore beach.”

Here’s a marketing piece from its country club days:

Sure, any artist could draw a nice beach. (And add tons of watercraft.)

Longshore is at the left. Note how much beach there was — and not only near the pool but all the way west, near what is now Hendricks Point.

In the mid-1960s, after the town bought the club (for the best $1.9 million ever spent — if we hadn’t acted fast, it would have sold as 184 building lots), Longshore looked like this:

There was still plenty of beach (and moss-covered rocks). Longshore Sailing School was quite a bit smaller then.

But no trip down Longshore’s memory lane is complete without this:

Referred to as both a “tower” and “lighthouse,” it sat near the present pavilion entrance to the pool area. It was torn down in the 1960s.

All that remain today are memories — of that very cool structure, and the sandy “Longshore beach.”

Posted in Longshore, Looking back, People

It’s an urban — well, suburban, legend — that happens to be true: Babe Ruth really did play golf at Longshore.

As George Albano — the elephant-memoried Norwalk Hour sports columnist —noted in June, the Bambino spent a week in the summer of 1946 at the River Lane home of Dr. Vito Caselnova, a longtime friend. The doctor was chairman of the golf committee at Longshore, at that time a private club.

The next day, Hour sports editor Williard Williams wrote that Ruth “did not dub a shot. His drive was good, his approach shots excellent, and his putting almost perfect.

“In between his golf, he shook hands with scores of persons introduced to him on the course and took care of autographs for the youngsters who swarmed all over him. The Babe was as gracious as ever and seemed to enjoy it all.”

Ruth also visited Norwalk Hospital, where he visited Westport firefighters injured in a horrific Post Road truck blaze. He signed baseballs for — among others —  brothers Nookie and Chick Powers. Both had been legendary athletes at Staples.

Just 2 years later, Ruth was dead from cancer. It started in his throat, and moved to his brain.

When he stayed with us he used to complain about headaches. He would come downstairs in the morning, go right to the refrigerator, and pull out a can of beer. Not to drink it, but to rub the cold can over his head. He said it made him feel better.

Those Ruthian stories popped up yesterday. Alert “06880” reader Seth Schachter spotted the scorecard from that June 26, 1946 round on eBay.

Salzburg On The Saugatuck?

Westporters are proud of our protests.

The Nike missile site, a nuclear power plant on Cockenoe Island, moving the Y from downtown — win or lose, we love to fight.

And we did it long before Westport became a baby boom ‘burb. Alert “06880” reader Mary Palmieri Gai has unearthed 2 fascinating Time magazine stories from 1938. Had a group of protesters not prevailed, Westport might look very different today.

On March 28, 1938 Time reported that Westport was bidding to become the next Salzburg, Austria — a world musical capital.

While this would still leave Westport “trailing in competition with such established U. S. summer festivals as the Berkshire, Hollywood Bowl, St. Louis Municipal Opera, and Manhattan Lewisohn Stadium,” Time said, “such Westporters as van Loon, Grace Moore and Lawrence Tibbett hope for glamorous future expansion, to help keep American music lovers from stumping off to Europe every summer.”

Westporter Patrick A. Powers — “an enterprising Irishman, onetime backer of Walt Disney,” and organizer of a forerunner of RKO, had already purchased a 200-acre estate, where he built the Longshore Country Club. In mid-March he “promised Westporters a great gift: he would build a $100,000 ‘marine stadium’ at Westport” — presumably Longshore — and lease it to Friends of Music for $1 a year.

Longshore Country Club, back in the day. What a perfect site for a “marine stadium”!

It did not take long for Westporters to howl. The following week, Time reported:

200 embattled citizens of arty Westport, Conn, nearly shattered the rafters of their Town Hall with furious protests against the plan to make Westport a “Salzburg on the Saugatuck”…. Following the meeting, Westport’s Board of Zoning Appeals refused to grant Millionaire Patrick A. Powers a permit to continue construction on his $100,000 “Dream Stadium.”

Protesting Westporters, preferring rural quiet to culture and glory, feared that their “simple” village would be turned into a Connecticut Coney Island instead of an American Salzburg. “We don’t want to be the Salzburg of America,” declared one anxious Westporter. “We want to die in peace.”

So did those protesters exactly 75 years ago get it right? Or would it be pretty cool if today Westport was known worldwide as “Salzburg on the Saugatuck”?

Raise your voices. Hit “Comments” to join the debate.

Posted in Longshore, Looking back, People 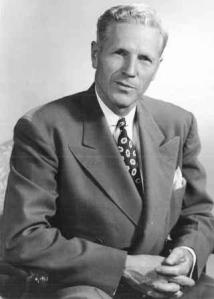 This year’s event (Wednesday, June 9) is different.  To celebrate the 50th anniversary of the town’s purchase of Longshore, then-1st selectman Herb Baldwin will be feted.

But this is no hollow let’s-thank-a-dead-guy thought.  Several relatives — including Baldwin’s daughter Phyllis, and 3 grandchildren — are coming from as far away as Indianapolis and Menlo Park, California.

Some will play in the golf tournament.  All will join in the 4 p.m. ceremony that will look back on Baldwin’s role in those lightning-quick 18 days, when Westport raced from “wow, Longshore Country Club is on the market” to a signed, $1.9 million contract to buy all 169 acres.

Allen Raymond — current town historian, and past member of Baldwin’s kitchen cabinet that helped seal the deal — will be there too.

So who was Herb Baldwin?

He arrived in Westport soon after serving in World War I.  In the same year he got married — seems like he always moved quickly — he bought 20 acres of Bayberry Lane land.

With no experience — and no capital behind him — he planted a thousand apple trees, and hundreds of rows of vegetables.

He soon became a successful apple grower.  But he found time for plenty of volunteer work too.

He chaired both the Westport and state YMCAs, and served on the national Y council.

He taught Sunday school at Saugatuck Congregational Church, then became deacon emeritus, chairman of the state Congregational organization and a national commiteeman.  When the church moved — on logs — across the Post Road to its present location, Baldwin was on the engineering committee.

He entered politics in 1919, as a member of the Board of Tax Review.  He remained on it for 17 years, and was elected chairman.  He was a deputy judge of the Town Court, until laymen were barred from serving.

He spent 18 years in Hartford as a state assemblyman and senator, eventually chairing the Appropriations Committee.  Back in Westport, he was selected as the 2nd moderator ever of the RTM. 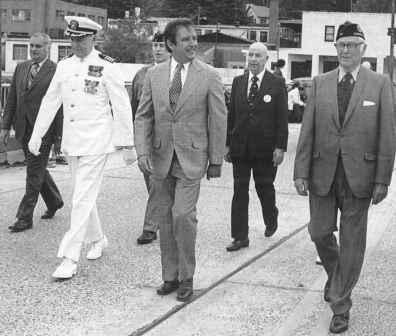 When 1st selectman became a full-time position in 1957, Baldwin was elected.  Early in his tenure he eliminated 28 sources of raw drainage from the Saugatuck River; soon, fish returned.  Roads in Saugatuck Shores were raised, preventing flooding.  Two new schools were built.

When Longshore was put on the market — in an area zoned for 1-acre housing — Baldwin shepherded the town’s purchase plan through both the RTM and Board of Finance.  Instantly, Westport was the 1st town in the country to own a country club.

Later in his 5 terms as 1st selectman he championed DDD zoning, allowing businesses like Glendinning (off Weston Road) and Stauffer (Nyala Farms) to build in residentially zoned areas.  Some Westporters opposed the moves — though the buildings were as discreet as offices could be, and the tax rolls benefited handsomely.

Baldwin Parking Lot — named for him — off Elm Street alleviated downtown parking problems (though several old homes were demolished in the process).

Baldwin retired in 1967, age 73.  In retirement he played bridge, backgammon, chess — and golf.  (He stopped in his early 90s — because his clubs were stolen out of his car trunk.)

“We’ve got our health, our family, and we’ve been able to serve our community for 67 years.  What else could anybody want?”

Well, how about being remembered a quarter-century later for your role in preserving a property that has since become the most beloved purchase in our 175 year history?

(Wednesday’s golf tournament begins at 8:30 a.m.; tennis follows at 9 a.m.  Both events are at Longshore.)