Last weekend’s “06880” post about Westport’s leaf collection program — which included a brief note at the end about the alternative of composting — drew approving comments from readers.

Alert — and environmentally conscious — reader Bill Kutik followed up with some information on alternatives to leaf blowers from Aspetuck Land Trust. They say:

Hate the sound of leaf blowers ?

Here are 3 simple steps this fall to do less, and help nature more.

Leaves are not litter! Mulch mow these leaves right into the lawn. This adds organic matter and nutrients to the soil, which is good for the grass, prevents weeds, and reduces need for fertilizer in the spring. Here’s a video about how to mulch mow. It really is as simple as mowing over the leaves on the lawn.

Leave leaves in your garden beds. They will decompose, adding nutrients and organic matter to your soil, improving drainage and water retention as well as feeding beneficial microorganisms in the soil.

If you must cut back your plants, just leave the cuttings in the bed so the insects and birds can benefit from them. Birds also love last season’s garden debris for spring nest building.

Ease up on the Leaf Blower

If you love nature, ease up on the leaf blower. Aside from the horrendous noise (90-120 decibels) — which in itself is harmful to all sorts of creatures (including human’s ears) — butterfly eggs will be blown far away; luna moths wrapped in leaves will be totally blasted, and frogs and salamanders, snuggled in moist seclusion, will be ripped apart by hurricane-force winds (180-200mph).

If you use landscapers, please tell them you don’t want them using leaf blowers anywhere except on hardscapes. Mulch-mow the lawns. and let nature settle down for the winter.

Leaves are not litter; they are nutrients for your lawn and garden. Leave them on your property. It’s less work for you — and it’s better for the planet.

(For more details on what to do with autumn leaves, click here.) 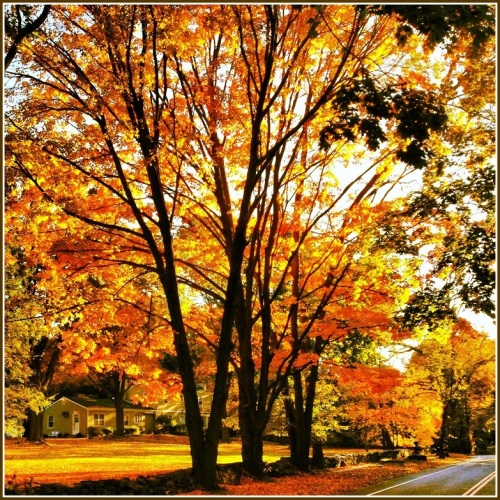 Eventually, fall leaves fall. What are you going to do with those leaves? (Photo/Andrew Colabella)

Alert “06880” reader/concerned moviegoer Bill Kutik was one of many Westporters at last night’s meeting in Norwalk. The subject: the fate of Garden Cinemas, the indie/foreign film theater threatened by demolition. Bill writes:

Responding to an enormous public outcry, the Norwalk Common Council postponed voting on the controversial development plan that would have torn down the Garden Cinemas art movie house for a parking garage.

Mayor Harry Rilling opened the SRO meeting by announcing tabling the matter until September 10 after receiving a petition with nearly 3,000 signatures gathered online by the Wall Street Neighborhood Association.

Until the petition, the destruction vote had seemed like a done deal. “Pave paradise and put up a parking lot,” as Joni Mitchell used to sing.

The 22 people signed up to speak against the plan addressed the SRO crowd of Norwalk and Westport residents anyway – to cheers and applause.

I helped the opposition – www.WallStreetCT.org – and spoke because I moved to Westport 20 years ago after decades in Manhattan precisely because the Garden and Gold’s (substituting for Zabar’s) offered just enough of home to make me feel comfortable.

Some speakers criticized the modern design of the 101-unit rental apartment building on Wall Street in a federally designated Historic District. Others criticized the trickle of taxes it would produce for Norwalk after the city and state granted large tax credits for it being “affordable housing.”

But most expressed their love for the independent theater: the only one showing non-Hollywood and foreign films on four screens between Westport and Manhattan! The Avon shows some in Stamford.

And alluded to the absurdity of tearing down this amazing suburban cultural gem – housed in a 1918 building originally built as a vaudeville house – for parking!

Mayor Rilling said that the city would work with board members of the Wall Street Association on their proposal to develop an arts and cultural center in the area – using the Garden Cinemas or in the new building.

“There are at least 4 options,” he noted.

In my public statement, I pointed out a fifth: Simply buying the existing parking lot 100 feet away at 27 Isaacs Street, instead of tearing down the Garden at 13 Isaacs Street.

The lot’s owner, Jason Milligan of New Canaan, later said publicly he would sell it at a “reasonable” price to save the Garden. As bargaining tactic, he had once asked $10 million for it.

In my own conversations with Milligan, he seemed ready to be truly reasonable. He even publicly apologized to 3 Council members by name for his previous actions.

At the 11th hour, it seems that Norwalk is starting all over for the Garden.