One of the great, unexpected consequences of the coronavirus is that musicians around the world are performing — live, for free — on very accessible media platforms. You can’t attend a concert, but concerts can sure come to you.

One of the downsides of this great, unexpected consequence is that it’s not exactly a real concert. Musicians get none of the usual feedback from audiences, who feel equally disconnected from performers.

The premise is simple. A website connects young, classically trained musicians — graduates of Juilliard, New England Conservatory, Yale and other top schools — with anyone, anyone who wants to hear beautiful music. In a personal, one-on-one concert.

After filling out a brief form — answering preferred time and “strings,” “piano,” “wind/brass” or “surprise me!” — users are paired with an artist. The musician performs for 15 minutes via Zoom; the audience of one watches. There’s eye contact, energy — and the option, on signing up, for conversation too.

Hidden Fabric (the name comes from a Virgina Wolff quote) is the brainchild of Sam Weiser. At Staples High School he played violin — superbly — in every group, and every chance he got. He earned a dual degree from the New England Conservatory of Music and Tufts University. (The latter is in computer science. “I might use it one day,” Sam says.)

After grad school at the San Francisco Conservatory, he joined the Del Sol String Quartet. He has lived in the Bay Area ever since. (They performed in Westport last October.)

When the pandemic hit, Sam — and musicians around the world — suddenly lost all their gigs. Many pivoted quickly to livestreaming. 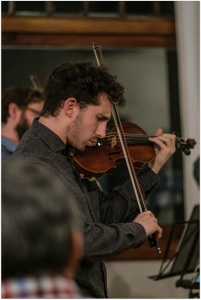 “There was an outpouring of creativity, even in the classical music world,” he says. “But as good a replacement as that is, the symbiotic relationship between the performer and listener gets lost. You’re playing to a camera. You don’t know who is on the other end, or how many people are there.

“For the audience, it feels sort of real. But there’s no sense that you’re sharing the music with the performer.”

He and his friends had an idea: short personal performances and conversations.. They recruited musicians from across North America. Their ability to connect personally was as important as their musical expression.

“The pandemic highlighted needs in our community — the need to create, but even more than that, the need to be heard,” the website says.

“HFMP is our way to engage with audiences, old and new, and to reaffirm our belief that to be human is to be connected.”

The idea has taken off. But even Sam was surprised by its power.

“It’s incredible how much doing 1-on-1 concerts changes my day,” he says.

“I’ve never been an extrovert. But it’s so touching to meet someone, and share something so personal. It’s just 15 minutes, but it feels really special.”

There is no charge, though the website encourages tips. Sam says a set fee would “undermine the idea of giving our time to people who are struggling far more than we are.”

Across the country, restrictions are being lifted. Americans are going back to work and play. Concerts — with shared spaces, and musicians blowing into instruments — will be one of the last forms of entertainment to come back.

Until then, the Hidden Fabric Music Project plays on.

One response to “Personal Zoom Concerts: A Classic COVID Response”