Changes Ahead For Commuter Lot?

A new bridge over the Saugatuck River, and a new look for Railroad Place, are not the only changes being considered for the area near the train station. 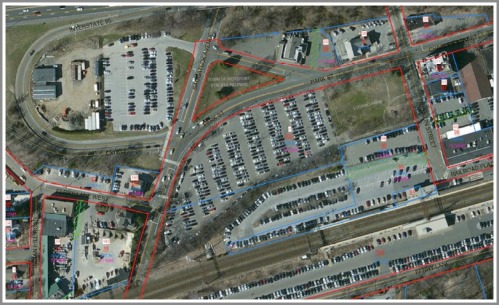 An aerial view of train station parking lot 1 (center). Luciano Park is the green area on its right. The state-owned lot near Exit 17 is on the left.

The lot is owned jointly by the town of Westport, and state of Connecticut. It’s in poor condition, needing repaving, re-striping and flood mitigation. The redesign addresses those issue — and provides improved lighting, more electric car charging stations, a new pedestrian staircase, partial sidewalks, new crosswalks in the lot, and plenty of trees.

However, because the lot’s 5 exits do not conform to current state and town regulations, they would be reconfigured — and reduced to just 1. All cars entering and exiting the lot would use a single point, next to Luciano Park. Police chief Foti Koskinas estimates that could increase exiting time by 6 minutes. (There would be 2 emergency exits as well.)

It’s estimated that the reconfiguration would reduce the lot’s capacity from 320 to 310.

Earlier this week, the RTM Transit Committee voted on the proposal. They deadlocked, 3-3.

27 responses to “Changes Ahead For Commuter Lot?”