The fact that the old Westport Library building — opposite what will soon be the former Klaff’s — now houses a Starbucks is seen by some longtime Westporters as a symbol of how the town changes.

The address is both 1 Main Street, and 19 Post Road East. There will be entrances on the Post Road, and Parker Harding Plaza.

The franchisee — who owns the rights to all of Fairfield and Westchester Counties, though this is his 1st location — has a name as odd as Freshii.

Jon Blob (when his German grandfather arrived at Ellis Island, “Bloh” somehow changed) has a background in restaurants — via the financial world. He’s invested and analyzed plenty of them, and is very excited about this one.

“I spent almost 2 years thinking about career paths other than New York finance,” Blob says. “I have a good handle on restaurants.” He heard about Freshii, did due diligence with the CEO, and loves “where the brand is going, and what it stands for.” 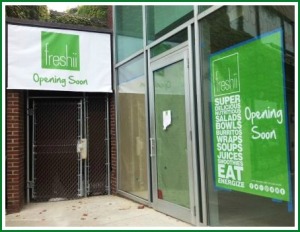 Still a bit of work to do, to freshen up Freshii’s entrance.

Founded in Toronto, and now in 70 or so locations internationally, Freshii is part of a growing market niche. It offers healthy, quick meals — sit-down or takeout — that’s in between fast food and an upscale restaurant.

Blob says the demographics of Westport are perfect for Freshii: “a health-conscious, fit, active customer base, with disposable income.”

Freshii will seat 25 inside, and 25 more outdoors on a Post Road patio.

And — this being Westport (and the former library) — there’s free WiFi too.

16 responses to “Freshii Finds A Foothold”