Lou Nistico is fondly remembered as part of the family that owned the Arrow — the beloved Italian restaurant in Saugatuck (it’s now Mystic Market).

In the mid-1970s though, he was also the concessionaire at Longshore. His daughter Joanne was the bartender.

At the time, Westport was the illustrators’ capital of the world. They worked at home, but socialized often.

A group of cartoonists often played golf, then headed inside for martinis. Joanne calls them a “fun and wild group of talented men.”

One day during lunch, they dashed off this collage for Lou: 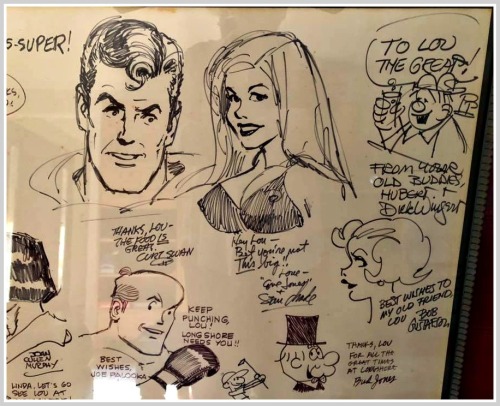 Dick Wingert’s “Hubert” looks half in the bag, as he raises a glass to “Lou the Great!”

Then look at Curt Swan’s Superman next to Grace — and his wandering eyes.

They make a nice couple. Their cartoon kids would have been gorgeous.

Westport’s Cartoon History: What A Laugh

Westport’s heritage as an artists’ colony is no laughing matter.

Except when it is.

In addition to attracting some of the most famous portrait artists and commercial illustrators in the country, Westport was a haven for cartoonists.

“Popeye,” “Little Orphan Annie,” “Superman” — they and many of America’s most famous comic strips and books were drawn right here. 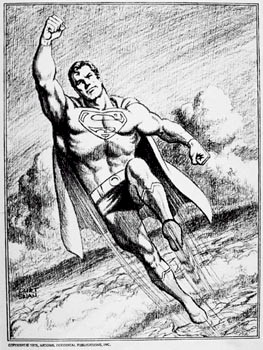 Westporter Curt Swan drew the “Superman” comics for many years. This illustration is part of the Westport Schools Permanent Art Collection.

The mid-20th century was America’s  golden age of cartooning. Now it’s memorialized in a show at the Bruce Museum in Greenwich. “Masterpieces from the Museum of Cartoon Art” — the current exhibition — features more than 100 original works, including strips, newspaper panels, comic books and animation.

There’s an early editorial cartoon by Thomas Nast, a New Yorker gag by Peter Arno, and classic “Peanuts” and “Doonesbury” drawings. Special programs include a panel tribute to “The Golden Age of Cartooning in Connecticut” (Thursday, March 7).

Wherever you turn in the Bruce Museum show, it’s hard to escape Westport.

Curator Brian Walker — former director of the Museum of Cartoon Art, and son of Mort Walker (“Beetle Bailey”) — grew up in Greenwich. But he knows Westport well.

His father was part of a large group of cartoonist friends. Many lived here. This is where their professional meetings (and parties) took place.

Westport was close enough to New York City to go in when they had to. But Connecticut had no state income tax.

Cartoonists work alone, in their studios. But they liked having like-minded professionals nearby.

Bud Sagendorf, and his most well-known character.

Max’s Art Supplies on the Post Road welcomed cartoonists. They’d buy pens, pencils and paper — and hang around to talk.

The coffee shop and Mario’s — both directly across from the railroad station — drew them in too. They’d work right up to deadline, head to Saugatuck, hand their work to a courier to be delivered to a New York editor, then sit around and tell stories.

The Connecticut chapter of the National Cartoonists Society — the largest chapter in the country — met for years at Cobb’s Mill Inn and the Red Barn.

In the heyday of Westport’s cartoon era, they had a bowling league. An annual golf tournament too.

Over the years, the world of cartooning changed. Today, it’s all about “animation.”

That’s no joke. But for several decades — not that long ago — Westport was where much of America’s laughter began.