Tag Archives: Westport board of selectmen

Yesterday morning, the Board of Selectman approved several changes recommended by Parks and Recreation. Fee increases will pay for $200,000 worth of maintenance, supervision and a full-time police officer. The new charges — and increased personnel — may ease some of the overcrowding and complaints that arose last summer.

Weston residents — who occupy a middle ground between Westporters and non-residents — will now pay $375 (up from $25o). Weston seniors’ stickers are now $200, a $65 increase.

Daily parking increases too: It’s up from $40 to $50 weekdays, and from $50 to $65 on weekends. Only 100 daily passes will be sold this summer — and purchasers will have a special parking area.

In addition, this year 350 beach stickers will be sold to non-residents. Last year’s cap was 600.

Fee changes may ease some of the crowding at Compo Beach.

Tagged Westport board of selectmen, Westport Parks and Recreation

This morning she announced that Rob Simmelkjaer will join her, in the 2nd selectman slot.

A member of the Zoning Board of Appeals and the Democratic Town Committee, Simmelkjaer jumped into local politics soon after moving here in 2013.

His face may have been known to Westporters even before he arrived. He’s been an on-air contributor for NBC Sports, where he is also vice president of NBC Sports Ventures. He previously worked at ESPN and ABC News, where as anchor and correspondent he covered such events as the Virginia Tech shootings and President Ford’s funeral.

At Dartmouth College, Simmelkjaer majored in government and philosophy. He also holds a law degree from Harvard University.

He is a volunteer coach with the Westport Soccer Assocation, and a vice moderator at Norfield Congregational Church. He and his wife Kathryn — a physician at Bridgeport Hospital — are the parents of 2 young daughters.

When NBC Sports moved from 30 Rock to Stamford, the Simmelkjaers looked to move out of Manhattan. They had friends here. The town’s friendly vibe, opportunities for children and excellent schools made it a no-brainer.

“This is the place I wish I grew up in,” says Simmelkjaer, a New Jersey native.

Always politically engaged, he volunteered with the Barack Obama campaigns in 2008 and ’12, and Hillary Clinton last year.

When Kane asked him to be her running mate, he was quick to say yes. “She’s a terrific leader, is passionate about the town, and knows we have to invest in our assets,” he says.

He is eager to face the budget issues “coming down from Hartford.”

Rob Simmelkjaer with his wife Kathryn, and daughters Julia and Annika.

He also is running because, he says, “with the big picture in today’s country, more people need to stand up and answer the call to serve.”

Believing in the adage “all politics is local,” Simmelkjaer says, “if we want to solve problems at the state and national level, we need to show we can do it here, in a civil way.”

If elected, he hopes to leverage his day job — working with entrepreneurs and tech people — to focus on “better uses of technology as a town, and with partners, to solve problems like traffic, parking and communications.”

Simmelkjaer also says that — though they’re not the Board of Education or Finance — the 3 selectmen have a role to play in “maintaining our top-quality schools. Whether you have kids or not, that’s important for us all.”

A Good Time For Charlie

Charlie Haberstroh is one of the genuinely good people in Westport.  The 60-year-old, 2-decade Westporter — a 2-term Board of Finance member, former RTMer, longtime Rotary leader and sports volunteer — is the Republican Town Committee nominating committee’s choice to fill a vacancy on the board of selectmen.  If approved by the full RTC, and then the 2 Democratic selectmen, Charlie would replace Gavin Anderson, who resigned for health reasons.

Charlie was not looking to leave the finance board — especially not during budget season. But 7 years is a long time.  I can’t begin to fathom what all those loooong meetings — filled with mind-numbing numbers and interminable speeches by passionate yet repetitious town officials and common citizens — does to the human brain.

Board of selectmen meetings may be quicker and less contentious, but they are just as important as Board of Finance gabfests.

“I’ve run my own asset management firm for 10-plus years, and was a manager for most of the 30 years I worked for other finance firms prior to founding my own,” Charlie told “06880.”

“The Town of Westport has many challenges over the next few years, including increasing pension and medical obligations, as well as anemic economic revenue growth at best.

“I can help try to rationalize expenditures, and look to try to make government work more efficiently.  I know the Westport school system well, and may be able to help integrate like functions.”

Charlie knows there is no magic wand.  The key is “hard work to try to do more with less.”  The other option:  “Westport runs the risk of turning into the other very high-taxed New York metropolitan suburbs.”

Selectmen are frequently caricatured (okay, by me) as dealing solely with stop signs.  Most Westporters know the selectmen only as proclamation-proclaimers.  Though the duties of the 2nd and 3rd selectmen (the former runs for office on a ticket with the 1st selectman; the latter is the loser with the most votes) are to advise the 1st selectman on all aspects of town government, and approve town contracts, the value of the 3rd selectman depends on the willingness of the 1st selectman to use his or her expertise.  The 3rd selectman’s status as the lone representative of the other party ensures that chances for dramatic votes are slim.

“I have every confidence that the (current) 1st selectman has the intellect and confidence” to use the 3rd selectman’s skills and expertiese effectively, Charlie says diplomatically.

So what about running for 1st selectman himself, in 2013?

“I have no political ambitions,” Charlie says.  “I run my own firm, and do not believe that will change in 3 years.  I can only do the best job I can for the town as 3rd selectman.

“Westport has been very good to my family during the 20-plus years we’ve lived here.  During that time my wife (Westport Department of Human Services coordinator Patty) and I have tried to give back to the community in any way we can.

“My goal has been to leave whatever organization I am involved in in better shape than when I began with it.  If I can do that in the 3rd selectman position, I will be very satisfied.”

Gavin Anderson leaves some big shoes to fill.  Charlie Haberstroh is one man who can step right into them.

Fortunately, the Westport board of selectmen is not the United States Congress.  Gordon Joseloff is not Harry Reid; Shelly Kassen is not Nancy Pelosi.

And — though he loves to golf — Charlie Haberstroh is most definitely not John Boehner.

“06880” looks forward to Charlie’s quick approval next Tuesday by the Republican Town Committee, and soon thereafter by Gordon and Shelly.

Don’t Cross At The Green

For decades, pedestrians have reached Main Street from the Post Road by crossing to the YMCA from — first — Colgan’s and Thompson’s Pharmacy; then Ships, and now Tiffany.

The crosswalk was  recently erased — poorly, but officially. 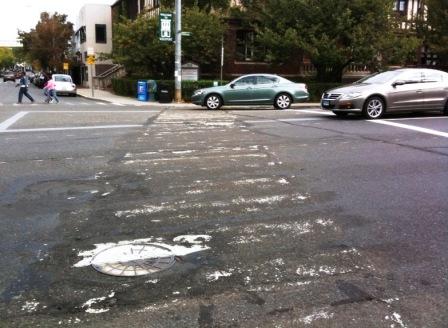 The Board of Selectmen believed that intersection was dangerous — the Post Road is wide there, 2 lanes of traffic diverge, and well, why not?

The lone (legal) way to cross now is a few yards away, from the west corner of Taylor Place to what was once the library.

Any bets on how long it will take Westporters to stop crossing the Post Road by the Y?

Manolo Is Not A Takeout Restaurant

Westport’s selectmen have plenty to do.  In addition to setting budgets, ensuring public safety and deciding where dogs can poop, our top 3 elected officials act as the town’s Traffic Authority.

This doesn’t need an emergency meeting — the sign’s been around since the Herb Baldwin days, probably — but at some point our selectmen might reconsider 15-minute parking on Church Lane.

I’m sure Cafe Manolo is not pleased that diners worry about tickets even before the menus arrive.

Across the street at the YMCA it takes 15 minutes just to climb the stairs to the locker room, change, then make your way back down to the pool.

The parking restriction might have worked when Manolo was a bank vault, and the Y was a firehouse.

But the streets of Westport are no longer filled with Packards, flivvers and horses.