Posted on November 9, 2016 | Comments Off on Legendary Painting Restored; Prints On Sale Now

In the fall of 1946, Westport artist Stevan Dohanos invited 5 students from the 40-member Staples High School band — led by John Ohanian — to be models. Dohanos was creating a Saturday Evening Post cover, and needed musicians.

The quintet — Ed Capasse, Bob Nash, Evelyn Bennett, Steve Sefsik and Robert Barker — came to his studio. He paid them $30 each — over $400 today — to sit still for 30 minutes, as if playing their brass instruments. The cover ran on October 19, 1946. 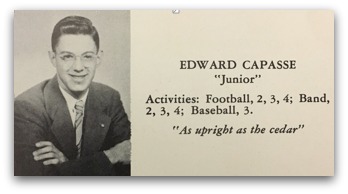 Ed Capasse was in the upper left of Stevan Dohanos’ painting. He went on to become a noted Westport lawyer. Here’s his yearbook photo and writeup. 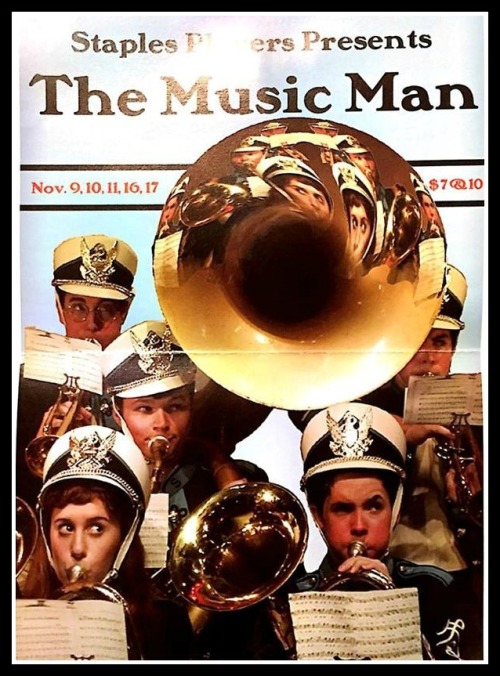 This year, “The Music Man” returns. So does the poster. This time Julien Zeman, Tucker Ewing, Maggie Foley, Nick Rossi and Colin McKechnie sat for a photo. (You can see Jacob Leaf — who plays Harold Hill — in the sousaphone reflection.)

Now – in honor of the upcoming performances of “The Music Man” — Dohanos’ painting is back in a position of honor.

In 1946, the artist donated the original to the Westport schools. For decades it hung in the Staples band room. Later it could be seen in the principal’s office, then outside the first selectman’s office in Town Hall.

Now a treasured masterpiece of the Westport Public Art Collections Committee, in 2014 the organization raised funds to have the painting conserved and returned to full brilliance. 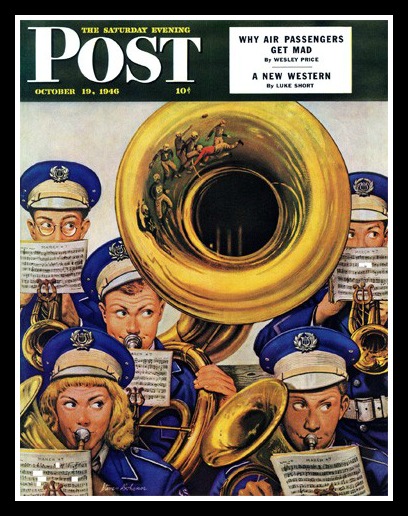 Yesterday, it was unveiled and hung in its new position of honor: the Staples auditorium lobby. On hand were Players co-directors Roth and Kerry Long; First Selectman Marpe (whose daughter posed for the 2001 poster), and principal James D’Amico.

“Music Man” audiences this weekend and next will enjoy the restored painting (along with the other posters). So will theatergoers for years to come.

“The Music Man” posters in the Staples lobby.

But now anyone can enjoy the painting in their own home. Recently, Art Collections Committee members found a trove of prints that Ann Sheffer made for a fundraiser in the late 1980s.

Sales take place at “Music Man” performances this weekend and next, as well as online. Just click here to own a piece of Westport (and musical) history.

Comments Off on Legendary Painting Restored; Prints On Sale Now

Posted on November 4, 2016 | Comments Off on “Music Man” Tootles Into Town

Everyone wants “The Music Man.”

This fall — with our nation so divided — Staples Players co-directors David Roth and Kerry Long are staging what Roth calls “the classic American musical.”

The show — which debuted on Broadway in 1957 — “hearkens back to a simpler time. At its heart, this is really about community.”

River City is a town filled with discord, riven by dysfunctional relationships. The school board, for example, bickers about everything — even whose watch is right.

Through music, the town becomes whole. “Professor” Harold Hill turns the school board into a barbershop quartet. When they’re together, they produce beautiful harmonies. 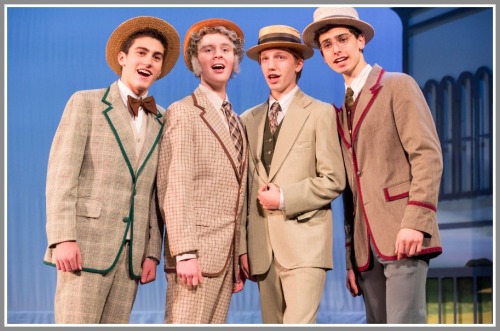 Music changes everyone in town — including Harold himself.

“Like many people in theater, Kerry and I believe this is the perfect musical,” Roth says. “It’s a fantastic blend of story, comedy, music, dance, drama and romance. It doesn’t get any better than that.”

Then, as now, fear and dread filled the country. Fifteen years ago, “The Music Man” lifted Westport’s spirits. Roth calls the musical “a love letter to Americana,” and hopes it does the same now.

When the show opens next Friday (November 11) — and runs through the following weekend — audiences will see what may be Roth and Long’s largest and most stunning set ever. Former Player Reid Thompson — who earned an MFA in set design from the Yale School of Drama — has created a stage that conveys an enormous sense of community.

“The town is present in every scene,” Roth says. “It’s a sprawling Iowa landscape.”

There are other differences between this production, and the post-9/11 one. New choreographers Christopher Myers and Rachel MacIsaac have put their own stamp on the dance routines.

In keeping with the sweeping show, the cast is huge. Jacob Leaf — who thrilled audiences as Tevye in “Fiddler on the Roof” — is Harold Hill. Zoe Mezoff  enjoys her 1st big lead, as Marian the Librarian. They’re joined by 62 other Stapleites, and 8 more from elementary and middle school. 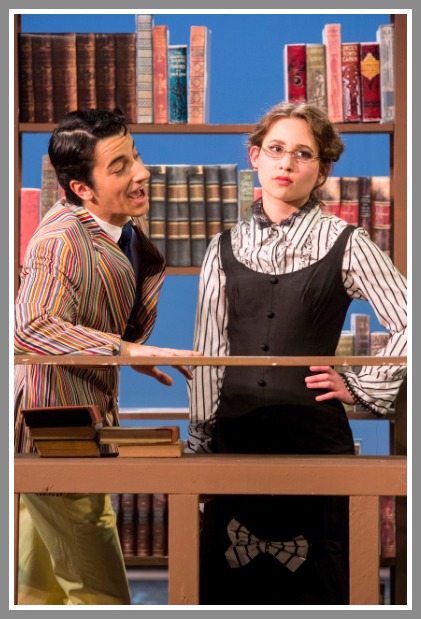 “The Music Man” is a celebration of community. It’s set in River City. But all of us here will feel the communal spirit too.

Published in 1946, it shows 5 band members all looking away, in mid-toot. The models were all Staples students.

Dohanos’ work had nothing to do with “The Music Man.” But Roth and Long have used it as the poster for the show.

That’s the kind of thing that brings a town together, and fills it with pride.

Harold Hill: Eat your heart out!

Comments Off on “Music Man” Tootles Into Town

Arts Lovers: You May Not Want Wells Fargo As Your Bank

One headline read: “A ballerina yesterday. An engineer today.”

Another: “An actor yesterday. A botanist today.”

The idea — that to become successful one should jettison the arts, and focus on something much more STEM-related — was not cute. It was idiotic.

Almost as quickly, Wells Fargo apologized. The company said they were “deeply committed to the arts,” admitting that ads intended to “celebrate all the aspirations of young people…fell short of that goal.”

No word on whether the Post Road branch plans to make a nice contribution to the Westport Arts Center.