Why Is Westport So White? The Discussion Begins.

The title was provocative: “Why is Westport So White? What Can You Do About It?”

The speakers were heartfelt. Their list of examples was long, at a meeting last night that covered topics like long-ago real estate practices, current zoning regulations, and the roles of schools and police.

The event — organized by a group of residents ranging from long-timers to newcomers, as well as TEAM Westport — drew a crowd of about 75 (outdoors and socially distanced) to MoCA Westport. Another 25 or so joined via Zoom.

Black residents spoke of their experiences as a very small minority, in a very white town. In one compelling example, Ifeseyi Gale was confronted by a suspicious family when she pulled into a driveway to pick up an item. 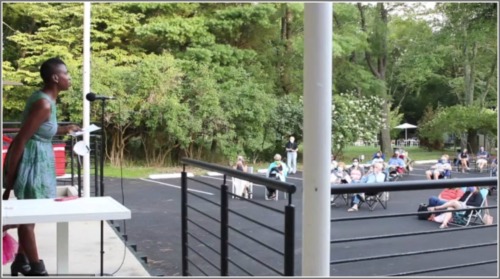 Many speakers described their love for the town. For example, TEAM Westport chair Harold Bailey noted Police Chief Foti Koskinas’ grace and calm, and applauded new Superintendent of Schools Tom Scarice’s openness to hearing about what can be done differently and better, in terms of diversity and inclusion.

But they did not shy away from demanding that the town do a better job in race relations.

A white student described a survey, in which recent Staples grads were asked about their preparation for living in a diverse society. Many noted that they had been led to believe the world is color-blind — but it is not.

TEAM Westport sponsors an annual high school essay contest. Past prompts have included micro-aggressions, and taking a knee protests. TEAM Westport has spent has spent nearly 2 years working with the school system on a framework including training, hiring, curriculum and staffing that would address diversity and inclusion. Winners of the 2019 TEAM Westport essay contest are (from left) chair Harold Bailey, and Chet Ellis, Angela Ji, Daniel Boccardo and Olivia Sarno.

Planning and Zoning Commission chair Danielle Dobin discussed how the lack of diverse housing impacts who lives here. She urged elimination of Westport’s cap on multifamily housing — which limits the total number of those units to 10% of total town dwellings, many of which are age-restricted and do not allow families — along with removing a restriction on “accessory dwelling units” with full bathrooms and kitchens. Permitting property owners to rent guest cottages, or create separate private living space, would expand housing stock and increase affordability and diversity.

Over the past few months, the entire country has talked openly about race. Organizers expressed hope that last night’s event will be an important beginning — not a one-time event — for their town.