That’s the theme of a few of this week’s art gallery submissions. As we enjoy this end-of-a-strange-summer holiday, we also celebrate the wonders of Westport.

As always, all submissions are welcome — in any medium. The only rule: It should be inspired by, relevant to, or somehow, in some way, connected to our current world. Student art of all ages is especially welcome.

Coronavirus, social justice, politics, or just the beauty around us — have at it! Email dwoog@optonline.net, to share your work with the world. 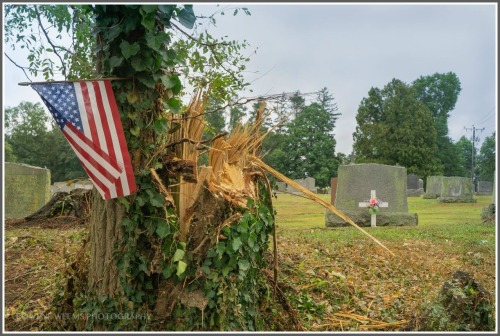 “Current Issues.” Photographer Rowene Weems — who took this shot at Assumption Cemetery on Kings Highway North — says, “Initially I was fascinated by the broken edges of the tree (there are so many these days. Lightning? Wind? Crazy!). Then, by the flag in the tree. Was the flag there first or after? Then I began to see it all more symbolically. There’s a lot going on in our world right now that feels pretty shattering.” 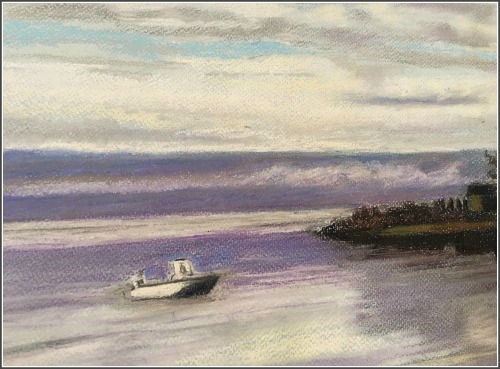 “Cottage in the Woods” (Lawrence Weisman)

Whatever the reason, the 0*6*Art*Art*0 gallery walls are getting bare.

Here are the latest submissions. Feel free to add yours — in any medium. The only rule: it should be inspired by, relevant to, or somehow, in some way, connected to our current world.

Coronavirus … storm … politics — have at it! Email dwoog@optonline.net, to share your work with the world.

“Variety is the Spice of Life!” (Wendy Levy)

Those were the days!

Well, yeah. In many ways they were — especially around here. We had a real-live Main Street, with actual grocery stores, hardware stores, and merchants who knew your name. Kids romped in the woods free from parental worries.

And Westport was growing rapidly. Every day, it seemed, another family moved in. Many were arts-types: novelists, TV writers, playwrights, admen. They were drawn by the town’s reputations as an “artists’ colony” — and as each one arrived, more followed.

Starting this Sunday (January 29), you can revisit those days. The Westport Historical Society presents 2 exhibits looking back on that golden/scary era.

“Next Stop: Westport, The Inspiration for 1950’s TV & Film Writers” takes its title from “A Stop at Willoughby,” one of “Twilight Zone”‘s most memorable episodes. In it, an ad executive on his way home to suburban Westport repeatedly finds himself in a pastoral town called Willoughby — in 1888.

Westport’s role in “The Twilight Zone” was no coincidence. Rod Serling wrote the episode when he lived in Westport.

Fellow residents included novelist Max Shulman, whose Rally ‘Round the Flag, Boys! satirized life in a suburban town when the Army selects it for a missile base. (Which actually happened here; the subsequent film led Paul Newman and Joanne Woodward to move to Westport.)

It was quite a time. There were so many creative types, says Linda Gramatky Smith — the daughter of “Little Toot” creator Hardie Gramatky — that there were regular writer-vs.-artist basketball and softball games.

The Historical Society exhibit features all that, and more — like Sloan Wilson’s novel The Man in the Gray Flannel Suit, which was set here (the subsequent movie, starring Gregory Peck, was filmed here), and the final year of “I Love Lucy,” when the Ricardos and Mertzes move to town.

Video of a different kind will be shown at the WHS too. “The Cold War in Our Backyard” — a fascinating, chilling (and at times laughable) film compilation by Lisa Seidenberg, including everything from instructions on removing radiation from food to the still-frightening “Twilight Zone” episode on barbarism in a fallout shelter — will play in a continuous loop. (You can also click here to see it.)

Nearby, images and artifacts will recreate the fears that filled that “golden” era.

He didn’t live in Westport.

But so many other famous writers did. Starting Sunday, the Westport Historical Society shares their stories with the world.

Who knew so many people cared about the Merritt Parkway?

An overflow crowd braved last night’s cold rain to pack the Westport Public Library for a film about a road.  Lisa Seidenberg showed her 35-minute documentary, “The Road Taken: The Merritt Parkway,” to an appreciative audience — only some of whom remember it being built in the 1930s.

I’ve driven the Merritt thousands of times.  But I learned plenty about it last night — and was reminded of more I once knew, but forgot as quickly as the memory of tollbooths in Greenwich.  For example: 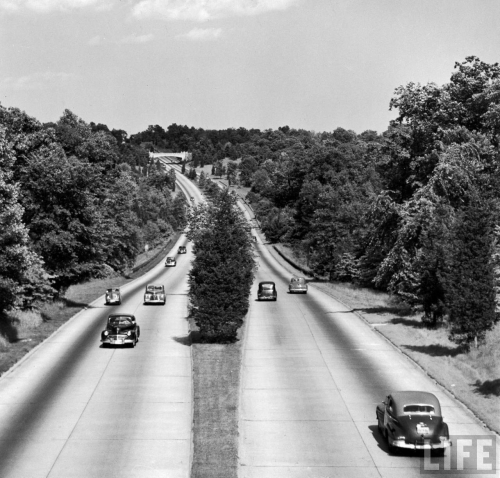 The film’s 2 best lines:  “The Merritt Parkway is outdated — in the best possible way.”

And:  “Many postcards featured the Merritt.  None showed I-95.”