“It’s an incredible town resource,” he says. “For just the price of a handpass, you can swim in a well-kept pool surrounded by the Long Island Sound. It’s great.”

But Peter is intrepid. At 5 p.m., he headed to Longshore to swim.

No one was there — no one, that is, except a man named Jay. He’d covered his computer — used to check those handpasses — with a trash bag.

He cheerfully told Peter that the pool was open according to the published schedule — rain or shine. It’s closed only during thunderstorms, and for 30 minutes afterward.

“He was happy to let me in,” Peter says. “And the lifeguards were happy to come out to ensure I was safe.

“They’re a great team. Service was cheerful and professional, as always. Whether it’s a crowded weekend in the sun or a deserted weekday in the rain, we are very lucky to have them.”

Thank you, Jay and everyone else at the Longshore pool. You are our Unsung Heroes of the Week! 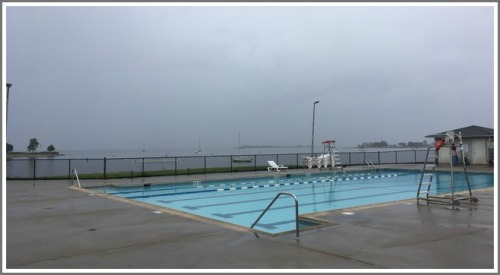 Rain or shine, the Longshore pool is a town gem. (Photos/Peter Boyd)

Like Loading...
This entry was posted in Longshore, Unsung Heroes and tagged Longshore pool. Bookmark the permalink.