In the wake of a Superior Court judge’s ruling that Westport grant conditional approval for a sewer line extension — the first step toward construction of a large housing complex on Hiawatha Lane, off Saugatuck Avenue next to I-95 Exit 17 — the developer in the lawsuit has issued a press release.

A 14-year effor to create a moderate-income housing community in the Town of Westport took a major step forward after a State Superior Court judge ordered the town to grant a conditional approval for a sewer line extension to serve proposed new development on Hiawatha Lane in the Saugatuck neighborhood.

In a ruling issued May 7, Judge Kenneth Shluger ordered the town to extend an existing municipal sewer line 1600 feet to serve the proposed development. The judge said the town’s Water Pollution Control Authority has abused its discretion by delaying the extension. The town’s 3-member governing Board of Selectmen serves as the commissioners of the Authority.

The town has maintained that it could not consider extending the sewer because a failing sewer line and related pumping station that would serve the site are inadequate to handle the additional sewage effluent the new housing would generate, and further said that an existing town policy precluded it from issuing conditional approvals.

The developer, Summit Saugatuck LLC of Southport has maintained since early 2016, when it negotiated a joint venture agreement with the Westport Housing Authority to build 155 units, that the town was not only authorized but obligated to issue a sewer extension approval conditioned upon the completion of the sewer and pump station upgrades.

In 2016, the Public Works Department set the schedule for the upgrades, which are now nearing completion. Summit’s property met all the criteria for receiving sewer service, including being within the Sewer District, and that the town’s sewage treatment plant having ample capacity.

Summit’s attorney, Timothy Hollister, said the judge’s decision supports Summit’s position that the town’s interests are fully protected by granting the extension conditioned on the upgrade being completed, and that the town produced no evidence that it has a long-standing policy against issuing conditional approvals. “There is no such policy,” he said.

Felix Charney, president of Summit Development, said: “The judge found that the town has been using the sewer system upgrade as a way of delaying creation of the moderate-income housing that is so desperately needed in Westport. In 2016, the town encouraged us to partner with the Westport Housing Authority and we came up with a great plan for 155 units including 70 moderate-income units. But when we presented the very plan the town had encouraged, the Town Board dropped its support and hid behind the sewer line issue as the way of blocking the development. Now, with the Housing Authority having lost its financing opportunity, we are proceeding on our own.” 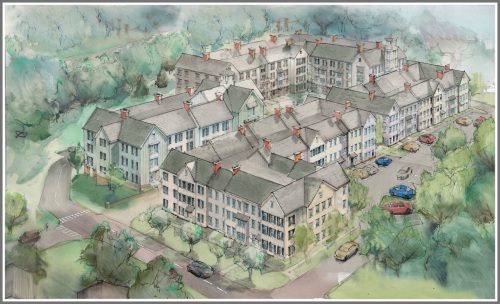 Summit’s revised plan will feature 187 studio, 1- and 2-bedroom apartments with 30 percent for moderate income households having maximum rent and household income restrictions for 40 years. The 8-acre site is centrally located with access to local stores, restaurants and services.  The community will be a transit oriented development (TOD), as it is within easy walking distance of the Saugatuck train station.

Westport First Selectman Jim Marpe has been quoted saying that the court decision will have “very little practical impact on the proposed project’s timetable.”

Charney responds: “For years we have offered compromises, all of which have been rebuffed by the town. We have a great location near the train station, are in a neighborhood where there are other multi-family apartments and are using a classic New England-style architecture that fits beautifully within the community. The real question boils down to whether Westport wants to be an inclusive or an exclusive community?”

He said Summit had offered the town a series of smaller proposals including the one in partnership with the Westport Housing Authority, but the town chose to not commit.“They left us no alternative but to turn to the courts.”

Carol Martin, executive director of the Westport Housing Authority, said the authority supports the private sector developing housing in the town. “We have reached the point where we are no longer accepting additional applicants signing up with us. With approximately 1,000 names already on the list, there’s no point. We applaud private sector developers like Summit who are willing to step in and help to address the huge need we have in Westport.”

38 responses to “[OPINION] Developer: In Wake Of Hiawatha Court Decision, We Plan 187 Units”