All 3 proposals — and many others — were legally noticed by Westport’s Planning and Zoning Commission.

But not many Westporters read the teeny-tiny, buried-in-the-back legals in newspapers like the Norwalk Hour.

Or open the letters that get sent to the nearest neighbors. 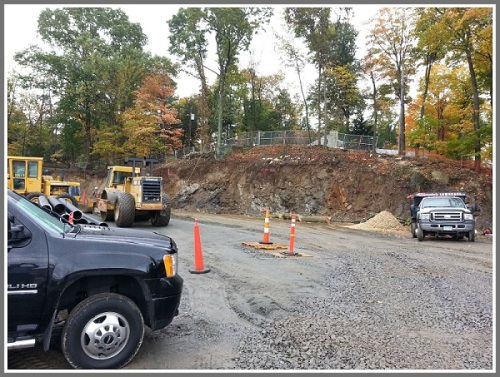 Some neighbors were surprised by excavation work done in 2014 behind Compo Acres Shopping Center.

The P&Z knows this is an issue. They’re exploring additional ways to spread the word about upcoming applications.

The Coalition for Westport hopes to push them along.

The ad hoc, town development-focused group has filed a proposed text amendment with the P&Z. It would require posting a physical sign on any property subject to upcoming debate. It would be similar to the signs erected by restaurant owners when they request a liquor permit.

The P&Z will discuss the Coalition’s idea on February 1, at Town Hall.

You’re reading about it here because it’s not yet law. Also, because you don’t read the Hour.

Plus, there’s no property on which to put a sign about it.