In today’s technologically marvelous world, any kid with a camera and a computer can make a movie.

Local teenagers do it uncommonly well. Nick Ribolla (“Welcome to Westport“) is one viral sensation example; there are countless others.

In 1962, movie-making was considerably more difficult.

So when a group of Westport youngsters made a feature-length, color production, everyone took notice.

And by “everyone,” I mean the New York Times and Life magazine — along with plenty of movie-goers.

A New York Times story of December 7, 1962. Note that Ralph Bluemke had his own director’s chair.

“I Was a Teenage Mummy” was a spoof of classic horror films. The plot is typical: a 3,700-year-old mummy menaces (of course) Westport.

The movie was the brainchild of Ralph Bluemke. He was the “old guy” — 22. 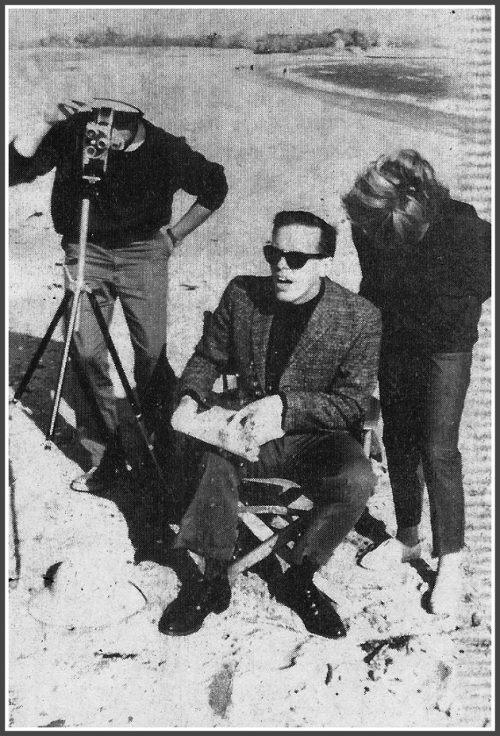 All the cameras were borrowed. “A local automobile dealer lent a Cadillac for one sequence,” Life reports, “and one mother was conned out of her new Mercedes.”

The Westport Police Department lent a cop car — and a cop.

Some scenes were shot at Longshore; “suburban  homes were pillaged for props and costumes.”

Somehow, a pilot at Idlewild Airport (now JFK) persuaded passengers to sit in their seats for half an hour after landing, while a climactic scene was filmed.

Life reports on a “Mummy Movie Made by Kids.” The captions read: “A 9-year-old villain unwraps a teenage mummy in Westport” and “Movie victims litter Connecticut beach in a simulated Sahara.”

Like any moviemaker, Bluemke faced challenges. The mummy’s makeup took 3 hours to apply each day. And “a passing train or somebody dashing by in a bathing suit could bug a whole scene,” he told Life.

“I Was a Teenage Mummy” had its world premiere at the Fine Arts Theatre (now Restoration Hardware) on April 26, 1963. The next night, there were 2 screenings at in the Staples High School auditorium.

Publicity for the world premiere of “I Was a Teenage Mummy.” The tagline read: “It may not scare you to death. But you’ll die laughing.”

Though “obviously an amateur production,” a website notes, “the details are spot on. Lots of little touches and accurate costume details that make it an impressive achievement for a group of youngsters, or adults for that matter. It doesn’t take itself too seriously.”

More than half a century after its release, “Teenage Mummy” lives on. You can buy a DVD for $10.

Ralph Bluemke — the young director — thought of everything, cinematically speaking.

But he never imagined that 50 years later, anyone with a TV could watch his film about a 3,700-year-old mummy terrorizing his — now our — suburban town.

Like Loading...
This entry was posted in Entertainment, Friday Flashback, People and tagged "I Was a Teenage Mummy", Jeff Mullin, Ralph Bluemke. Bookmark the permalink.