Sonny’s Gang Was All Here

Every high school class thinks it’s special. In fact, only mine is.

But a non-high school reunion last weekend rates an “06880” shout-out. Held at the VFW, it brought together 4 decades of former players from Sonny’s.

That was the legendary Westport-based slow-pitch softball team that roamed the East Coast — and as far as Texas — piling up league and tournament wins.

The 1986 state championship team: Sonny’s then…

The team disbanded after founder/sponsor Sonny DeMattio died in 1993. But — 20 years later — Jeb Backus, a Sonny’s mainstay, brought the gang together again.

They talked about their 5 state championship. Their 1982 World Tournament 2nd-place finish. Their 111-22 record one memorable year.

There were plenty of familiar faces at the VFW. The entire Calise family came from Arizona. The DeMattio family was represented by Joey and Mike. Former Staples players included Al Ten, Joey Bottone and Pat Smith. 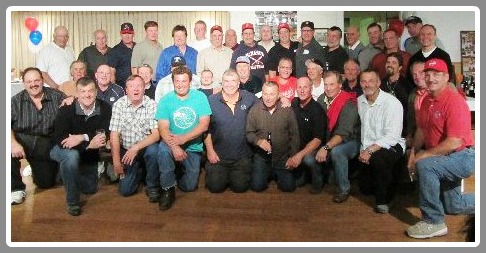 The mastermind behind it all was Backus, who started with Sonny’s as a 17-year-old.

He played with guys in their 20s and 30s. At the VFW, I’m sure he shared some amazing teenage memories from those years.

But even though this reunion story made it into “06880,” those stories won’t.

Like Loading...
This entry was posted in Looking back, People, Sports and tagged Jeb Backus, Sonny DeMattio, Sonny's softball team. Bookmark the permalink.

4 responses to “Sonny’s Gang Was All Here”