I met Lou Gagliano — chairman of the Downtown 2020 Committee — at the Parker Harding Starbucks.

Everything you need to know about Lou’s challenge — to help make downtown Westport “more vital, livable and pedestrian-friendly,” in part by recapturing the Saugatuck River and making it a center of everything that goes on on both its east and west banks — is captured in that paragraph above.

Starbucks epitomizes all that is wrong with the way we’ve allowed downtown to develop — and it has nothing to do with corporate vs. mom-and-pop.

The seats Lou and I sat in are tucked into the far corner, facing a dismal stretch of the Post Road. I stared at a store selling workout gear; Lou looked at Klaff’s.

This is what coffee drinkers could see from Starbucks — if only the seats faced the river, and the parking lot was not in the way.

Starbucks’ prime real estate should be the windows facing the river. That’s where the seating should be. Maybe the architects were bottom-of-the-class interns. Maybe they just didn’t realize the river was there, because in between the coffee shop and water sits a parking lot, plus a tiny plot of grass with one half-assed bench.

If Lou’s committee is to succeed, it will have to come overcome half a century’s worth of town attitudes. Ever since Parker Harding Plaza was built — as landfill in the 1950s — we’ve viewed the river as an impediment to development, not an asset to be cherished and valued.

The Saugatuck River cuts off stores and businesses on Post Road East from those on Post Road West, Riverside Avenue and Wilton Road. It’s forced us to create big parking lots on one side, and rue the lack of parking on the other. We haven’t given much thought to what the butt end of Main Street stores look like — the answer, I realized as I parked by Starbucks, is “really, really ugly” — because we haven’t given much thought to the river a few yards away.

The Downtown 2020 Committee — appointed by First Selectman Gordon Joseloff, whose members include business executives, planners, architects and marketers — has a difficult task.

(“2020” was chosen not only for its realistic target date, but because it stands for “excellent vision.”)

East is east, and west is west. In downtown Westport today, they seldom meet. (Photo/Wikipedia)

Working with stakeholders — Westporters, landlords, merchants, the library, Senior Center, Young Woman’s League, Westport Cinema Initiative and many others — it hopes to reposition vehicular and pedestrian traffic, while tying together retails, restaurants, housing and services, all while several important projects (the redevelopment of Church Lane and soon-to-be-former YMCA building, along with the construction of a movie theater, for example) move from theory to reality.

Downtown 2020 will address everything from the streetscape (with “sidewalks that are really unwalkable,” Lou says) to signage, garbage collection and public bathrooms. 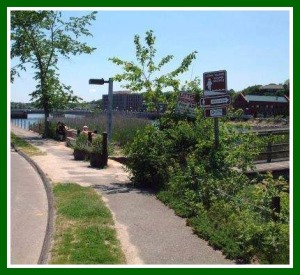 Right now, only a ribbon of greenery — and concrete — separates Parker Harding Plaza from the river.

They’ll do it without soliciting taxpayer money — Lou favors the establishment of an economic development commission — and with the understanding that the Board of Finance, Planning and Zoning Commission and RTM all will have their say too.

“We’re not reinventing the wheel,” Lou insists. He means that 2 ways: Westport has examined similar issues in the past, from previous town plans to innovative ideas suggested last spring by Coleytown Middle School 8th graders.

And it’s not like no one’s ever recaptured a river before. Both Providence, Rhode Island and San Antonio, Texas have revitalized their downtowns by taking advantage of a resource that was there, under their noses, all the time.

The timetable is tight. Lou estimates there’s a short window — 12 to 15 months — when much of the consensus must be reached. If not, he says, some of the projects already planned (like Church Lane and the cinema) will go forward on their own, without coordination into a coherent downtown whole.

“We can’t do this retroactively, or change one little corner at a time,” Lou says. “We have to look at the town’s 2 major intersections — the river and the Post Road; integrate all 4 corners, and figure out how it all fits in with the surrounding areas.”

There is nothing off the table, Lou notes — except for taxpayer money. “We won’t spend any of that,” he promises.

It’s an exciting vision. Lou has assembled a dynamic, energetic and broad-based committee to mold it, direct it and move it forward.

Hopefully, one day a few years from now — even before 2020 — that “vision” will mean a view from Starbucks that focuses less on the Post Road, and more on an ever-changing river that brings all of downtown together.

(The Downtown 2020 Committee’s next meeting is next Tuesday [March 27, 8:30 a.m., Town Hall Room 309]. The public is invited to attend. For more information on the committee, email ljgags@aol.com).

Downtown Westport has a lot to offer. The Downtown 2020 Committee hopes to tie many disparate elements together.