Culinary Camp Cooks Up A Storm

The cool camp this summer is culinary.

Just watch the 32 boys and girls — all rising 6th through 9th graders — who rush in to Staples’ 2 professional kitchens every morning.  Part of Westport Continuing Education‘s Culinary Camp, they spend 3 hours a day prepping, cooking, cleaning — and eating. 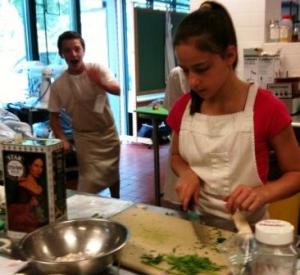 Chef Cecily Gans — renowned for her culinary curriculum at the high school — challenges the youngsters with a different cuisine each day.  The weeks are themed:  European, Asian, American regional.

Gans ties the course’s popularity to television.  “Between the Food Network, ‘Top Chef’ and the cake shows on TV, kids are really into cooking,” she says.  “The minute registration opens, we’re filled.”

The class appeals to both boys and girls.  There are several special needs youngsters, which Gans calls “great.  This is a welcoming environment.  It’s not competitive — everyone works together.”

The most popular cuisines have been New England, Southern Italian — and (surprisingly) Spanish.

Gans was also surprised to find that 2 boys — whom she figured would love beef or chicken — were interested in something else:  “Whatever involved the most cutting.”

Gans enjoys hearing nice “feed”back from parents.  She’s also delighted when campers who age out ask to return as counselors.

Culinary Camp 2010 ends on Friday.  Registration for 2011 opens next April. 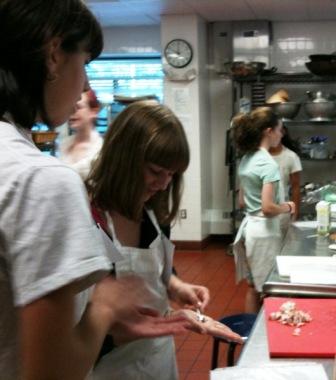 3 responses to “Culinary Camp Cooks Up A Storm”