Posted on April 24, 2009 | Comments Off on Drunken Destruction 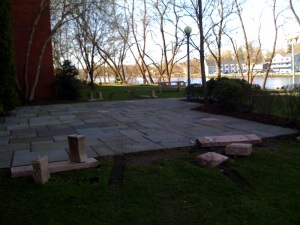 In a feat of drunken driving that defies belief, a local landmark was demolished last night.

A 23-year-old Monroe driver went the wrong way down Main Street; struck a parked car; continued through the Taylor Place parking lot; bounced off the steel book drop at the Westport library’s lower level, then tore through the Riverwalk on the banks of the Saugatuck River.

The driver weaved along the tiles and grass, plowing through a dozen or so heavy stone benches that bore the names of Westport donors. 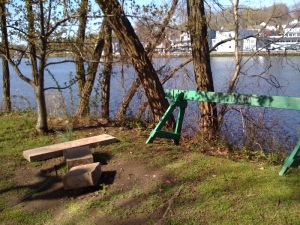 Somehow he kept going, despite mangling bench after bench.  The driver plowed along the unlit strip of park, which grew narrower with each bit of carnage.  Benches flew; the driver kept going, Levitt Pavilion-bound.

Finally — near the end of the Riverwalk — the driver crested the bank, and plunged toward the river.   Ironically, he was saved from possible death by one of those same benches, which caught underneath the car and stopped its descent. 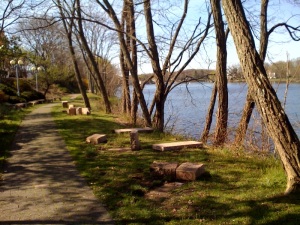 The driver was charged with DUI.  Early this morning, the clean-up began.

Parks and Recreation workers assessed the damage.  A&B Family Memorials in Norwalk — which provided the original benches — is ready to repair or replace them.

Betty Lou Cummings — the mastermind behind the Riverwalk, whose 57 benches, thousands of commemorative bricks and beautiful landscaping has provided a tranquil spot for strolling, sitting and smooching for 2 decades — was heartsick this morning.  She’s a dynamo with countless community projects to her credit, but the Riverwalk is her most visible — and perhaps her favorite.

Betty Lou is ready to help rebuild.  And she has no sympathy for the drunken driver.

Comments Off on Drunken Destruction