From Cottage To Firehouse

When it was the Vigilant Hose Company, the firehouse next to National Hall was where firefighters worked, lived — and cooked meals.

After the fire station closed, De Rosa’s Brick Oven Pizza moved in. Later it was the site of Neat — a coffee spot by day, wine and cocktail bar at night.

The Vigilant Firehouse on Wilton Road, circa 1977.

The chef/owner of The Cottage — the much-heralded New American restaurant in Colonial Green — will open a Japanese restaurant there this fall. The yet-to-be-named place adds to the burgeoning West Bank culinary scene, which already includes Bartaco and The ‘Port.

The menu is “Izakaya meets Omakase.” 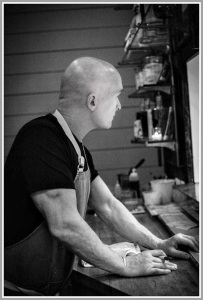 Lewis and his Cottage architect will work together again. They hope to bring out the original character of the historic building, while melding Japanese cooking with an American chef’s vision.

This past spring, Lewis tested a weekday menu at the Cottage. It was an instant hit.

He soon added a sake program, plus new cocktails. That spurred him and general manager Charlie Gihuly to search for a suitable place with history and “great bones.”

They found it — in a spot with a culinary past they look forward to building upon.

Not So Neat News

A sign taped to the door of the former Wilton Road fire station — nestled between Vespa and Bartaco, serving sandwiches and coffee during the day; beer, wine and cocktails in the evening — announces:

We are sad to say that we are no longer open for business here in Westport. We appreciate your patronage for the past 2 years, and we hope to see you around at our Darien location.

Gratified for the opportunity to have served you here.