Yesterday, Richard Blumenthal was in Texas. He toured a border processing center, and a detention center packed with 250 boys.

Today, Connecticut’s senior senator was in Westport. Standing on the Ruth Steinkraus Cohen Bridge, lined with the flags of dozens of nations, he pointed to America’s stars and stripes flying directly overhead. 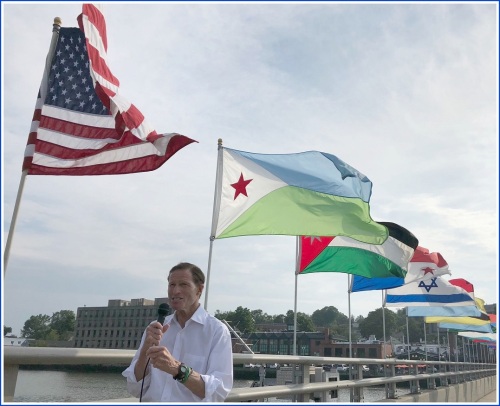 Connecticut Senator Richard Blumenthal on the Post Road bridge this afternoon. He pointed to the American flag — flying with many others — and said its values are more important than ever.

This country’s values are very important, he said told a crowd of about 100. They gathered to protest President Trump’s immigration policies.

But those values are under attack, Blumenthal continued. And, he warned, darker days may lie ahead.

Before he spoke, Sen. Richard Blumenthal (far left) stood with the crowd on the Ruth Steinkraus Cohen Bridge. They listened as protest organizer Darcy Hicks described the important of speaking up against President Trump’s immigration policies.

The senator spoke of his own father — an immigrant fleeing Nazi Germany. The current president, he said, would have turned that 17-year-old away.

Blumenthal thanked Westporters for caring, and for speaking out and standing up. Those values, he said, are more important than ever.

One of the signs seen at today’s protest. 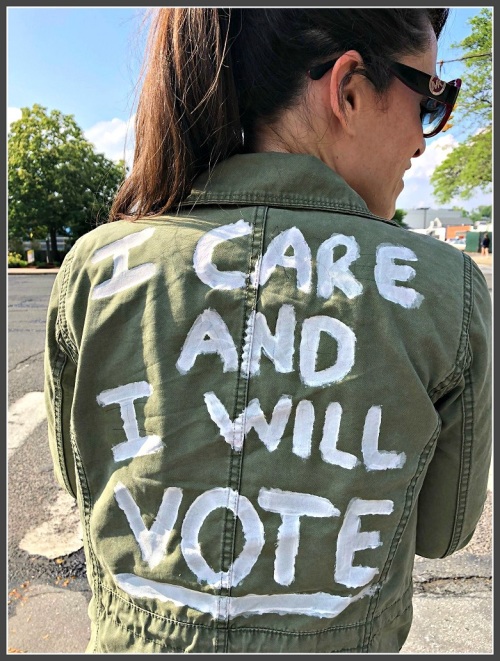 This message counters the one worn on a jacket his past week, by First Lady Melania Trump. It read: “I really don’t care, do u?” (All photos/Dan Woog)