Every week, the Artists Collective of Westport members meet by Zoom. They talk about their challenges as artists, and share idea about current projects.

The latest group show came out of a recent meeting. Called “24/7 @ 47 Main” — and described as a “pandemic-friendly” exhibition — it’s a 10-minute video featuring 81 works from artists all over Connecticut.

It runs continuously on a large screen in the window of 47 Main Street (opposite the former Banana Republic).

Not comfortable venturing out quite yet (or just lazy)? Check out 2 options online.

One (below) is the show on the Artists Collective’s YouTube channel:

The other is a website. It’s got every exhibition image — plus details on each piece. There’s information too on how to contact an artist, for purchases. Click here to see.

So even though the physical “show” is in Westport, it’s accessible to anyone, anywhere in the world.

She joins right in. No one cares that it’s the next day there already.

Amy Kaplan’s “Screened” is one of 81 works in the current show.

Cynthia Armijo has a degree in biology. She spent most of her career in financial services. She’s been a management consultant, a director with regional and national Boys Town organizations, and CEO/executive director of the Norwalk YMCA.

That may seem an odd resume for her new position: executive director of the Westport Arts Center.

On the other hand, the San Francisco native has prepared for her new gig all her life.

A Weston resident for 10 years, Armijo and her husband —  he’s also in financial services — “jumped at the chance” to move east. They knew New York well from work, and their oldest daughter thrived at Weston High.

Growing up, Armijo saw her family constantly give back through service to non-profits. She’s been a board or committee member of various organizations since her 20s. (Her first volunteer effort was with San Francisco’s Sisters of Mercy; she ended up as board chair.)

Starting in 2007, she’s leveraged her financial and management skills in the non-profit world. (That’s where Boys Town and the Y come in.)

“I look for premier organizations wherever I work,” Armijo says. “And the Westport Arts Center has the potential to be the premier arts center in Fairfield County.”

Armijo ticks off its pluses: a passionate base of supporters; an active, engaged board; broad, wide-ranging programs; strong leadership under artistic director Helen Klisser During.

Armijo saw the executive director position posted, applied, and was “hooked right out of the gate. There’s a great strategic vision to continue bringing great art to the community.”

Of course, there are challenges.

“The gallery is in a nice location, but the size limits us,” Armijo acknowledges. “I’d love to have a larger, more accessible venue.”

Her office looks across the river, to the Levitt Pavilion and Westport Library. “We need to be there too,” Armijo says.

But that’s ahead. Right now she’s happy to talk about programs like children’s after-school and summer offerings (“I have to close my door, or you’d hear 50 kids”), and inspiring outreach at Yale-New Haven’s Smilow Cancer Center, and Bridgeport’s Homes for Heroes.

She’s also looking forward to meeting the heads of important Westport organizations — many of whom (the library, Y, Staples High School) are or will soon be new, like her.

Cynthia Armijo’s office in the Westport Arts Center overlooks the river — and the Levitt Pavilion. (Photo/Helen Klisser During)

As for Armijo’s own artistic bent, the biology major/financial services professional/management consultant is a huge fan of impressionism. Another corner of her home is filled with 16th-century engravings.

“I dabble in oil too,” she says. “But you will never see anything of mine exhibited publicly.”

It was filled instead with budding Miggs Burroughses — and the actual artist himself.

Dozens of Westporters — and visitors from as far as Venezuela — traced family members, friends and random strangers on the blue construction fence surrounding the Bedford Square downtown development project.

Then they picked up paint brushes, and added color — lots of it. The fence will remain up for another 2 years. 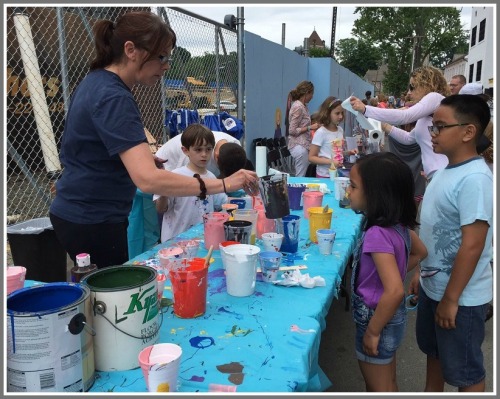 There was paint for everyone on Church Lane today. 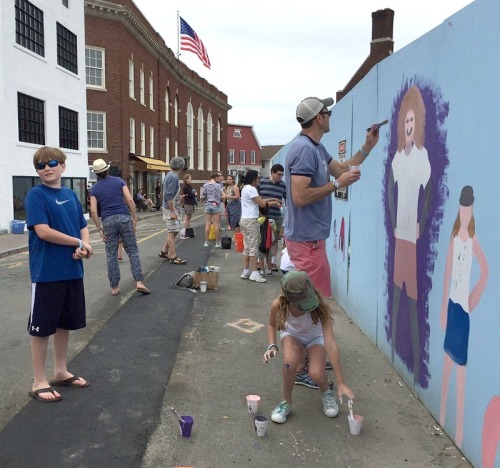 Artists and supervisors, all hard at work on Church Lane.

Dereje Tarrant — a rising 3rd grader at Saugatuck Elementary School — waits for his mom Zoe to wash a brush. On the wall behind them are images of Dereje and Zoe.

This little boy was so intent on his creation, he couldn’t stop to give his name.

Marla Velez is from Venezuela. She came to Westport with Maria Velez, from Shelton, just for the chance to paint the wall.

Jahmane — the Westport Artists Collective member who painted the Minute Man at the east end of the wall — traced yours truly. In the shot above, he’s adding a soccer ball to the wall. (Photo/Helen Klisser During)

Alex Andra lives around the corner, on Main Street. She broke up the parade of people, drawing this creature.

Meanwhile, work continued on Bedford Square during the “Westport Paints the Town” event. Construction is expected to take 2 years.

Today’s New Haven Register has a story on one of that city’s “best-kept secrets”: a 4th-floor corridor leading from the Smilow Cancer Hospital to a parking garage. It doubles as a “mini-art museum.”

The “06880” hook — beyond the hospital being named for a philanthropic local family — is that the current exhibit, “Abstract Notes,” was created in conjunction with the Westport Arts Center.

All the art — called “almost breathtaking for its simplicity and meaning” by the Register — was produced by people affected by cancer.

Nine patients and 1 family member worked with Westport teaching artist Nell Bernegger, a WAC member. In five 2-hour sessions, she helped them learn how to express their feelings through art.

WAC education manager Sarah Kelley notes that the patients did not “over-think” their work. It was “about living in the moment and letting go,” she says.

At tables with heavy watercolor paper, brushes, water, mixing trays and gouache, they heard Bernegger talk about her own painting process. They meditated, did a brief breathing session, and got to work.

At the end of each session, the budding artists talked with the group about what their art meant to them.

Curator Helen Klisser During — the WAC director of visual arts — chose 1 painting by each participant. She had them framed, and mounted on the walls.

“Vibrance” by Cheryl Thomas, on display at the Smilow Cancer Center. (Photo by Arnold Gold, courtesy of New Haven Register)

Everyone walking to and from the parking garage enjoys them. And, the Register notes, they’ve opened some eyes.

“I see these patients every day,” a hospital staffer said. “But I had no idea they could do this.”

For During, “that’s just the point. When art comes from the heart, it doesn’t matter if you’re an artist or not. The work touches everyone.”

(To read the entire New Haven Register story, click here. This is part of a broader “WAC Gives Back” program, which brings healing arts experiences to local veterans, students at the Bridge Academy, seniors at Meadow Ridge, and children through “Special Arts.”)

The Art Of Longshore

It seems no aspect of Longshore is overlooked this year, as Westport celebrates the 50th anniversary of the town’s purchase of a failing country club — and subsequent redevelopment into a town jewel.

That’s art, as in oil paintings and photos.  Longshore offers almost unlimited opportunities — the tree-lined entrance, scenic marshes, handsome Inn — as well as historic subjects like the lighthouse and old apartment building that no longer exist.

Tomorrow (Friday, June 4, 6 p.m.), the Westport Public Library honors “The Art of Longshore” with an open-to-the-public reception.  Generations of artists’ works will remain on display through July 30.

Some of the prints, paintings and photos are old; some very recent.  Each presents a different facet of Longshore’s beauty.

None, thankfully, shows what might have been had Westport not acted so swiftly 50 years ago:  240 homes crammed together on what was  considered the most lucrative building site in town.

Comments Off on The Art Of Longshore