Everyone knows about TED Talks.

But here in Westport, we’ve got TEA Talks.

The topic is timely and relevant: Art and Social Change.

In a nod to today’s fraught times, they’ll ask (and hopefully answer): “Does it take difficult times or momentous events for artists to create work that is a form of political and social currency?”

In the late 1960s, Naiad Einsel’s “Save Cockenoe Now” posters were a local symbol of the intersection of art and social change.

And John Dodig (former Staples principal) will chat with 2011 graduate Haris Durrani about the young writer’s fiction novella, “Technologies of the Self,” about the life of a young American Muslim after 9/11.

Durrani will also be presented with the Horizon Award, given annually by the Arts Advisory Committee to a Westport artist under the age of 32 who shows extraordinary accomplishment and potential.

A reception follows the intriguing TEA talks, at the Westport Historical Society across from Town Hall.

The soon-to-graduate senior was in a different auditorium:  Carnegie Hall.  He was accepting a Scholastic Art and Writing Award gold medal, for his portfolio of work.

This is a biggie.  Previous winners include Joyce Carol Oates, Truman Capote and Andy Warhol.

At Carnegie Hall, he hung out with Mayor Bloomberg.  Professional actors read his words.

And he was interviewed for NPR’s “The Takeaway.”

For nearly 10 minutes, Haris talked easily with John Hockenberry about his life — literary and otherwise.

The son of a Dominican mother and Pakistani father, Haris grew up Muslim in a post-9/11 world.  Feeling a duty to represent himself and his communities well, Haris writes about diversity and social justice with insight and perception.

Writing allows Haris to try to figure out who he is — while challenging readers’ preconceptions and assumptions.  One of his stories about racial profiling explores a policeman’s misjudgment of an Asian/Hispanic woman.

But, Hockenberry noted, Haris also shows sympathy for the cop.

“We’re all on the good guys’ side,” the young author explains.  His feelings about diversity and human rights derive, he says, “from growing up in America.”

Hockenberry got Haris to reveal that one of his early influences was Isaac Asimov.  What the interviewer did not say — and may not have known — is that besides being a national award-winning writer (with Scholastic Gold Key honors for memoir and short story, along with his portfolio), Haris is also captain of Staples’ robotics team.

You can’t make this stuff up.

Only Haris Durrani could.

To read NPR’s Takeaway story on Haris, click here.  To view a video of Reg E. Cathey from “The Wire” reading Haris’ “Jedi Night,” click below:

To hear the Takeaway interview, click the arrow below:

On Wednesday “06880” ran a story on Staples’ robotics team — 1st in the Northeast, now shooting for an international championship.

That was only part of Haris Durrani’s week.

Out of 185,000 entries in the Alliance for Young Artists & Writers contest, only 16 qualified for gold.

Haris will be honored onstage — at Carnegie Hall — on May 31.

Unless, that is, he’s got a robotics competition elsewhere in the world.

Soon the NBC news anchor, Microsoft genius and “education president” may all sing the praises of Staples — at least, the school’s robotics team.

The “Wreckers 577” team obliterated 21 schools from New England, New York and Pennsylvania at last weekend’s tournament at Kingswood Oxford School.  The Wreckers defeated all other teams in their division through 5  challenges, then swept the semifinals and finals.

Even more remarkable:  Though the team was mentored by a pair of Staples students — Haris Durrani and Timothy Yang — they easily defeated much more well-funded teams, including 2 mentored by MIT faculty.

If you’re unfamiliar with robotics tournaments:  Each match of the challenge includes 2 types of play.  Autonomous relies on pre-programmed routines; the other is operator-controlled.

Each team completes various tasks.  This year they — the robots they built, that is — took batons out of a holder; maneuvered across “mountains,” planks and rough terrain to place the batons in cups on casters; and balanced on a plank with casters.

The regional championship qualifies the Wreckers 577 robotics team for the world championship, set for St. Louis in April.  Over 500 teams from 50 countries will compete in the Edward Jone Dome.

For nearly 2 weeks we’ve watched snowboarders soar, speed skaters fly, and curlers do whatever it is they do.

It’s been a great spectacle — particularly if you enjoy watching sports several hours late on tape delay, even though they are being held on the exact same continent where you live.

But exciting events are not confined to athletics.  Five Staples students discovered that last Sunday — in the regional FIRST Tech Challenge robotics competition, at Pace University.

All day long the 5 — Haris Durrani, Jehangir Hafiz, Eric Lubin, Todd Lubin and Tim Yang — struggled.  They faced — and overcame — a variety of mechanical and technological challenges, and finished the qualifying rounds in 4th place. 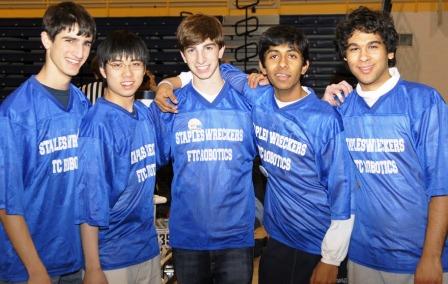 In the championship round, “Tank Aaron” — they named their team after the famous baseball player — faced a pair of New Jersey squads.  The Westporters’ controllers began to malfunction.  In the finals — a best-of-3-games series — they won their 1st game, then lost as the other robots ganged up on theirs.

In the 3rd game of the 3rd match, they had just 2 minutes and 30 seconds to fight their way to the World Championship in Atlanta — or go home.  Tank Aaron was virtually scoreless the entire time, as their opponents fought to keep the high-scoring robot from shooting Wiffle balls into scoring areas outside the field.

As the clock hit 15 seconds, Tank Aaron shot from the middle of the field — a risky and seemingly impossible shot.  Balls poured into the outfield scoring area for the next 5 seconds.  The New Jerseyans were so shocked they forgot to maintain control of their robot, so Tank pushed closer toward the goal.

Even more balls scored in the next 5 seconds.  By the final 5, the crowd was on its feet, screaming.  Tank Aaron won — and they’re headed to The Big Dance in April. 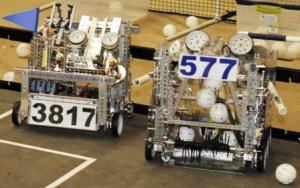 Tank Aaron (right) beat that poser #3817, with plenty of balls to spare.

“It was too close for comfort,” Haris said a couple of days later — still stunned by the finish.  The team had met for 7-8 hours a day — sometime until 2 a.m. — every day for the previous week.

Their hard work paid off.   They even were named finalists for the Innovate Award for creative and consistent robot design.

Now the real work begins.  Tank Aaron plans to improve the robot, from head to toe.

So the 5 robotics team members still won’t have time to watch even a minute of skiing,  hockey or — damn it! — curling.