The blogosphere is filled with Westport dining news.

Sure, it’s in Armonk, New York. But area diners will go anywhere for “Italian food, cooked simply, in wood fired ovens” that is elevated “with a thoughtful culinary execution and a familiar, if familial, disarming vibe.”

What makes this just-over-the-border place “06880” worthy — besides its “rustic hipster vibe” — are its owners. Two of the 3 — Rob Krauss and John Nealon — are Staples grads.

They met at a place not normally associated with fine dining: the Wrecker football field. They’ve been good friends ever since.

John Nealon, Christian Petroni and Rob Krauss are the masterminds behind Fortina. (Photo/CTBites)

CTBites says that Rob, John and non-Stapleite Christian Petroni seems “more like a brotherhood” than a partnership. And “this feeling translates across the restaurant’s service team and into its dining room.” All 3 formerly worked at Barcelona (whose co-founder is Staples graduate Sasha Mahr-Batuz).

Krauss says, “There is a complexity to the simplicity.” CTBites believes that applies to the restaurant’s team, as well as the menu. They are “an extended family of sorts that works equally hard at the food as they do cultivating the culture at Fortina.”

Meanwhile, over on Sunday Diners — the blog about Fairfield County’s best breakfast spots, written by 5th grader Alex D’Adamo — the buzz was all about Cocoa Michelle.

Alex says the newest addition to Saugatuck Center makes you feel “like you’re in your own home. Everyone is really friendly, and it was filled with customers including a lot of kids. (She also had Wiki-Stix which kids love.)” He calls the food “exceptional!” 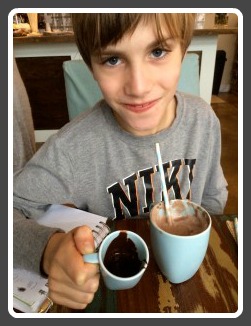 Alex got “the kick” he was looking for from the pulled pork sweet potato hash. But he saves his biggest rave for the hot chocolate. And — either because he is an important blogger, or because she is just a really nice woman — owner Michelle Weber gave him “some of their really thick chocolate, the kind you usually dunk churros in.”

Alex’s father had a 3-egg omelet, with crushed rosemary-marble potatoes, buttered brioche with goat cheese, and fines herbes. “He loved it,” Alex reports.

CTBites did not grade Fortina. But we are sure its bathroom is as cool as its food, too.

Coffee An’ is so good, President Clinton ordered donuts from there.

Those are some of the on-target observations of Alex D’Adamo, gleaned from regular Sunday morning breakfasts with his dad.

A few years ago a 3rd grader — which Alex is — might have told those things to a couple of friends. A particularly creative kid might have written them down.

Now — with a bit of help from his father, James — he publishes Sunday Diners. Once a week, Alex’s relatives, his teacher — and random strangers, searching for things like “father-son breakfasts Fairfield County” — read Alex’s comments about the places he goes.

As well as his numerical ratings of “Food,” “Service,” “Looks” and “Bathroom.” (That’s very important. “If there’s toilet paper all over the floor, that’s gross,” Alex says. “If the bathrooms are clean, the kitchen is too.”)

Here are some of his recent comments on Gold’s:

Even though Gold’s is mainly known for their lunches like Pastrami and Corned Beef sandwiches and Hebrew National hot dogs they also make great breakfasts.  Except, they don’t serve eggs or pancakes, because, the kitchen at Gold’s is too small for that.  But that’s OK, because they say they have the best lox in the state, and that’s what I came to try today….

Before I even had my Nova, Karen the server gave me some pickles which were also really good — I’ve never had pickles at breakfast, but I had to try them.

After a bit of history of Christie’s, and before an interview with owners John and Renee Hooper, Alex wrote:

Today I had the Egg, Bacon & Cheese Sandwich on a toasted poppy- seed bagel — one thing I noticed was that the Egg Sand- wiches were very popular, it seemed like every person coming in the store was ordering one — one guy actually came in and bought not one…not two… not three… four or five… BUT six of them!  I wonder if he ate them all himself!  I also had some home fries which were tasty and hot.

Alex has always loved breakfasts with his dad. He remembers his 1st: at Commuter Coffee in Westport. That’s still a favorite.

“When I was little, I loved to watch the trains go by,” the 3rd grader recalls. “And Tommy (the owner) was always very nice to me.”

Sunday Diners’ 1st anniversary is coming up. Alex hopes to continue discovering great new places for breakfast for a long time to come.

And, on a return visit to Gold’s, he might even try that tongue sandwich.