Yesterday’s Jesup Green protest against the Minneapolis police killing of George Floyd — and systemic racism in America — was planned in just 48 hours. It was well publicized.

This morning, another protest took Westport by surprise.

A group of 100 or so mostly young people — many wearing black, all wearing masks, and reportedly from several area towns — gathered at Jesup Green. 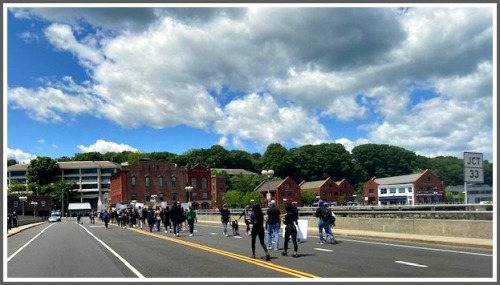 The protesters headed west on the Post Road toward Norwalk, then returned. With a police escort — chanting “Get off my neck! Black lives matter!” — they returned to Jesup Green.

Right now (1:30 p.m.), they are massed in front of the Westport police station. Norwalk police were on hand to assist.