How To Survive A Quarantine? With Staples Players!

When “Seussical” was shut down just hours before opening night — collateral damage from the COVID-induced closing of all Westport schools — dozens of Staples Players were heartbroken. Audiences never saw their months of hard work.

Seniors were particularly devastated. The spring show is a capstone to their 4-year careers. On closing night they’re introduced individually, celebrated, and take well-deserved bows.

There’s an old theater saying: “The show must go on.” For over 60 years Players’ has honored that tradition. They’re not about to let a little pandemic stop them.

The show is not “Seussical.” But this Saturday and next, the nationally recognize troupe presents a special event. It’s a gift to the community — and a tribute to the 2020 seniors.

“10 Ways to Survive Life in a Quarantine” was written by Don Zolidis. The playwright specializes in shows for high school groups. Several years ago, Players staged the world premiere of his musical “Angie” at Toquet Hall. 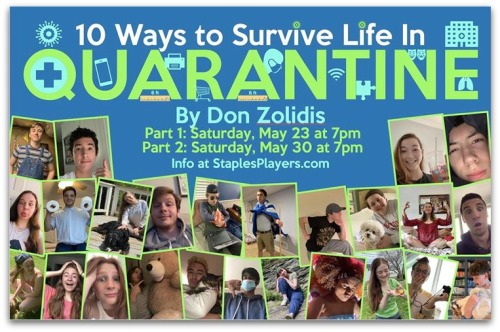 This spring, Zolidis recognized the need for a play that schools could produce virtually, while maintaining social distance. Very quickly, directors David Roth and Kerry Long got to work.

They invited all their 12th grade veteran members to participate. Fifteen are acting; a few others are helping behind the scenes, like stage manager Karalyn Hood.

Thirteen additional cast members, spanning all grades, bring the total “on stage” to 28.

“10 Ways” includes over 25 comic vignettes, dealing with life in isolation. One is about staging musicals with pets; others cover taking up a new sport (and thinking you’re good), perfecting the art of laziness — you get the idea.

Some sketches will be performed live (fingers crossed). Others will be pre-recorded videos. Seniors Sam Laskin and Tobey Patton host the show — and offer live commentary throughout.

For the past month, rehearsals were held via Google Meet. Three student assistant directors also held individual meetings with actors.

The concept is new for Players. So is the technology. Tech consultant (and alum) Dave Seltzer is advising on livestreaming; fellow Player alum Michael Dodd  helps.

“We’re working through our live run-throughs,” the directors say. “But we’re charting new ground. What a crazy world!”

The show is broken into 2 parts. The first will be broadcast this Saturday (May 23, 7 p.m.) The second is set for the same time the following Saturday (May 30). There are “encore” performances (taped) at 6 p.m. on the Tuesday following each performance (May 26, June 2).

Tickets are free for the live and encore shows (click here; if you want tickets to a Tuesday “encore,” click the Saturday prior to it).

However, Roth and Long encourage donations of any amount. The cancellation of “Seussical” (and the spring Black Box production, “Noises Off”) has hurt considerably.

That — and with this clever new show — are 2 ways by which Staples Players can survive life in a quarantine.

NOTE: After your purchase, you’ll receive an email with printable “tickets.” Ignore that — but save the other email, which includes a link to access the show.

Like Loading...
This entry was posted in Arts, Entertainment, Environment, People, Staples HS, Teenagers and tagged "10 Ways to Survive Life in a Quarantine", Coronavirus, COVID-19, Staples Players. Bookmark the permalink.

One response to “How To Survive A Quarantine? With Staples Players!”