Much has been written about the spread of COVID-19, and the importance of social distancing, self-isolation and quarantine.

But it’s one thing to read about protective measures. It’s another thing entirely to watch them unfold.

Thanks to Washington Post graphics report Harry Stevens, we can.

And — because the 2004 Staples High School graduate’s piece on the virus has been shared relentlessly by readers — so can the rest of the world.

The “corona simulator” (click here to see) provides vivid evidence of how a disease spreads through a population. Moving dots represent healthy, sick and recovered people.

The dots move randomly, interacting with other dots. Importantly, each viewing of Stevens’ simulation is different. My random sample is different from yours. In fact, each time you scroll up and look at the graphic again, it’s different. 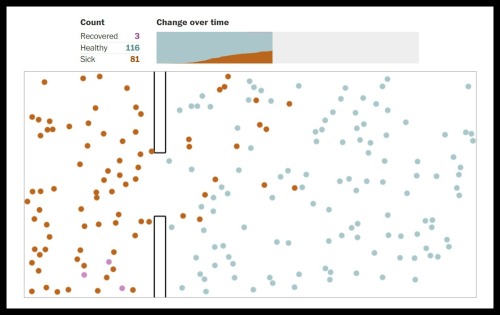 That illustrates the randomness of our encounters with each other. But the key finding is usually the same: Extensive distancing is the best way to slow the spread of disease.

(There is one unrealistic element to his moving graphs, the story notes: Dots don’t “disappear” when someone “dies.”) 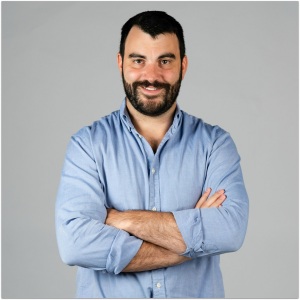 Stevens’ route to the Washington Post began in another down time: the recession of 2008. After acting in Staples Players and college, he graduated at a time of few enticing professional opportunities.

“I kind of fell into journalism by mistake. But I liked it,” he says.

So he headed to Columbia Journalism School, to learn enough to be hired by an actual newsroom.

At Columbia, he saw how journalists can enrich their reporting through data analysis and visualization. He was hooked.

A year after graduating he followed his girlfriend (now wife) Indrani Basu back to her home town: New Delhi. She’s a fellow journalist, and had just gotten a great job helping launch HuffPost India, as news editor.

Stevens landed a newspaper job in Delhi. They let him experiment with “all kinds of weird ideas” about how to do data journalism on the internet.

“It’s really cool,” he says. “There are so many smart and talented people here, so there are lots of chances to learn new things and get better at the craft.”

The idea for the COVID-19 story began as he read how diseases spread exponentially. “I had a hard time internalizing what that means,” he says.

A year earlier he’d been experimenting with making circles bounce off each other. He realized now that he could apply that to show how network effects work.

When he got the basic simulation working (with help from data pioneers Bret Victor and Adam Pearce), he realized the story could be “very cool.”

As well as amazingly educational, and incredibly important.