Wise Words At The Farmers’ Market

A group of retirees gathers every morning. They sit in the same seats. Over a single cup of coffee, they chew over all the problems of the world.

A group in Salt Lake City realized that all their wisdom, all that advice, went to waste. No one listened to them.

So one Saturday, they headed to the local farmer’s market. They hung a sign — “Old Coots Giving Advice” — pretty much as a joke.

To their amazement — and despite the disclaimer “It’s pretty bad advice,  but it’s free” — people wanted to listen. 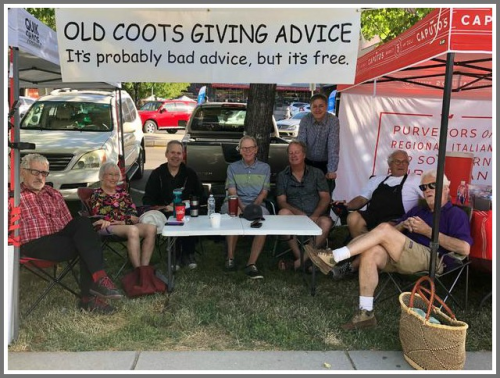 Sarah Gross saw a CBS News story about the group. Suddenly, a light bulb went off over the longtime caterer’s head: There are plenty of older Westporters, with lifetimes of experience and a wealth of advice.

And we’ve got a Farmers’ Market.

Which is why this coming Thursday (September 19), a group from the Senior Center heads a few yards south on Imperial Avenue. There — under a table, tent and chairs — the writing group led by Senior Center coordinator of writing programs Jan Bassin will offer advice to anyone who wants it.

The official topic is “what we would have said to our 25-year-old selves.”

But feel free to ask about anything else, from turnips to Trump.

A couple of old coots at an early Westport Farmers’ Market.

FUN FACT: Robert Penn Warren rocked Sarah Gross in her crib, and Ralph Ellison held her in his arms when she was an infant in Westport. Her extended family was made up of  authors and artists and the like — and her father was a book editor and literary agent until his death a few years ago.

4 responses to “Wise Words At The Farmers’ Market”