The Art Of Golf Balls

Like many “06880” readers, Heather Heenehan was grossed out by a recent Pic of the Day. It showed dozens of golf balls floating in the water near Longshore’s Hendricks Point driving range.

They weren’t the only place the Greens Farms Academy teacher had seen them.

Last October, her Oceanography class found a golf ball during their monthly survey of the nearby Burying Hill Beach shoreline.

Curious, they picked it up.

Then they found more, nestled in the rocks. They picked them up too, to clean the beach.

The students realized they now had important evidence of marine debris. They continued the project in Heenehan’s Marine Biology class this spring. 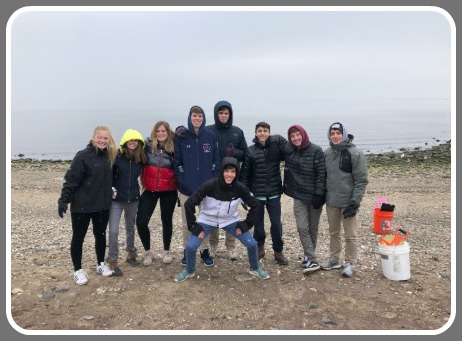 They learned that in the water, golf balls break down into small pieces of plastic that are unhealthy for marine organisms to digest.

But what to do with the 121 golf balls they’d collected — a small fraction of the amount in Long Island Sound? How could they draw attention to what they’d found?

They were inspired by Alex Weber, a California high school student who also noticed golf balls around her coast. She and a few friends collected 50,000 (!).

Heenehan’s students cut and painted their golf balls into a mural.

The bottom layer represents the land along the shoreline: green representing seaweed, brown and tan for rocks and sand.

The middle piece portrays the oceans, with various creatures scattered throughout.

The top piece is the sky and sunset. 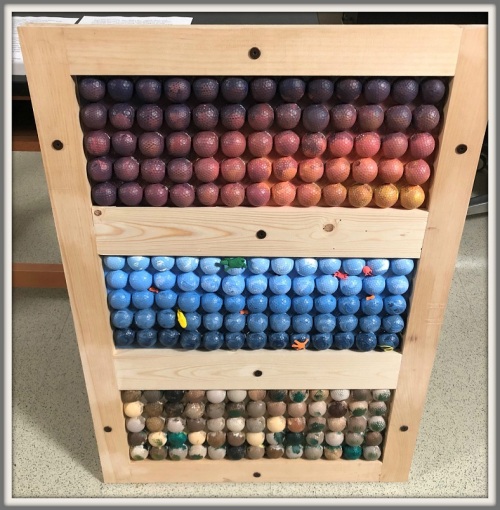 7 responses to “The Art Of Golf Balls”