When Ben Frimmer began teaching 5th grade at Coleytown Middle School in 1995, he lucked out.

Justin Paul was in his class. 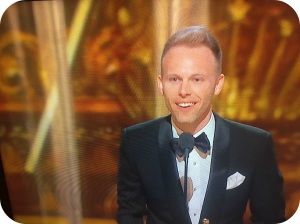 Ben also directed Coleytown Company — the acting and tech troupe — and Justin was a natural. He starred in the middle school productions of  “Peter Pan,” “Bye Bye Birdie” and “Fiddler on the Roof.”

After  Staples High School, Justin went on to fame — including Oscar, Tony and Grammy awards — with his songwriting partner Benj Pasek, for mega-hits like “Dear Evan Hansen,” “La La Land” and “The Greatest Showman.”

Ben has stayed at Coleytown, influencing countless youngsters in the classroom and on stage.

Teacher and former student stayed in touch. In 2003 — as a Staples High School senior — Justin served as music director for Ben’s production of “Footloose.”

“I wanted someone young and hip,” Ben recalls. “He totally handled it.”

This year — as Ben began planning Coleytown Company’s spring production — he thought of “James and the Giant Peach.” Early in their career — in 2010 — Pasek and Paul wrote the music for the theatrical adaptation of Roald Dahl’s beloved tale.

“‘Dogfight’ would not be appropriate” — that’s the Pasek and Paul play (with a book by Westporter Peter Duchan) about Marines and their night of debauchery — but “James” definitely is.

The musical is about a boy who loses his parents, and lives with angry, conniving aunts. Through a bit of magic, a peach and some bugs become giants. James is embraced by the bugs, and finds happiness with them.

Ben got rights to the show. Then he asked Justin if he could work with the Company. The cast numbers more than 50, with a tech crew of 20 more.

So despite an insanely busy schedule — including the Oscars last Sunday — Justin will be at Coleytown this Friday (March 9). He’ll play piano, and rehearse with the kids from his alma mater.

“That’s who he is,” Ben says. “And he’s as excited as they are, for this once-in-a-lifetime experience.” 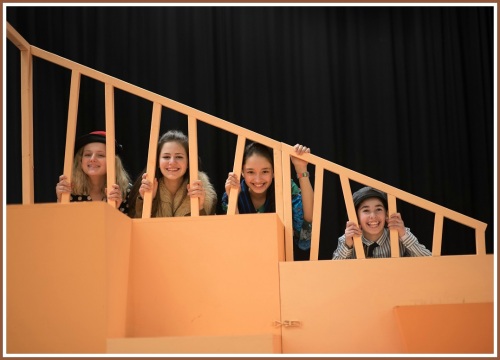 The youngsters all know who Justin Paul is. Many have seen “Dear Evan Hansen,” and everyone knows “The Greatest Showman.” The film’s song “This Is Me” has become a worldwide smash.

Ben says this is not the first time that Justin has reached out to the town — and schools — that gave him his start. He’s invited Ben and Staples Players directors David Roth and Kerry Long to the set of “Showman.” He also brought all theater teachers in Westport to tech rehearsals of both “Evan Hansen” and “A Christmas Story: The Musical.”

Now he’s inspiring not just teachers, but the next generation of theater-goers.

And actors, who may — who knows? — one day perform in another great film or show, with music by Justin Paul.

“James and the Giant Peach” will be performed at 7 p.m. on Friday, March 23 and Saturday, March 24, and at 1 p.m. on March 24 and Sunday, March 25. For tickets and more information, click here (search for “Coleytown”). For ticket questions, email swebster@westportps.org.