All around Westport, homeowners proudly display plaques bearing the dates their houses were built: 1884. 1720. 1683.

(Others, of course, proudly display the many gables and great rooms of the homes they’ve built to replace those historic ones. But that’s a different story.)

Gault was already 57 years old — just a little younger than Mitchells of Westport is now — in 1920, when workers installed a coal-fueled heating unit for the Abbott family. 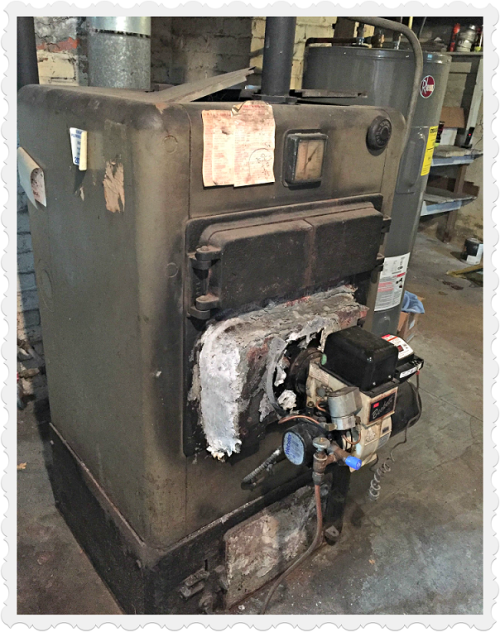 The 96-year-old boiler in the Salmonds’ basement.

The Dutch colonial on St. John Place has been renovated several times since Woodrow Wilson was president. But the boiler was the same.

This week, company president Sam Gault presented homeowners Willie and Anne Salmond — a retired couple — with a state-of-the-art new one. It’s quite a 45th wedding anniversary gift: The value is $11,000 (including installation).

(And it came not a moment too soon. Sleet fell yesterday, on the coldest day of the fall.) 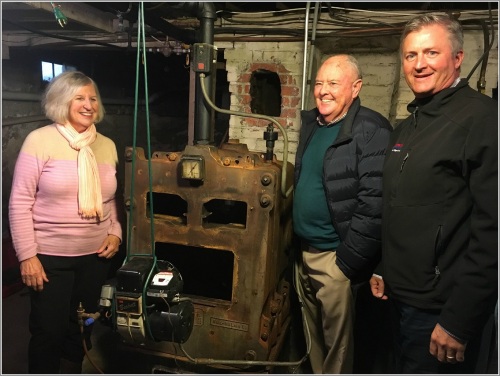 The Salmonds — who moved here in 1984, when Gault was just 121 years young — have an interesting story themselves. They raised 3 children in Westport, but also traveled extensively for work. Among other things, he served in Uganda with an HIV/AIDS prevention program, while she did foundation work in India.

Both are members of the Saugatuck Congregational Church. He’s recently taken on preaching assignments there, and at Christ & Holy Trinity Episcopal Church.

Willie is from Scotland. Anne is from Northern Ireland. Both grew up in homes where heat was a luxury. In fact, coal was used in bedrooms only if someone was sick.

As a New England winter nears, the heat is welcome — especially since Anne has arthritis.

They thanked Gault for its generosity, noting that since retirement they wanted to spend their money on what Anne calls “things you can see. We ignored the old dinosaur in our basement.” Now, they’re inspired to take on other domestic  projects.

Here’s one final twist: The original owners of the Salmonds’ house — the Abbotts –are related to the Gaults through marriage.

How’s that for a heart-“warming” story?

10 responses to “This Old Boiler”