Bordered by a river, train tracks and I-95, Saugatuck can’t get much bigger.

But it keeps growing. New apartments, restaurants and businesses make Westport’s original center — and “2nd downtown” — livelier than ever.

Slice of Saugatuck grows each year too. The 4th annual edition — set for Saturday (September 12, noon-3 p.m.) — is the biggest yet. 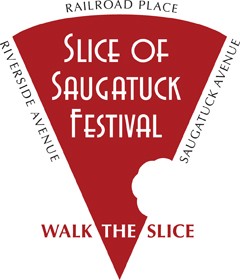 More merchants than ever — 44 — are participating. Over 2 dozen eateries will offer food and/or drinks; other shops will show off their wares. There’s a new mini-Maker Space, drones, obstacle courses and more, along with 7 musical groups (and the fire station’s traditional open house).

It’s a triple win for Westport, says Chamber of Commerce executive director Matthew Mandell, who created the 1st Slice of Saugatuck in 2011.

It promotes Saugatuck merchants and the area. It gives the community a great event. And it raises money for the homeless and hungry.

The Homes With Hope Gillespie Food Pantry is again the beneficiary. They received $10,000 in proceeds from the past 2 festivals.

Slice of Saugatuck tickets are $10 per adult, $5 for children 6-12 (available on site). Any way you slice it, that’s a bargain!

From Bridge Square to Railroad Place — and everywhere else — Slice of Saugatuck is packed. (Photo/Terry Cosgrave)

Like Loading...
This entry was posted in Entertainment, Organizations, Saugatuck and tagged Luciano Park, Matthew Mandell, Slice of Saugatuck. Bookmark the permalink.

3 responses to “Super Slice Of Saugatuck Set For Saturday”