An Art Director Draws On The Past

The removal last weekend of Max’s Art Supplies’ iconic sign — and the snapping of a group photo reminiscent of a 1981 shot with 100 artists, not to mention a recent “06880” post connecting the end of “Mad Men” with a Westport art director — got John Kennedy thinking. 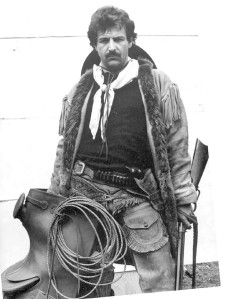 John Kennedy modeling around 1980 for the famed Civil War illustrator Don Stivers. All the gear is authentic.

The longtime local resident is one of a once-large-but-fast-diminishing crowd of artists, illustrators, admen and other creative types who once kept Max’s hopping. As well as many other Westport businesses (including, significantly, bars and restaurants).

As Max’s sign came down, Kennedy recalled those long-gone days. In 1970 he’d returned home from the Air Force determined to do professionally what he’d done in the service: be an illustrator.

“Westport had always been a center of excellence, and I was determined to succeed,” Kennedy says. “I thought to be part of the scene, I had to ‘make the scene.'”

So he headed to Max’s. He picked up a shading stomp, some charcoal pencils, a couple of pads and a kneaded eraser.

He started to put some items back. Max Kaplan stepped up.

“An artist needs his tools,” the owner said. “I’ll give you credit.” He told Shirley Mellor to open account for Kennedy.

“I had no credit,” the budding illustrator says. “Max said, ‘I trust you.'”

Kennedy walked out with everything he needed. A month later, he paid Max back.

One of John Kennedy’s first paintings. Max Kaplan sold him the canvas. Shirley Mellor sold him the See-Rite projector for scrap use. Nina Royce sold him the paints after Shirley recommended usiing colored pencil and acrylic because, she said, “once it is dry, it is permanent!” And Jay Cimbak framed it.

Kennedy went on to work for Golf Digest and Tennis Magazine. More magazines, some illustrations, book designs, and an agency called The Art Department followed.

Through it all, Max’s was Kennedy’s go-to place. As a director, he happily sent others to the store too.

Then the world changed. With computers, Kennedy says, “publishers no longer cared about quality. They took design and excellence, and turned it over to lesser staff to just ‘get it out.’ Illustration was done in the box. All of the skill, talent, education and technique disappeared.”

Today, he adds, “artists are leaving us. They are replaced by wannabe idiots who know nothing, and do little but talk.”

As Max’s closed last year, Kennedy called himself “the last director. The last of my breed. I will hide, and let the world only wonder what true art is. Nobody cares.” 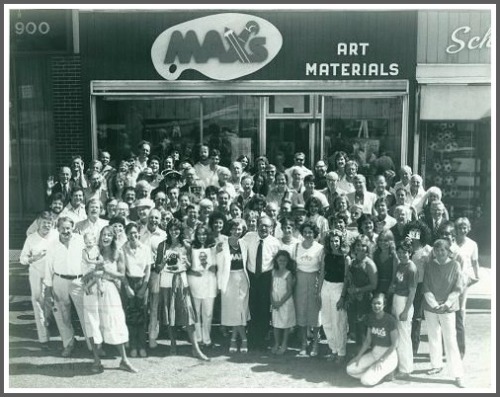 The famous 1981 photo. Max Kaplan and Shirley Mellor are in the center of the front row.

But Kennedy still has his memories — of Max’s, and the Westport community that nurtured it and its artists.

He ordered western-theme books from Stan Klein. Greenwood Press on Riverside Avenue was Kennedy’s advertising account. For 20 years he prepared their ads, brochures and promotional materials.

Kennedy did not hang out only with other artists, of course. He played in a coed softball league, with and against people from all local businesses. (“Westport had the most beautiful girls, making the game hard to concentrate on,” he recalls.)

He fished at Burying Hill Beach. He bought skis from Sport Mart on Main Street, and played tennis with a racquet from Schaefer’s (next door to Max’s).

“Through the years, the best talent in the world walked through its doors,” he says. “Red Wexler, Walt Spitzmiller, Bob Peake, Bob Heindel, Tony Ravieli, Stan Lee, Randy Enos, Miggs Burroughs and so many others.

16 responses to “An Art Director Draws On The Past”