In the beginning it was a pocket-size park at the corner of “State Street” (Post Road) and Main Street, around the corner from the entrance to the original Westport Public Library.  It featured benches, flowers, and a fountain donated by the Sheffer family.

In the 1960s it became known as Needle Park.  That’s where Westport’s alleged heroin users — both of them — allegedly shot up.  In reality, it was just a great hangout for high school kids smoking a little weed.

When the library moved a few hundred yards south — replaced by Starbucks, a short-lived restaurant, a few ever-changing retail outlets and (of course) a bank — the park was spruced up by developers.

"Needle Park," in one of its many incarnations.

Quickly, it fell into disuse.  Yet it was always there, a handsome reminder of the library’s storied past, and one of the few places on Main Street to rest when your shopping bags got too heavy.

Now, “Needle Park” — as it’s still (now affectionately) known — is no more.  Construction equipment is busy tearing it up.  Soon, it will be reconfigured into a  store entryway.

A construction worker said it will still look “like a park.”  He did not know any more details. 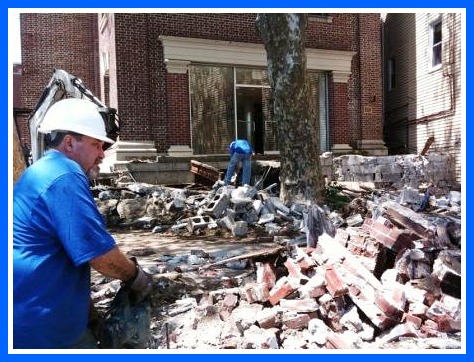 I thought a deed restriction promised it would be a park “in perpetuity,” but realtor Mike Calise — who is not involved with the project — says no.  He says that when the library relocated in the mid-1980s he proposed the town receive the small property in a land swap, but first selectman Bill Seiden said no.

Mike says that “public access” will continue to be guaranteed — but that just means no one can shoo you away if you have lunch on the new steps.

It’s a small change for downtown Westport, but it augurs bigger ones ahead.  Across the street from the now-defunct park sits the handsome Bedford building, first a hotel and then the original Westport YMCA.

When the Y vacates the property 3 years from now, who knows what will happen there?

At least we know we can sit in a new park — or, if that does not come to pass, on the steps across the street — and watch.

35 responses to “No More Needle Park?”