Hail To The Chiefs

Westport — a national leader in areas like hedge funds, education and nannies — would seem to be a natural for presidents too.

Besides passing through on the railroad or highway, our town has few connections with our commanders-in-chief.

George Washington, of course, slept here — he slept everywhere.  In 1780 he is said to have discussed war strategy with the Marquis de Lafayette and Comte de  Rochambeau at the Disbrow Tavern (where Christ & Holy Trinity Church is today).  He returned twice in 1789 as president, coming and going on an inspection tour of the Northeast.  He spent 1 night at the Marvin Tavern — located on the Post Road, opposite King’s Highway South — but did not have a bang-up time.  In his diary, he called it “not a good house.”

This may be the only time Millard Fillmore appears in my blog. Or any blog.

Millard Fillmore was a guest at Richard Winslow’s “Compo House” mansion on the North Compo/Post Road corner (it later became a sanitarium, then was torn down before tear-downs became fashionable).  But he was here 6 years after he left office.

Abraham Lincoln supposedly stayed at Hockanum, Morris Ketchum’s Cross Highway estate near Roseville Road, during his presidency.  Woody Klein‘s history of Westport says only that Salmon P. Chase — Lincoln’s Secretary of the Treasury — was a frequent guest.  Hockanum still stands; there is a “Lincoln bedroom” upstairs, and the deed states that no changes can be made to that room.

Franklin D. Roosevelt spoke on the steps of the YMCA’s Bedford Building during his re-election campaign of 1936.  He was the 1st sitting president to visit since George Washington.  In addition, FDR’s grandson David lived here for several years in the 1990s.  And FDR’s wife, Eleanor, often visited Lillian Wald’s South Compo “Pond House.”  I know, I’m stretching here… 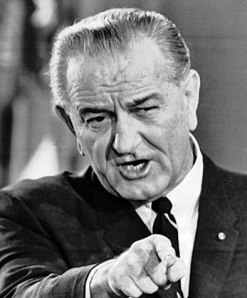 Lyndon Johnson was friendly with Supreme Court Justice Abe Fortas — so friendly that that helped scuttle Fortas’ nomination to be Chief Justice in 1968.  Fortas had a summer home on Minuteman Hill, and some beach residents say that Johnson was an occasional guest.

Bill Clinton trolled here for money, before and during his presidency.  As president he attended fundraisers at the Inn at National Hall, and a private home on Saugatuck Avenue.  Both were low-key affairs, if you don’t count the 25-car motorcades, sharpshooters on top of buildings and helicopters whirling overhead.

Westport has had better luck with presidential candidates.  Like Bill (and Hillary) Clinton, in recent years many have made their way here — more for fund-raising than actual vote-seeking.  Who knows?  Soon, Sarah Palin may come to town.

8 responses to “Hail To The Chiefs”