It’s easy to commute on auto-pilot. But over the past few months, alert commuters have noticed activity at the west end of the Greens Farms railroad station.

Workers cleared brush, and removed old equipment. “06880” reader Scott Smith figured they were creating a staging area for the forthcoming replacement of the Beachside Avenue bridge.

But now there are new, striped spaces. The addition to the lot looks permanent.

Police chief Foti Koskinas — whose department oversees railroad parking operations and facilities — says that while part of that area will indeed be staging. the town has added 54 new parking spots there. Twenty-four are for permit holders; 30 are for daily parkers.

Koskinas says the town took advantage of the upcoming bridge work to add to their long-term lease with the state.

The new parking spaces will be available later this coming week. For safety reasons, the Police Department is waiting until permanent lights are installed. 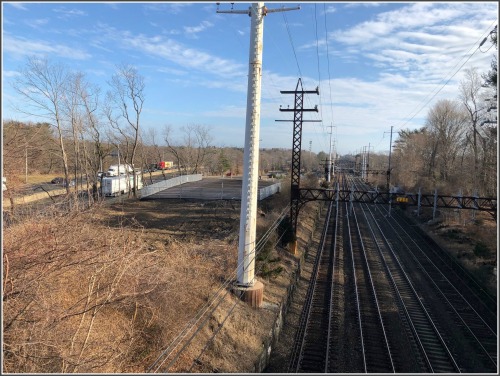 Another angle showing the new spots. This view is looking east. (Photos/Scott Smith)

Greens Farms is not the only rail station in town with added parking. Koskinas says that 17 new permit-only spots have been added on Franklin Street, near Lot 7 (the one just north of the I-95 overpass) and Lot 3 (the big lot on Ferry Lane, south of the tracks).

Feedback from commuters has been great, Koskinas says. And that’s just from those who were alert enough to notice them.

(Click here for a map of the all parking lots at the Saugatuck train station.)

Hundreds of commuters saw Sunday’s “06880” post, on commuter parking at the railroad stations.

But no one read it more avidly than Fotios Koskinas.

The Westport Police Department oversees the Saugatuck and Green’s Farms stations. As deputy chief and director of railroad operations, Koskinas is the man in charge. He works closely with Police Chief Dale Call, who before his promotion handled that task.

“This is a public service,” Koskinas says. “We want to help. I meet with commuters at both stations. We’re totally open to suggestions.” The only caveats: “They have to be realistic, and benefit many commuters — not just a few.”

Koskinas offers point-by-point responses to the issues raised in Sunday’s post, and comments added by “06880” readers.

To the original complaint that “the police station is not open on weekends, or hours that a working commuter can use. If you are restricted to paying online, egregious late fees kick in”: There is a 14-day period from the date the ticket is issued to pay it. There is no late charge or fee as long as it is on time.

To the problem of paying for more than one vehicle online: Enter your ticket number, and you can pay it on the days you drive a different car.

To Jonas Shapiro, who wondered how many stickers are held by people who hardly ever use them: People who pay for permits but don’t use them subsidize everyone else who does. We issue more permits than there are spaces. The formula is based on the the number of vacant spaces over time. If permits were issued only on the number of spaces available, the cost per permit would be far higher — and the wait for a permit far longer.

To Tom Prince, who commented on large cars parking in “compact” spaces, the use of “favored” parking, and seemingly able-bodied people parking in handicap spaces: There are no specific spaces marked for “compact” cars. If some are narrower compared to others it is because at some time someone painted a narrow space.

As for “favors”: No one should get to park for free “just because.” But that same officer also finds places for people who are running late or even on time but can’t find a spot, as well as employees who don’t have parking.

Handicap permit misuse is not limited to the train station.  Enforcing that means stopping every “healthy” looking person to find out what their handicap is. Cars parking in a handicap spot without a permit receive a $25 ticket.

To Pinya Klotz, who said that parking permits should be available to any resident who pays property taxes on their vehicle, without a wait list and on a first-come, first-serve basis, and who asked for an accounting of the parking fees: Parking is already first-come, first serve for permits and daily spaces. I’m not sure how giving every resident who pays taxes would work in practice when the demand already far outstrips the supply.

The revenue is managed by the Finance Department. The budget is public and goes before the Board of Selectmen, Board of Finance and RTM every year.

To Michael Smith, who discussed differences in lists between Westport and Weston residents, and long wait times:

The previous system of two lists ended last year (the state has a say in this). Currently the earliest date on the list is January 2010. The delay in issuing permits comes about because we have to give people time to respond. Because contact information changes, we follow up with letters and a phone call. Currently, about 30% of those contacted actually buy a permit. The rest either decline or never respond back. We are always trying to find a better way to get through the list.

To Bart Shuldman, who commented on a $50,000 license plate scanning device: We have a $20,000 license plate reader that identifies parking scofflaws and, when working properly, identifies non-permit vehicles parked in permit- only spaces. That was re-appropriated from a request in the railroad parking budget for a new truck that we did not purchase (we re-purposed an older truck for the custodian to use).

To Nancy Hunter Wilson, who wondered why there is no shuttle bus to the station: There is one. It exists from the Imperial Avenue parking lot to the train station. The average daily vehicle count in that lot for that shuttle is 12-14 cars.

To Nancy Hunter Wilson, who also said that inside tags, rather than outside stickers, could be easily moved from one car to a spouse’s if needed: Anyone needing to drive a temporary vehicle should contact Railroad Parking. Let us know the plate number, and put a note with the permit number in the windshield. This works most of the time, except when something gets lost in communication.

(For more information, or to contact Railroad Parking, click here. Deputy Chief Koskinas is also available at 203-341-6061. He is happy to field any questions, answer any concerns, and try to implement solid suggestions.)