The weather may be cold.

But it’s the hottest ticket in town.

This annual gift to the Westport community showcases the diverse talents of Staples musicians (and their teachers). There’s music from around the world, and of course the opening “Sing We Noel” processional, inspiring “Hallelujah Chorus” and creative production number.

Performers include choral and chamber groups, orchestras and bands. This year marks the Candlelight debut of band director Phil Giampietro.

Because it’s a gift from the Staples music department, tickets are free. But they go very fast. They’re available to the public starting at 9 a.m. on Monday. November 25. Click here then to get yours!

More than a year ago, “06880” posted a request. The Staples High School music department was preparing for its 75th anniversary Candlelight Concert — 13 months away — and needed old programs and recordings for a display. They figured a few might trickle in.

The trickle became a torrent. Audio recordings — records, tapes and CDs — of every concert since that year (except 3) poured in from across the country. So did most printed programs since ’53. (It’s uncertain whether any programs or recordings were made between the very 1st Candlelight in 1940, and 1952.)

Then the fun began.

As anyone who has ever attended a Staples performance knows, the music department does things in a big way. Concertgoers tonight and tomorrow will see a lot more than a simple display.

Staples parent Jeff Hauser spent weeks processing the files. A Brooklyn company digitized the old vinyl LPs. However, they returned only 1 computer file per side. Someone had to hand-split those sides into individual songs — and consult the programs to find out the name of each one.

Staples senior Devon Murray volunteered many hours creating elegantly written software. It allows everyone to click on a particular year, then listen to whatever they want. He’ll be in the lobby, standing near laptops to help anyone (from the Class of 1953?)  who needs help.

In 1979, the annual concert was already 39 years old. Some of those performers — now with their own children out of college — will return this weekend.

Staples parent David Pogue took time off from his PBS Nova/CBS Sunday Morning/Yahoo tech jobs to cut apart songs from some of the 1950s concerts. He also loaned the laptops and headphones for the kiosks.

Pogue had fun watching Candlelight evolve. He says, for example, “what we consider a lovely soloist has changed a lot over the years. In the ’50s they were usually given to girls with light, warbly voices, with very fast, fluttery vibratos.”

Pogue also noticed changes to the printed programs. In the 1960s each program says at the top: “Please do not applaud during the program, since the entire concert is being recorded.”

These days, he notes, the show is recorded ahead of time, “without any pesky audience members to ruin the effect.”

The front of the 1962 Candlelight program.

The audio and program displays are two more added attractions to this weekend’s very special 75th anniversary concert. But if you don’t have tickets, don’t bother going. They were sold out weeks ago.

On the other hand — as noted before, Staples’ music department does things in a very big way. Tomorrow’s (Saturday, December 19, 8 p.m.) performance is being aired live on WWPT-FM (90.3), and broadcast live on Cablevision Channel 78.

If you don’t live within range of radio or TV — no prob! Just click here for a livestream.

You can enjoy Candlelight anywhere in the world. All you’ll miss is the kiosk.

There were a few things new too, like the choir’s world premiere of Don Rickenbach’s “Santa Claus Visits Mother Goose Land” production number. 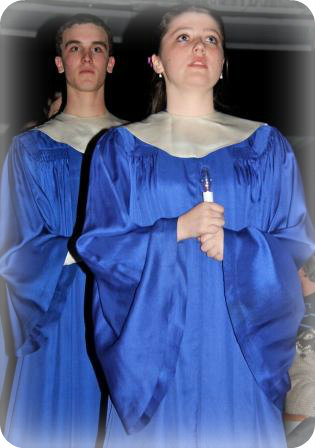 The “Sing We Noel” processional has been part of every Candlelight Concert since 1940. (Photo/Lynn U. Miller) 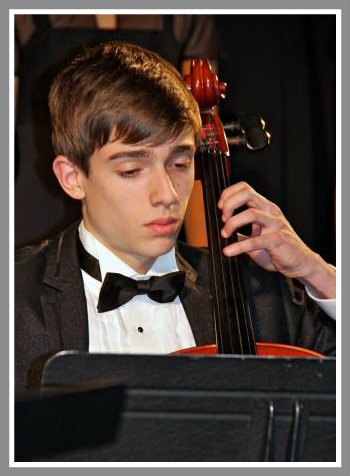 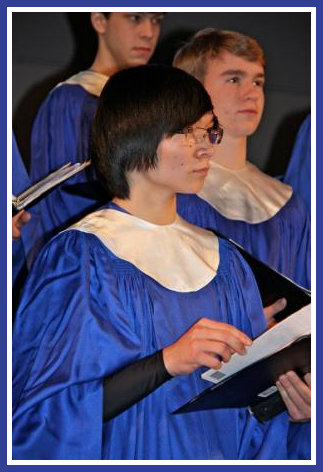 The a cappella choir’s selections ranged from “Schindler’s List” and “Carol of the Bells” to “Deck the Halls.” (Photo/Lynn U. Miller) 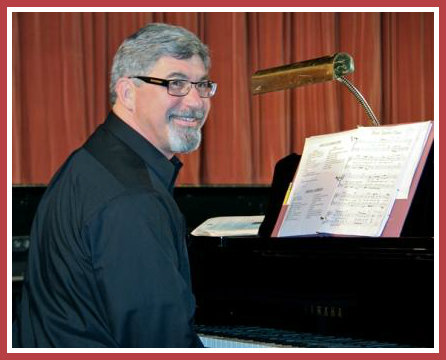 Don Rickenbach composed a new — and very clever — production number for the choir. (Photo/Lynn U. Miller)

All Candlelight, All The Time

If you love the Staples Candlelight Concert — and who doesn’t? — what could be better than hearing it again on radio?

How about hearing the last 11 Candelights played non-stop, beginning tomorrow (Friday) afternoon and continuing straight through early next week?

The Candlelight Concert — the high school music department’s annual gift to the town — is a soaring, inspiring and beautiful collection of vocal, orchestral and band music. There are hymns, carols, Hanukkah and African music, and a lovably schlocky production number.

Now, thanks to the miracle of modern technology – and the good, old-fashioned hard work of media instructor Jim Honeycutt — every Candlelight from 2001 through two weeks ago will be streamed live on the internet on WWPT, 90.3 FM. (It will also run in the background as part of the school district’s stream — and will be broadcast as background music on Cablevision Channel 78.)

The Staples Media Lab began recording the concerts — actually, the final rehearsal — in 2001. The idea for the CDs — and help with the initial recordings — came from student Robert Anstett.

The program design was used for the 1st CD covers. Quickly though, the art department got involved. Now students in the Advanced Design and Technology class create the covers.

Honeycutt and his crew work hard to produce CDs in time for each year’s shows. Profits are donated to the media, music and art departments. Some of the money went to purchase a new stereo microphone preamp, making this year’s CD “the best-sounding ever,” Honeycutt says. 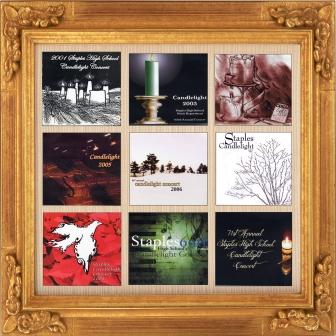 Why does he do it?

“Maybe because of my love of music,” Honeycutt muses.

“Maybe cause I think the memory of these wonderful concerts should be preserved. Maybe because I have the most amazing job in the world. I don’t know — but I’m happy to do it.”

The reward, Honeycutt says, comes from the faces of audience members leaving each concert, who are thrilled to have CDs of the impressive performances. One mother owns every one.

Now, musicians, alumni, parents, Candlelight fans — and anyone else with an internet connection — can enjoy 11 years’ worth of wonderful concerts.

It’s the music department — and Jim Honeycutt’s — gift to the world.

(Click here to listen live to WWPT-FM. And — though this has nothing to do with the Staples Media Lab — hard-core Candlelight addicts can listen to the 1972 concert, available through Westporters.com — click here, then click on the lower left corner.)

For nearly 70 years, the local holiday season was heralded by Staples’ Candlelight Concert.

Founded in 1940 by legendary music maestro John Ohanian, it’s survived wars (both military and cultural), changes in education, and the school’s move from Riverside Avenue  to North Avenue.

Alumni -- like these choir members from 1979 -- attend the Candlelight Concert every year.

Sure, a couple of decades ago, the band joined the choir and orchestra onstage.  But the concert may still be the only place in the world the haunting and obscure “Sing We Noel” processional can be heard these days.

Yet now the Candlelight Concert is starting to fade away.

The same times are set for this year.

The idea was to provide more opportunities for parents for young children, and senior citizens.

That’s commendable.  But it misses the mark.

Young kids are not the target audience.  And seniors could be served by a dress rehearsal on Friday afternoon — an idea the music teachers favor.

The final Saturday show has always been the most festive — high-energy, emotional, a true kickoff to the holiday season.  It’s been something Staples musicians look forward to their entire high school careers — because the seats are filled with alumni.  All are invited on stage for a rousing finale:  the “Hallelujah Chorus.”

Alums — off in college, or no longer in town but back for the holidays — know there will be seats available at that final show.  They don’t get them ahead of time, as concert-goers do for the other ones.

The new schedule — with 2 p.m. and 8 p.m. shows — means that hundreds of musicians spend an entire Saturday, right before the holidays, backstage or onstage.  That’s a lot to ask.

Then there’s the ambience.  “How can you have a Candlelight concert when there’s sunlight streaming in the back door?” one frustrated performer asks.

Some traditions change.  Some are worth saving.

For 7 decades the Candlelight Concert — twice on Saturday night — was one of the best.