Weston Gets Some Satisfaction

“06880” seldom covers weddings. Even celebrity ones.

And it’s rare that we venture beyond our town borders. Even for a celebrity wedding.

But it’s not every day that Keith Richards’ daughter gets married next door.

Alexandra Richards is a celebrity in her own right. She’s following in the footsteps of her mother: Supermodel Patti Hansen is married to the Rolling Stones’ guitarist.

Theodora, Keith and Alexandra Richards. This photo is NOT from the wedding reception.

But she’s still a local girl. According to the New York Post:

Although both of their parents were international superstars, the Richards girls were raised in quiet Connecticut, where Keith and Patti still live, and where Alexandra and her director-cinematographer fiancé Jacques Naude, who hails from South Africa, go on the weekends to get away from fast-paced NYC.

“I loved growing up there,” she says. “A lot of people think I was raised in LA, but I’m like, ‘Noooo. I’m a Northeastern kinda chick.’ We had this little house in the woods, and we were so disconnected from the hustle and bustle. Although I didn’t know what that meant until we were obviously a lot older. Now I’m running home every weekend to my parents, like, ‘We’ll cook for you!’ It’s cozy. I’m a family girl.”

Alexandra loves Weston so much, it’s where she decided to get married. The reception was held last night at Lachat Town Farm.

An alert “06880” reader joined neighbors who watched from a distance. The Richards’ house is not far to the farm. Golf carts shuttled guests from the house. Other people arrived by small buses, earlier in the day.

The neighbors — who got their information from security guards — said the main course was lamb. Cheers could be heard, apparently during speeches and toasts. 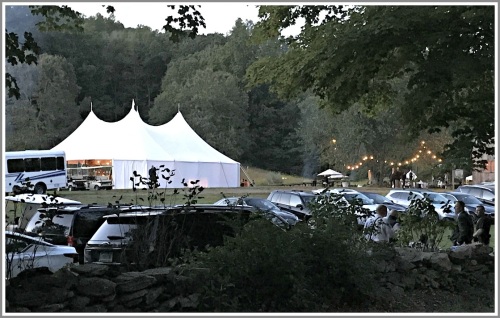 The wedding tent at Lachat Farm.

Guards also said they did not think Mick Jagger was there.

A few of the people watching had garden plots at Lachat. They had been miffed at being discouraged from visiting their plots for a few days, as the site was readied for the reception.

Their spirits rose when they found out why. One woman said, “Alexandra could have had her wedding anywhere in the world, but she chose our little farm. What a feather in the town’s cap.”

Our correspondent did not have any information on the band that provided dance music.

Or whether the father of the bride joined in.