Back in the day, students learned their grades 4 times a year: the end of each quarter, when report cards came out.

Today — isn’t technology wonderful? — kids can access their grades any time they want. Some check them many times a day.

Almost as often as their parents do.

But — isn’t technology a bitch? — until recently, Staples students (and their parents) were frustrated by Home Access Center. That’s the website that works well on a desktop or laptop, but is very hard to view on a mobile device.

Sometimes — this is a true First World problem —  it doesn’t even load. Grrrrr! 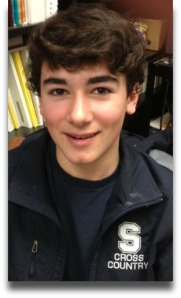 Into that frustrating breach rode Dylan Diamond. Only a freshman  — who apparently didn’t get the memo that he shouldn’t start freaking out over grades for a few more months — he developed a free iPhone/iPad app.

Staples and middle school students — and their parents! — can easily view all grades, class assignments and transcripts. It lists grades from previous marking periods. And a “Remember Me” feature means that (unlike the website) you don’t have to log in each time.

Up next: push notifications, for new assignments.

This is not Dylan’s 1st app. Last year at Coleytown, for a science assignment, he created “MyMoonPhase.” Showing the current moon phase, with a description, it’s been downloaded 3,000 times, all over the world. 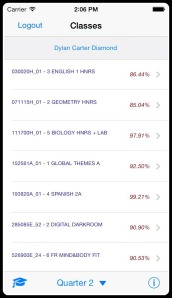 The MyHAC screen shows Dylan’s grades. He had a 97.91 in Biology Honors.

“My HAC” has been out for just a few weeks, and its relevance is limited to Westport. But it’s already recorded 600 downloads. (And that’s just for iOS devices. There’s no Android or Windows phone version.)

Dylan — who is also a cross country and track team member, and worked on lighting for Staples Players’ Thoroughly Modern Millie —  is largely self-taught. He took a course in New York last summer on app development, but most of what he knows comes from research on — of course — the internet. He enjoys creating apps, because he has the freedom to do whatever he wants; the process is creative, and the final product helps people.

The toughest parts of creating “My HAC,” Dylan says, were making the app fully compatible with Westport’s servers, and ensuring that all data was secure. Once he figured that out, it took just a couple of weeks to finish.

Dylan can’t use the Westport Schools’ logo. But school officials — and his computer teacher, Nate Dewey — think it’s great. As do all those students checking their grades. at this very moment.