When I say “jerky,” odds are you don’t immediately think “Brooklyn.”

Field Trip — the hot producer of healthy, protein-rich snacks in sticks and bites ranging from beef, chicken, turkey and pork to jalapeño, cracked pepper and everything bagel — has just moved its headquarters here, from New York. 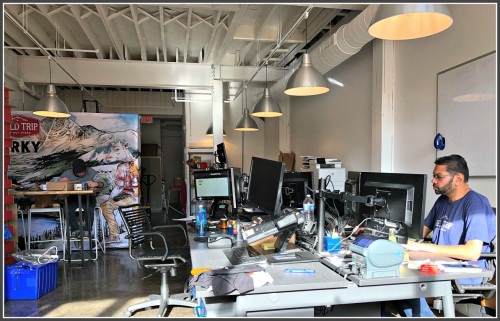 The Field Trip office on Post Road East is directly opposite Design Within Reach.

But this is the only Field Trip store in the world. And they won’t open any more.

The story begins with Matt Levey. Now 37, he grew up partly in Weston. He spent nearly 10 years in finance, but 7 years ago — after loving the jerky sold at Singleton’s, a country store near Okemo Mountain where hunters brought meat to be smoked, then sold as jerky — he and 2 partners quit their jobs.

“New York is filled with people who wanted healthy food, like jerky,” Matt says. “But all they could buy was gas station junk.”

Field Trip offers a wide variety of jerky. It is definitely not junk.

He and his partners rode bikes all over the city. They sold their product — literally — store by store.

Field Trip is big now. So big that they’ve moved from Brooklyn to Westport.

Matt always liked this area. He, his wife and young kids just bought a house in Greens Farms. One of his partners is moving here too.

The new headquarters was not a hard sell for his employees. One commuted 2 1/2 hours from Long Island to Brooklyn. Surprisingly, his drive to Westport is half that. Another found it’s only a few minutes more from Harlem than before.

They’re finding downtown Westport to be fun. And Matt found that the empty storefront next door to his new office — directly across from Design Within Reach (the old post office) — was perfect for a Field Trip storefront. 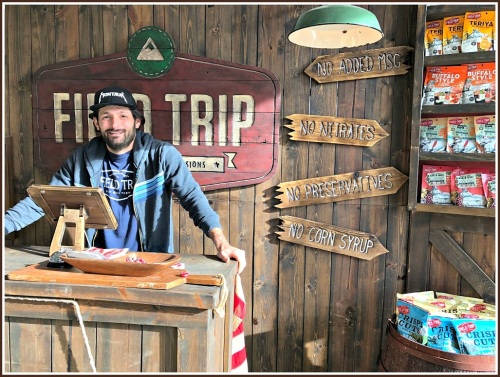 “This area reminds me of when I was a kid, walking around downtown,” he says. “Little Kitchen had 2 little tables, a couple of doors down from Westport Pizzeria. Klein’s was like a mom-and-pop shop.

“We’re small, but fast growing. And nothing brings out a small town feel like a jerky shop.”

Last week, Matt was busy building a picnic table that will sit in the center. One counter and several walls were filled with jerky products (and Field Trip blankets and t-shirts).

The Field Trip counter: fun, and filled with great-tasting products.

Matt is particularly proud of his everything bagel jerky. It’s a hot new flavor trend — and he’s trademarked the name.

But, Matt notes, the storefront is less about making money than bringing enjoyment to people — and life to downtown.

“This one is for Westport,” he says.

Brooklyn, eat your heart out. And Westport: Eat up!