Following a failed alien invasion the world is left sparsely populated with psychologically scarred survivors, some of them technologically-enhanced women. Lo, leader of the small safe haven of Saugatuck,…

Whoa! Does our little town star in a very intriguing work by that rare species: a female science fiction writer?

Hatton — an Australian who grew up in Tasmania, earned a master’s in American history in Melbourne, and a Ph.D. in the same subject at Cornell — landed here when her husband got a job in Stamford. They knew Westport was a beautiful town, and heard it was “open-minded and open-hearted.” They bought their 1st house on Treadwell Avenue in 1998, attracted by the nearby water.

Hatton was a freelance writer, which worked well. She wrote all morning, then had lunch on the beach. She wrote again in the afternoon, and grabbed dinner somewhere in the neighborhood. Some days, she gardened — and thought.

She and her husband planted a small apple orchard. She calls it “a charmed and charming period” in their lives.

“We spent perhaps too many happy hours in Viva’s and Dunville’s,” she laughs. But she volunteered at the Westport Historical Society, and met friends through New Neighbors.

With Turkish friends, they bought a boat and spent every summer weekend on the Sound.

When Hatton and  her husband were bored, they played a game: “Looking for Keith Richards.” They’d head to lively bars with great music, like the Georgetown Saloon. They never found him.

They moved in 2003 for work reasons — first to a minimalist place in New York City, then to the magical old streets and canals of Amsterdam. They’re still in the Netherlands, but Hatton calls Westport “the most beautiful place I have ever lived.”

The town remained vivid in her mind. Hatton always wanted to set a story here. She began writing a murder mystery, but that genre in a New England setting seemed like a cliche.

One day, rooting around for a more original premise, she recalled the one thing she’d always found strange about Westport: “there are no men there during the day.” Suddenly, she wondered: What if all the men were not just at work in New York?

Then she realized: If the men never came home, the place would still run. Women already maintain the properties, organize the activities and run errands all day long.

They manage many shops, and the small businesses operating out of big homes: freelance consultancies, part-time practices and the like. 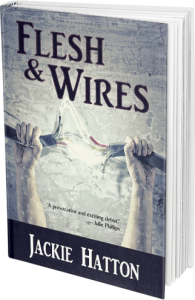 Hatton kept thinking: How would women handle a real crisis? So she added aliens.

Despite their circumstances, the women in Flesh & Wires — who have created an oasis of civilization in Saugatuck — still care about home decoration, gardening, cooking, dancing and clothes. She included those details because she believes that making things beautiful can be a way of “dealing with darkness and difficulties.” How women spend their time is a serious thread throughout the book.

Of course, Hatton has a few laughs too. She turns a nail salon into a military training center. She also enjoys demolishing I-95.

The Bridge Street bridge — which may or may not be gone long before the apocalypse — serves as a major checkpoint into town. Downtown has been flooded into oblivion. And Cockenoe Island serves as a prison.

The Bridge Street bridge: While Westporters debate its future, Jackie Hatton turns it into a post-apocalyptic checkpoint.

“I’m interested to hear if Westporters find post-apocalyptic Saugatuck beautiful or horrific,” she says. “I love the new park I created, but I hate the idea of living in fear behind fortified walls.”

So what’s next, in the pre-apocalyptic real world?

“My great fantasy is that Hollywood buys the movie rights to Flesh & Wires,” Hatton says. “And then pays me to spend the summer on location in my favorite place in the world.”

More realistically, she hopes that promotional activities bring her back to Westport soon.

“There’s a margarita waiting for me at Viva’s,” she notes. “And a bar stool at Dunville’s with my name on it.”

(Click on www.jackiehatton.net to learn more about the author and her book — including a feature on how she uses Westport settings.)