First, the Hwa Chong School in Singapore had to choose a few of the top schools in the US, to invite to the elite Asia-Pacific Young Leaders Summit. The event draws 79 students from around the world — Australia, South Korea, Oman. They discuss international events and — hey, why not? — attempt to figure out solutions.

Staples made the cut.

Then, officials here had to figure out who should apply. Fifteen students were chosen. After writing essays about global issues and multicultural affairs, 2 — Jack Cody and Warren Schorr — ended up halfway around the world.

The pair — both seniors — have the eclectic backgrounds organizers sought. 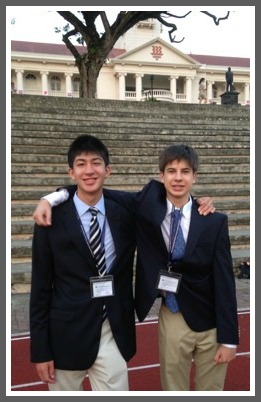 Jack played baseball, and organized Westport Little League’s Challenger Division for youngsters with disabilities. He hosts a radio show on Staples radio station WWPT, and is a member of Kool To Be Kind. He has lived in Westport all his life.

Warren grew up in Honolulu. He plays violin in Staples’ symphonic orchestra; is on Saugatuck Rowing Club’s varsity crew, and teaches guitar to Bridgeport children.

Jack and Warren’s diverse experiences came in handy during their week in Singapore this past July.

Students from each country were given different global issues — pertinent to their nation — to research and present. The Australians talked about slavery. Japanese students discussed national disaster relief. Indians had gender inequality.

The Americans — 6 others came from Scarsdale (NY) and Dominion (VA) High School — grappled with Syria. Specifically, how the US should act regarding the UN’s “Responsibility to  Respect” doctrine.

It was a lot of work. Neither Jack nor Warren had spent much time thinking about Syria beforehand. But they dove into the subject. “We had discussions about issues we’d never imagined,” Warren said. “It was surreal.”

Both boys were surprised to hear anti-American political sentiments from some attendees. And not just the students: a Singaporean politician called the US “stubborn” and “confrontational.”

That struck Jack and Warren as hypocritical. “He didn’t listen to other people,” they say. 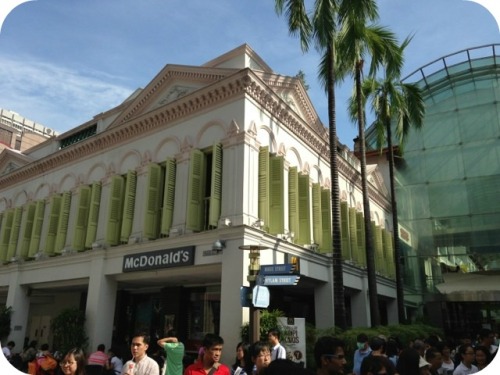 The real rewards came not from classroom activities, but interactions outside. There was paintball, hip hop dancing, dragon boating (and tea with Singapore president Tony Tan).

“Even though we’re all from different cultures, we like to do the same things,” Jack says.

“I was surprised so many people knew more about American culture than we knew about theirs,” Warren adds. “An Indian guy knew all about rap, and this Indonesian girl knew all about indie movies.”

Is that good or bad? “I’m not sure,” Warren replies.

The Stapleites — who had non-American roommates — did learn about different cultures. They also discovered things about Singapore: There are no garbage cans, but it is very clean. There are fines for nearly every transgression. And, Jack says, “it’s even more nationalistic than the US.”

Meanwhile, Jack and Warren are following the debate about  Syria more closely than they ever imagined they would.

Their conclusion? Intervening “will make things even worse.”

But until this year, it did not have a Challenger Division.

Starting soon, though, boys and girls ages 5-18 with physical or mental challenges will play baseball, just like hundreds of other Westport kids.

And they’ll do so thanks in large part to the work of a Staples High School junior. 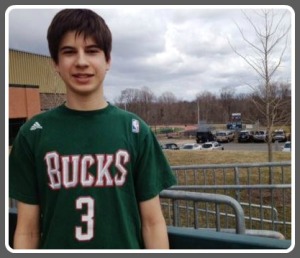 Jack Cody is a former Little Leaguer and Staples baseball athlete. For the past 3 years he’s helped coach a Little League team. He’s also a member of Kool To Be Kind, the high school mentorship and anti-bullying program.

When Jack realized that Westport Little League did not provide opportunities for children with disabilities, he vowed to make it happen.

He researched Challenger programs in towns like Fairfield and Ridgefield. He got help from Norwalk; emailed Westport Little League officials; enlisted his mother Beth as commissioner, and made a formal proposal to the board. They loved Jack’s idea — and his enthusiasm.

Then he began recruiting players and “buddies.” They assist Challenger players on the field, but encourage them to bat and make plays themselves whenever possible. 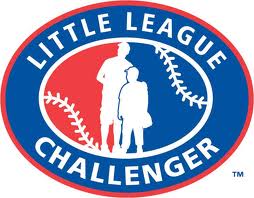 Teams will be organized by ability, rather than age. Games are a couple of innings long. Everyone bats each inning.

There is no fee. Each player receives a personalized jersey and cap. The season begins April 27 and ends June 22. Games are on weekends, in Westport and nearby towns.

“It’s really important that every kid gets a chance to play baseball,” Jack says of his favorite sport. “I’m just really glad I can help make this possible.”

PS: Baseball is not all Jack does well. He and fellow Stapleite Warren Schorr have been selected to represent the school this summer, at a summit of young leaders in Singapore.

(Parents can register players for the Challenger program by clicking here. For more information, or to volunteer as a buddy, email westportball@aol.com.)