Hail To The Chiefs!

No, not the ones from Kansas City.

I’m talking about our nation’s presidents. You know, the guys — and yeah, they’re all men — who we celebrate today in the usual manner: with special sales, no mail delivery, and absolutely no thought given to Zachary Taylor, Benjamin Harrison or Gerald Ford, let alone actual presidents like Thomas Jefferson, Theodore Roosevelt and (the big one) William Howard Taft.

Westport — a national leader in areas like hedge funds, education and nannies — would seem to be a natural for presidents too.

Besides passing through on the railroad or highway, our town has few connections with our commanders-in-chief.

George Washington, of course, slept here — he slept everywhere. In 1780 he is said to have discussed war strategy with the Marquis de Lafayette and Comte de  Rochambeau at the Disbrow Tavern (where Christ & Holy Trinity Church is today). He returned twice in 1789 as president, coming and going on an inspection tour of the Northeast. He spent 1 night at the Marvin Tavern — located on the Post Road, opposite King’s Highway South — but did not have a bang-up time. In his diary, he called it “not a good house.”

This may be the only time Millard Fillmore appears in my blog. Or any blog.

Millard Fillmore was a guest at Richard Winslow’s “Compo House” mansion on the North Compo/Post Road corner (it later became a sanitarium, then was torn down before tear-downs became fashionable). But that was here 6 years after he left office.

Abraham Lincoln supposedly stayed at Hockanum, Morris Ketchum’s Cross Highway estate near Roseville Road, during his presidency. Woody Klein‘s history of Westport says only that Salmon P. Chase — Lincoln’s Secretary of the Treasury — was a frequent guest. Hockanum still stands; there is a “Lincoln bedroom” upstairs, and the deed states that no changes can be made to that room.

Franklin D. Roosevelt spoke on the steps of the YMCA’s Bedford Building during his re-election campaign of 1936. He was the 1st sitting president to definitively visit since George Washington. In addition, FDR’s grandson David lived here for several years in the 1990s. And FDR’s wife, Eleanor, often visited Lillian Wald’s South Compo “Pond House.” I know, I’m stretching here…

Lyndon Johnson was friendly with Supreme Court Justice Abe Fortas — so friendly that that helped scuttle Fortas’ nomination to be Chief Justice in 1968. Fortas had a summer home on Minuteman Hill, and some beach residents say that Johnson was an occasional guest.

Bill Clinton trolled here for money, before and during his presidency. As president he attended fundraisers at the Inn at National Hall, and a private home on Saugatuck Avenue. Both were low-key affairs, if you don’t count the 25-car motorcades, sharpshooters on top of buildings and helicopters whirling overhead.

And, of course, in 2012 Barack Obama flew in for a fundraiser at the Beachside Avenue home of not-yet-disgraced movie mogul Harvey Weinstein. I’m sure the former president would like a do-over on that one.

Westport has had better luck with presidential candidates. Like Bill (and Hillary) Clinton, in recent years many made their way here — more for fund-raising than actual vote-seeking. Who knows?  Soon, Amy Klobuchar or Elizabeth Warren — or one of the guys — may come to town.

Though I’m guessing — for different reasons — we’ll see neither #45, nor Mike Bloomberg.

Posted in History, Looking back

For most Westporters, winter in New Hampshire means skiing.

Don O’Day packs a camera and a note pad.

Every 4 years — when the quirky New England state commands the national political spotlight — the former chair of the Board of Education, and self-described “Joe Lieberman of the Westport Democratic party” (he supported Jim Marpe for 1st selectman) heads north.

He takes a first-hand look at the men and women who — at this early stage of the presidential campaign — crisscross the Granite State. O’Day is there as they speak to small crowds, mingle afterward, and engage in the type of retail politics that the rest of the country outside of Iowa* can only dream about. 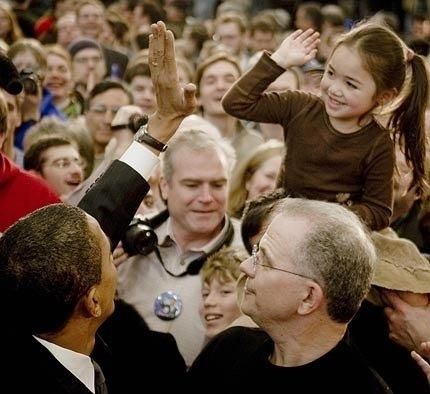 O’Day has been a political junkie since 1968. As an 11-year-old newspaper delivery boy, he was fascinated by stories about Robert Kennedy’s run for the White House.

He worked on Al Gore’s 1988 race. In 2000, when the Tennessee senator ran again, O’Day left Westport for New Hampshire to help. “It was so cool to see how folks there gathered at diners and VFW halls to see the candidates,” he recalls. “They were as engaged in politics as I am.”

His most recent trip ended yesterday (after watching a recording of “Morning Joe”). 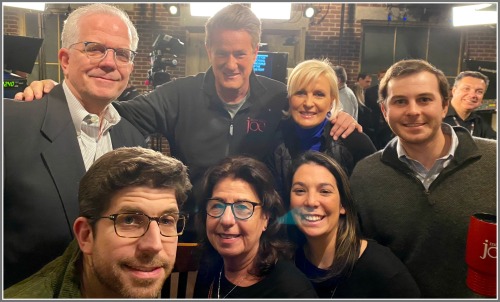 Over the course of a few days O’Day heard 7 Democratic candidates speak. He asked questions, gave feedback, and spoke personally with most.

Some encounters confirmed his earlier impressions. Others altered them.

The New Hampshire primary never disappoints. This year was no different. The crowds and enthusiasm appeared to be much larger and more enthusiastic than in the past.

My wife Toni and I and 2 of our sons (Donny and Mike — plus Mike’s girlfriend, Nicole) set out to see and hopefully talk to as many of the presidential candidates as possible, and as many times as possible.

We weren’t the only Westporters in New Hampshire. Jeff Wieser and his wife Pat also made the trip to see the candidates.

Bottom line: I have no idea what is going to happen today, other than a Sanders win – just like 2016. Second through 5th place is up for grabs, but I got the sense that Joe Biden might be closer to 5th than 2nd.

In alphabetical order, here’s what I saw:

A true gentleman and the most decent national politician I have ever met.  Letting “Joe be Joe” wasn’t the approach though, and it has hurt him.  Sorry to say that this may not be his time.

Much more than the new shiny object in the early contests (see Hart and Dean).   Pete’s crowds were huge, and his answers to every question I heard over 3 events were thoughtful and detailed. He came off as an incredibly intelligent, passionate and gifted politician. If this isn’t his time, I think it will come and soon. Maybe now.

Amy seems to be building momentum, and was my candidate going in. She also got better and better every time we saw her. She has reasonable views that are very progressive, unless they are compared to a Sanders or Warren platform.  Her chances will soar if she finishes in the top 3.

What struck me as a cult following that I mistook for simply an anti-Hillary position in 2016 is now clearly an all-out movement with deep passion. Bernie’s promise of free college, Medicare for all, a strong environmental position, and his “us versus them” message has never wavered. There were more Sanders volunteers than for any other candidate. I’m pretty sure what stopped Bernie in 2016 will stop him again in 2020. Also, Bernie is not a very nice guy. But my son did warm up the Bernie crowd we attended with a mic check.

My favorite event, because the crowds were less intense, it was held in a brewery and Tom bought everyone a beer. He has the most consistent anti-Trump message, and a very strong climate message too. He’s more than a guy with billions; his in-person persona is quite different from what you see on the debate stage. He’s not going away.

I only saw Senator Warren once, and that was at a large arena, so it’s harder to form an opinion about her from personal contact. I really admire “and yet she persisted,” and that should never stop. But Senator Warren is not the leader of the progressive movement – Bernie is. As long as he is in the race, she will not win.

The candidate who makes everyone think, and thoroughly entertains and engages you while doing it. This is just not his time, but his message is powerful and honest.

There you have it: One man’s opinions. They’re calm and measured. Please respond civilly in the “Comments” section. Overly personal attacks — on candidates, other posters or O’Day himself — will be removed.