It’s not easy being an attorney.

Law school professors can be brutal (remember “The Paper Chase“?). Getting hired is no picnic. Arguing in front of a judge and jury is not for the faint of heart.

Now imagine doing all that with a profound hearing loss.

Caitlin Parton has overcome those substantial obstacles, with perseverance, pride and poise.

Back in 1988, she was the youngest person to have cochlear implants.

She faced the intersection of disabilities and law when she and her parents fought for access to computer-assisted technology in the Westport schools.

She earned honors all through Staples High School, where she served as co-editor of the school newspaper, Inklings.

After graduating in 2003, she headed to the University of Chicago. She interned for Senator Tom Harkin of Iowa, worked at the Department of Justice and spent 2 years as a paralegal for a Washington civil rights firm, before earning a law degree from City University of New York.

For the past 5 years Caitlin has been a staff attorney at Boston’s Disability Law Center. She fights for full access to accommodations in schools, workplaces, hospitals, nursing homes, group homes and shelters.

Most of her clients are deaf or hearing impaired. Others have physical or mental disabilities.

One recent case involved a veteran with PTSD. Frightened by her landlord’s loud knocks on her door, she asked him to call or email first. He refused.

Caitlin won damages for emotional distress. Just as importantly, the landlord underwent training about disabilities — and now must honor his tenant’s “reasonable request” for contact prior to knocking.

As a member of the Deaf and Hard of Hearing Bar Association, Caitlin advocates for common-sense legal accommodations. For example, some law school professors don’t want to wear microphones, or won’t allow lectures to be recorded or transcribed.

Group members discuss how to overcome hiring discrimination. (Deaf people may be denied interviews, or judged negatively by the way they speak.)

Recently, members of the DHHBA took part in a special ceremony. Ten attorneys — including Caitlin — were sworn in and admitted to the Bar of the United States Supreme Court.

Caitlin Parton (6th from left) with fellow members of the Deaf and Hard of Hearing Bar Association, prior to their swearing in.

The ceremony took place at the Supreme Court. Fittingly — as the newly sworn lawyers watched 2 cases being argued in front of all 9 justices — there were full accommodations for deaf people.

“It’s a very small space,” Caitlin says. “There’s no room for a big screen. So the Court allowed captioning on phones and tablets.”

Being in the Supreme Court during actual cases is an incredible experience for anyone. For an attorney like Caitlin to be there “in the presence of judges and attorneys, having access to every word,” was even more remarkable. 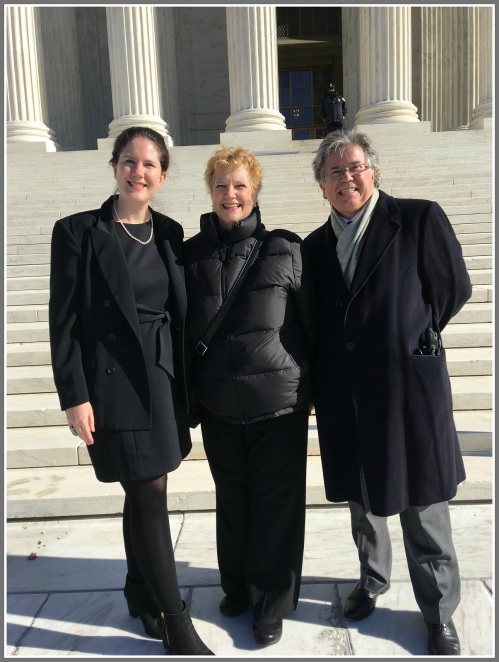 Caitlin Parton with her parents, Melody James and Steve Parton, on the US Supreme Court steps.

The swearing-in ceremony — which means that Caitlin can now argue cases before the Supreme Court — capped quite a year for the Westport native. Six months ago, her son Orion was born.

“I’m on that special journey now, balancing parenting and work,” she says.

But — with her passion, experience and, now, her admittance to the Supreme Court bar — Caitlin Parton may one day argue a case before the highest court in the land.

Who knows? She might even be behind the bench.