Kristan Hamlin: DOJ Alumni Statement Is “A Love Letter To My Colleagues”

They live all over the country. They’ve served under Republican and Democratic presidents. They’ve been United States attorneys, federal prosecutors and other high-ranking officials.

There are nearly 2,600 of them, and they’re unanimous in their belief: President Trump is abusing the power of his office. He and Attorney General William P. Barr are threatening the Department of Justice’s long tradition of impartiality. They want Barr to resign.

Among the signees: Westporter Kristan Peters-Hamlin.

The RTM member — now an attorney in private practice — spent many years in the Washington, DC US Attorney’s office.

She was appointed by Richard Thornburgh, attorney general for President George H.W. Bush. 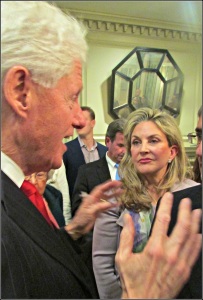 Hamlin continued serving under Barr — during his first stint as AG — and Janet Reno, President Clinton’s first pick for that post.

Eric Holder — President Obama’s attorney general — was a boss of Hamlin’s in the DC office. Robert Mueller was a colleague.

She prosecuted drug and economic crimes, along with many others.

In the Bush administration, Hamlin says, Barr “seemed like a normal attorney general. There was zero political interference.”

These days, she says, former colleagues “don’t recognize him. It’s like he’s been transmogrified.”

The letter Hamlin signed circulated among a network of former DOJ employees. The signatories share Hamlin’s outrage and sadness at what has happened to the department they love.

“The idea of the federal judiciary being able to check the executive branch goes back to John Marshall,” she notes.

When she read the letter (click here for the full text), she agreed wholeheartedly.

Still, she hesitated momentarily before signing.

“This is a president who retaliates,” she says. “And an attorney general who enables retaliation.”

She wondered about potential consequences for her. Ultimately, she realized, “This was a love letter to my colleagues. We revere the Department of Justice. We’re not willing to see it polluted and corrupted. And there are plenty of people who have sacrificed a lot more than I have to keep it impartial.”

So far, there have been no adverse reactions.

And Congressman Jim Himes thanked Hamlin — and the 3 other signees from his district — for “standing up for the rule of law.”